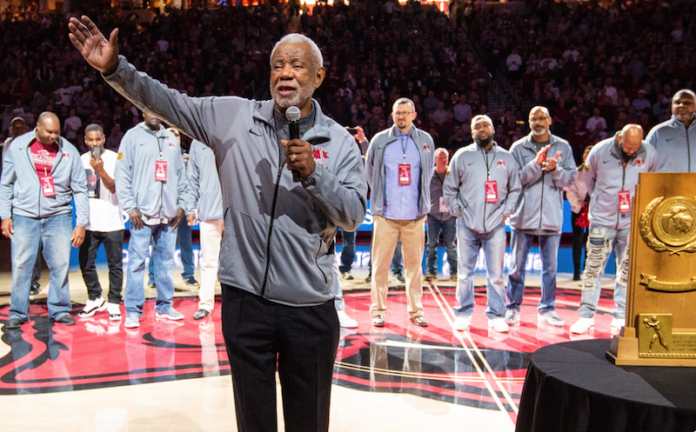 On October 20, the University of Arkansas will unveil Nolan Richardson Court at Bud Walton Arena, helping to cap the legacy of the greatest basketball coach in Hogs basketball history. It’s going to happen at 3 pm, during the first exhibition game between the Hogs and the Trojans of Arkansas-Little Rock (now coached by Razorback legend Darrell Walker).

The two Division I programs received a waiver from the NCAA to play the exhibition game, which is the latest sign of the Razorbacks’ willingness to play in-state competition. Just a few months ago, it was announced that the Lady Razorbacks and Lady Trojans would play in December. All proceeds will go to charity benefiting Arkansans impacted by flooding this past spring.

For years, Razorback fans had conducted online polls, signed petitions and voiced their desire to see Nolan Richardson, the only Hogs coach to win a national championship in basketball, honored by a court renaming. Hunter Yurachek, who arrived in December 2017, listened to them.

This past spring, a resolution for the long-overdue renaming passed:

The actual court design hasn’t yet been unveiled. But there’s an early favorite.

Last week, before Hunter Yurachek turned off his social media because of the volcanic backlash from fans in the wake of the football team’s San Jose State loss, Yurachek polled fans on what they wanted to see on the design of the Nolan Richardson Court, he told the Little Rock Touchdown Club crowd on Monday. “Anybody want to take a guess at the number one thing I received?”

“It’s an exciting moment to be able to do that in honor of Nolan, and Coach Richardson’s really excited about it. Coach [Eric] Musselman’s done a great job of engaging coach. If he’s available, he’s going to come and be an honorary coach in the Red-White game on October 5th. He’s still very much a part of our program.”

Details about the attending the Nolan Richardson Court ceremony

The ceremony to unveil the new court design prior to the Razorbacks’ exhibition game with the Trojans with doors to Bud Walton opening at 1:30 pm.

The game itself is not part of the 2019-20 season ticket package. All tickets are $10, and seating will be on a first-come, first-served general admission basis excluding the suites, courtside seats and seats reserved by the athletics department. Those that have a suite or courtside seats may purchase those by contacting the Razorback Ticket Center.

Parking for the exhibition game is free and fans are encouraged to park in the following lots: 56 (Razorback Road); 46, 56B and 60 (Leroy Pond Road); 47N, 74A and 74B (Center Street); 55, 59 and Meadow Street Parking Garage (Meadow Street). ADA parking is available in Lot 56 with shuttle service to and from Bud Walton Arena.

I attended Richardson’s Naismith Hall of Fame induction in 2014 as the only Arkansas-based reporter there. We had a great interview that morning. Find more stories about Nolan and the those who came before him in my book about race relations, Razorbacks and Arkansas history: