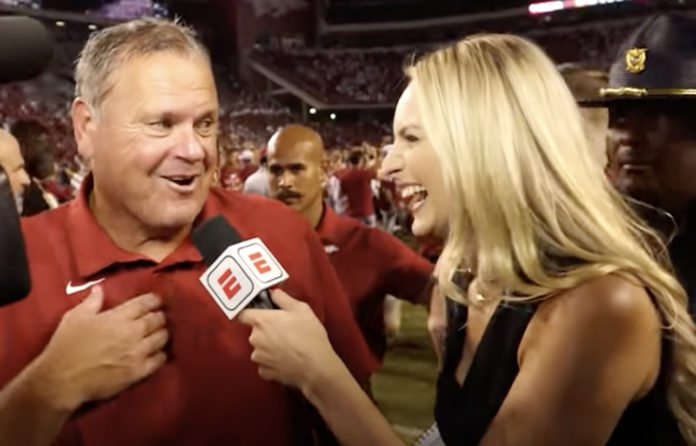 After leading his Razorbacks to a 4-0 start and their first AP Top 10 appearance since 2012, Arkansas football coach Sam Pittman has to be the runaway favorite for the steal of the 2019-20 coaching carousel.

Arkansas athletic director Hunter Yurachek’s hiring of a career assistant coach came as a shock to many throughout Razorback nation, but perhaps none more so than the poor social media manager for the Razorback football Twitter account. Pittman recalled why he had the main Twitter account blocked following his departure from Arkansas to Georgia in 2015 on a recent appearance on Barstool Sports’ Pardon My Take podcast.

“Whenever I left, I was the O-Line coach man,” Pittman told Big Cat and PFT Commenter. “I didn’t know what the big deal was but when I left, the ole fans weren’t too kind to me so I thought, ‘Well hell, I’ll just block ‘em out and I won’t have to worry about it.’

More than four years later, though, that wasn’t such a good look one Pittman became the head Arkansas football coach in December 2019. “Kyle Parkinson, our SID, came to me and said, ‘Hey do you know you have the football program blocked?’”

“I didn’t know that, but we unblocked it quick, fast and in a hurry, I can promise you that.”

Who could blame him for not double-checking the blocked list? With the likes of Mike Leach and Lane Kiffin (then referred to as a “divorced Bobby Petrino”) marked as potential options, the Georgia offensive line coach left his meeting with Yurachek less than confident in his candidacy.

“You know, I’ll be honest with you I wasn’t very far along in the process,” Pittman said. “I had talked to Hunter Yurachek for about 20 minutes about a week before I got the job.

“I went home and I told Jamie, ‘I don’t know if he does interviews out of respect because people wrote letters and all that kind of stuff,’ but I just didn’t think I had any kind of chance.”

Against all odds, Pittman came away with his dream job – the Head Hog. While the general public was surprised, those close to Pittman knew he was the man for the job. Former Arkansas linemen Travis Swanson (2009-2013) and Dan Skipper (2013-2016) both endorsed Pittman as the right man for the job.

What Separates Sam Pittman on the Recruiting Trail

What separates Sam Pittman fro other coaches was recently captured by the Washington Post’s Emily Giambalvo, who caught up with another one of Pittman’s former players, James Hurst. Hurst played for Pittman at North Carolina from 2010-2011.

“He noticed how Pittman, the Tar Heels’ offensive line coach at the time, acted like a gracious guest at his high school, not a big-timer who deserved special treatment,” Giambalvo wrote. “Pittman was the only coach who didn’t try to sway Hurst by speaking poorly about other programs.”

Hurst can’t help but notice the same love from Pittman’s other NFL products, even going on to describe him as “kind of like glue.”

“He brings people together,” Hurst said. “He’s a very unifying personality. Everyone wants to get behind him to play for him because of the person that he is.”

Pittman’s genuineness isn’t just for the recruiting trail though. He prides himself on the legitimacy of his word, and thinks that may have been just what the doctor ordered for the Razorbacks.

“We’re honest as the day is long,” Pittman said. “What we say is what we’re gonna do, I think that’s the biggest thing. I didn’t come in here with a lot of cliches and promises or anything. I wanted to reflect the state of Arkansas, which is a blue-collar, hard-working state, you know a lunch pail-type state.”

With so many used-car salesmen in the sport (think Chad Morris), it’s certainly a welcomed change of pace to see some honesty. Pittman understands that salesmanship is the lifeblood of a program, but that becomes a whole lot easier when you can vouch for the product.

“The number one thing if you’re selling something – and that’s what we are – you have to have a whole lot of people believe the same thing, and you can tell whether a person believes Arkansas is the best job in America or if they don’t,” Pittman said.

“I want a lot of guys around me that believe this is it. I know people think I’m crazy, but when I say I think this is the greatest university in the country, I do.”

He’s built quite the case for that pitch through four games this season. Wins over No. 15 Texas and No. 7 Texas A&M have leapfrogged Arkansas to No. 8 ahead of their trip to Athens. The prospect of a No. 2 vs No. 8 matchup has earned the Hogs and the Dawgs College GameDay honors, and with a good game Pittman’s Razorbacks will have a chance to further flame the spark he’s created in his short time as head coach.

With a great game in Athens, the Arkansas football program could ignite that speak into a full-fledged inferno.

“Once you get that going, your players start believing in it a bit more, and it can go up like wildfire,” Pittman said.

Here are some other excerpts from Pardon My Take’s full interview with Sam Pittman:

Do you ever find yourself still hands-on with the offensive line?

That’s a great question because it’s hard for me sometimes to take my eyes away from the offensive line, and I made a big conscious effort to coach the team.

I was so fortunate because I hired Cody Kennedy, and he was my grad assistant at Georgia before he went on and coached O-Line at Tulane. He talks the same talk as me, his coaching philosophy, the way he talks to kids, the way he uses terminology, it’s all exactly the same.

I watch every piece of tape on offense, defense and special teams and I write my notes down so I have suggestions but I try to be as even at the O-Line group as I am at any other group because I don’t want our kids to think I place more value on the O-Line than anywhere else because I really don’t.

You came from Georgia, so you have a leg up on the SEC in that you’re not a Nick Saban assistant –

[Chuckles] So that means I can maybe have against him. [More hearty laughter.]

Is there a discussion from someone like Kirby Smart that it’s tougher because Saban knows what I like to do?

I’d bet the template of everybody’s practices and their organization comes from Coach Saban.

Yeah, I do. I got on our guys last night a little bit, I said “God dang man, I’m gonna get freaking writer’s cramp.” At nine o’clock every single night our recruiting staff comes in and they do a great job.

It’s always notes and then it’s either texts, calls or film reviews from nine to ten every night. It always has something to do with handwritten notes because it’s something of the past a little bit, you know. I think there’s power in it, and it doesn’t take long to write ‘em so that’s what we do.

I used to write 25 a day when I was with North Carolina. Every morning I’d just write them, and write mommas and daddies and grandpas – anybody.

You’re known as a fantastic recruiter. What are the rules when doing a home visit?

Right when you walk in the front door you look to see if there’s any shoes sitting there, and if they are then you better hope your socks don’t have any holes on them. Half the time I don’t wear socks so when I go recruiting I know I need to, so I’ll put them on and things of that nature.

If you ever hear “This is her specialty,” you’d better chow down on it, you’d better keep eating. I’m not for sure if that’s not how I got the look I have now, you know I haven’t always had this great physique I have right now. You go in there, and you know the old stories with Barry Switzer, he would find out what kind of beer – the old story of the Pearl beer at Oklahoma – and I’m sure there’s a 100% truth to that.

This seems like a full culture swing for Arkansas, basketball, and football. How often do you talk to the Muss Bus?

[Eric Musselman] is a neat dude. He’s so much more involved in media and all those things than I am, and I get a laugh out of it. You know, it seems like every week he has a three or four-part series about going to the game and wears tee-shirts with “Pittman for Coach of the Year,” all that kinda stuff.

He’s a really good dude. High, high energy, I mean unbelievable energy. He supports the heck out of me, and hopefully, he feels the same way from me to him. It’s really kinda cool here because we all support each other – I’m talking about softball, track, every sport you know, golf.

I met with some ladies from the golf recruiting team last week, and softball as well. We just want the state of Arkansas to do well in all sports, and if we can help we certainly will. He’s that way, and he’s a wonderful person.

It’s been a while since we had a prominent power forward-tight end combo in college. Maybe we get a dual recruiting thing going with you and Muss to find a guy who can do both?

I’ll tell you this, I’d let him be the lead recruiter if that’s what the case was, he’s pretty dang good ya know. But heck yeah we’d take some of those big guys that can jump, we sure would.