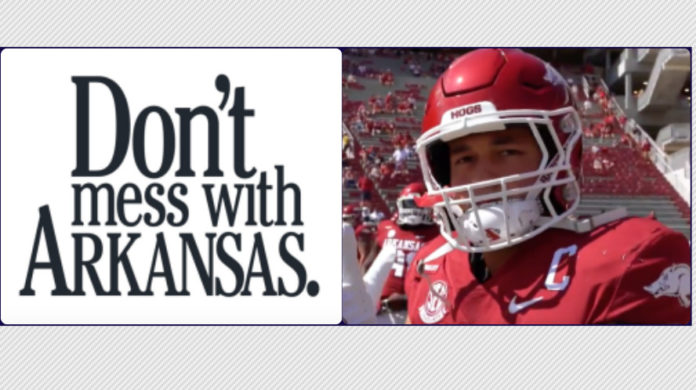 Every offseason, for the last four years, the Razorback football players and coaches wanted to believe that they were going to be the team that “turned it around” for the fortunes of the long-suffering program.

Then the real season hit. Invariably, hope withered into disappointment.

In Sam Pittman’s first year, hope endured much longer than in the Chad Morris regime but it still was a case study in feeling good about moral victories amid a season that ended 3-7 (but should have been 4-6).

Now, however, we have an entirely new beast altogether: a Razorback football team that doesn’t reach the high point of its season in July, that isn’t perpetually building a foundation for better days and isn’t trying to sell recruits on “what could be” if you only squint your eyes hard enough.

Nope. Instead, what we got here folks, is an honest to goodness team that delivers.

The first Arkansas team to start the season 4-0 since 2003, and the first to do that with all double-digit wins since 1986 (they will also be the first top 10 team in many years) doesn’t just talk about its potential. It goes out and fulfills that promise, winning the games it’s supposed to, the ones that are considered a toss-up (Texas) and now one few people gave it a chance to take before the season.

In knocking out No. 7 Texas A&M in a dominant 20-10 showing on Saturday night, the Razorbacks are doing exactly what star linebacker Grant Morgan and other sixth-year seniors expected to happen when they chose to return for a final season.

“This is why you come back,” Morgan said after a victory that has finally secured Arkansas the national respect its craved for years.

“This is why I came back. It’s why Hayden [Henry] came back. We saw what this could have been. We saw this was the possibility from last year’s team.”

“I’ll tell you right now, there’s not a single super senior that walked into the locker roomthat says, “Oh man, I wish I would’ve left.”

“I’m excited to be able to be a part of this group that’s changing history, changing how the momentum was going in Arkansas football and how we’re starting a new path.”

Who knows where that path could go?

I anticipate that Arkansas will become a top 10 in the A.P. poll this week, and could return there in a few weeks (even if it loses to No. Georgia) by beating Ole Miss and Auburn. At that point, it’s Arkansas and Alabama vying for the SEC West.

Regardless of how things turn out down the line, the path these Razorback players have trodden already impressive enough.

Beating Rice, Texas and Texas A&M to start the season is heavy lifting. And definitely worth the celebratory “We run the state of Texas now” cheers the Razorback football players let loose with here:

Afterward, in the press conference, Morgan provided some details. He said the stands that the Razorback defense made at the end, and the win in general, “was like a dream come true, like a perfect ending for the storm for Texas A&M.”

Not that Isaiah Spiller, Texas A&M running back, felt like the Razorback defense did much.

Spiller can live in his alternative universe all he wants, but the writing on the wall is clear.

“We were joking about it: ‘We own Texas now,'” Morgan said afterward. “We’re excited.The defense played well. Offense did their job. It’s a good day to be a Razorback.”

Morgan is also excited to pass down his knowledge of the game to younger defenders, in the same way former Hogs quarterback Feleipe Franks spent so many extra hours helping KJ Jefferson learn the craft of quarterbacking last year.

“I’m excited to be able to be in that spot to say, ‘Younger guys, this is how you win. This is how you continue to win.’ We have continued to do that. Our jobs aren’t done. We have big task next week.”

No kidding. No. 2 Georgia, on the road, is an immense challenge given the Bulldogs look national title favorites this season.

“Some will be quick to label this Arkansas team as a feel-good story, a flashy September storyline that will extinguished by November … or as early as next weekend, with a trip to Georgia on deck,” 247Sports’ Chris Hummer wrote.

“Discount the Razorbacks at your peril. There is talent in Fayetteville with Arkansas ranking 28th in the 247Sports Team Talent Composite. The Razorbacks have two of the best coordinators in football with Barry Odom and Kendal Briles.”

“There’s a great offensive line, a top-10 defense and playmakers at quarterback, running back and wide receiver. And you can make argument nobody out there has a better set of wins.”

“And Arkansas is a good football team, too.”

Given Arkansas has already routed Georgia Southern in Week 3, if these Razorbacks are good enough to beat the big boys in Athens, we may soon see “We own Georgia” chant may be coming down the pipeline, too.

“I did watch a lot of it because the way we were playing, I was kind of behind him and just kind of eyeing the quarterback. I knew he was moving around. A lot of times he was getting pushed out to me because of Tre.”

“Every time I know we’re in second one or third one, and we know they’re going to drop back, I’m not worried about our D line… because he’s that type of player. I’m excited for him. I’m glad that we made a really good decision in the off season to get these three guys [Tre Williams, John Ridgeway, Markell Utsey] over here.