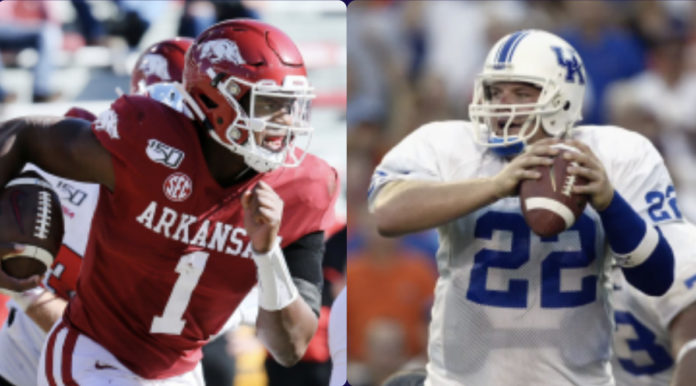 In the annals of SEC football, the king of big quarterbacks is the late Jared Lorenzon.

The 6’4″ Kentucky football star, who reached a listed 285 pounds while in college, scorched the SEC record books in the early 2000s. As a redshirt freshman in 2000, he broke six NCAA single-season records for freshmen while throwing for for 3,687 yards, 19 touchdowns and (gasp) 21 interceptions.

While he never was as prolific after that first year, he still put up some gaudy numbers over the next three years.

That includes one of the most memorable games in both Kentucky football and Arkansas football history.

In the second half of a dual against Razorback quarterback Matt Jones in what would become a seven-overtime thriller (longest game in NCAA history) that Arkansas won, Lorenzon saw Kentucky football fans from the sideline.

“Where the hell are ya’ll going?” Lorenzen yelled.

“Ya’ll are going to miss one hell of a game.”

He also ended up becoming the heaviest NFL quarterback ever and since him no college quarterback has ever matched his combination of girth and productivity (perhaps because modern nutrition programs wouldn’t allow it).

But there’s at least one current SEC quarterback who has the frame to potentially one day challenge Lorenzon in this department: Arkansas’ KJ Jefferson.

The 6’3″ sophomore Razorback quarterback, entering his first year as the starter, came into fall camp at 247 pounds.

He’s since dropped under 245 pounds, and is aiming for about 10 pounds after that. “I feel like I can still run, move and get out of certain situations still,” Jefferson said in today’s press conference.

“But I feel like me at 235, I’d be more explosive and how I want to be rather than at the weight I’m at right now.”

Kendal Briles, Arkansas’ offensive coordinator, would like to see Jefferson improve in a few areas.

Foremost would be accuracy. Jefferson’s only completed 47.2% of his college passes, far below the 65% completion rate that is his goal for the 2021 season.

“This summer, the biggest thing we wanted to work on was continuing to work on his mobility and his accuracy in practice,” Briles said.

“Whenever KJ had some opportunities to play and then when we had scrimmages in the spring, he was very accurate.”

“When we were in practices, he wasn’t as accurate.”

But one of the things that Briles isn’t worrying about is Jefferson’s weight.

“He can run and he can move and he’s got a first step, so I’m not really concerned with it,” Briles said.

“A lot of times there’s wants and there’s needs. We need him to be really, really good. I don’t care if he’s 285 as long as he’s dropping dimes on people and getting away from pressure.”

That’s the same weight that Lorenzon was listed at in college, although later he would reach 315 pounds in arena football a decade after his Kentucky football days:

But what Briles would like to see is a Jefferson do is approximate what Lorenzon did as a junior, when he threw for 24 touchdowns and only five interceptions.

Although, given Jefferson’s and dual-threat ability (which Lorenzon must definitely lacked), a more accurate “best case” scenario would be Daunte Culpepper.

Culpepper, who played around 260 pounds and was the third-heaviest NFL quarterback ever, was a three-time All-Pro quarterback. In 2004, he even set the then-single season record for the most total yardage produced by an NFL quarterback at 5,123.

In college, at UCF, he had developed into a great quarterback, throwing for a 73.6% completion rate his senior season.

Below is more from Briles on Jefferson.

Here he’s talking about how Jefferson and his dual-threat quarterback backups will react when live hitting in fall camp commences:

“These kids have been playing football their whole lives, so they understand what’s different whenever you’re getting hit. It’s all about ball protection.”

“I don’t want to say that we’re just going to run [KJ Jefferson] a bunch. That’s not what we want to do offensively. But sometimes in our play calls, things happen pre-snap/post-snap that are going to allow him to carry the football.”

“I liked the fact that you got a guy back there that if things do break down, they can create. And those are plays that God gave him the ability to do it and he does it.”

“Those are the things that I’m more excited about instead of just straight cold runs.”

“Obviously, situationally then, you will run him. But yeah, I’m very excited to see him get out there. And a lot of times for kids that haven’t been hit or are used to being hit, they want to be hit.”

“They want to have that first tackle. And it kind of knocks the rust off of them: ‘Okay. I’m ready to go.’ So I necessarily don’t love that, but kids want to play.”