Search
Home Arkansas Football Perspective If You Thought Cam Little’s Griddy Dance Was Something, Get a Load... 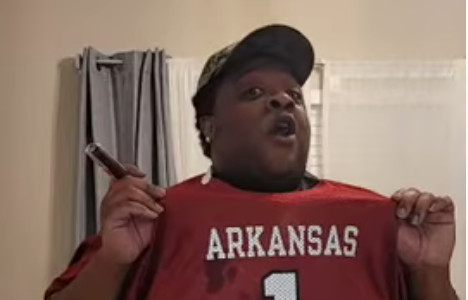 In the last two weeks Cam Little has risen from the status of promising freshman to someone who looks like he could surpass Zach Hocker as the best Arkansas football kicker of the SEC era.

Over the the last two weekends, he’s made 6 of 7 field goals that have turned out to be the difference in two close wins for the No. 21 Razorbacks. Immediately after the clock hit “0” in each win, Cam Little did something memorable. After the Mississippi State game, he consoled the Bulldogs kicker who had missed his last-second attempt.

Against LSU, Little hit the game-winner (the first of his career), and then immediately sprinted down the field to celebrate with his teammates. Part of that entailed busting out a quick “Griddy,” a celebratory football dance made famous by recent LSU football stars like Jordan Jefferson.

Afterward, the Internet had a field day with Little’s trolling of LSU:

No doubt, Cam Little ascending to “folk hero” status with performances and moves like this. It’s one thing to come up clutch in one game, as Hudson Clark did last year, but quite another to have made 6 of 7 attempts from 40 to 49 yards this season.

When it comes to the Razorback-related dance of the weekend, however, Little may have some competition.

An Arkansas Football Fan Rant for the Ages

The description of Isaac “Smooth” Barron’s Facebook page starts innocuously enough. It states “he is half of the comedy duo along with his wife Shannon Gyce-Barron. Smooth creates original and clean comedy content for all ages to enjoy.”

Not sure if you want to invite your little ones to see the below video, but it is a piece of work let me tell you.

It starts with a straight-on shot by Shannon on Isaac in what appears to be their home. Isaac is very happy with the Razorbacks’ LSU win, to the point where he is holding a bottle of wine in one hand, a cigar in the other, and is eager to share his joy with the world.

Ten seconds in, he busts out a shimmy shake tap dance that is the stuff of legends.

When Shannon inquires in why he’s dancing, he simply let’s it be known: “That’s because I got these boots on, baby!”

Soon thereafter, our would-be Arkansas football influencer lets out the kind of “pig sooooie” chant that was heard ringing throughout Arkansas after Little’s overtime kick crossed through the goalposts.

This is only the beginning, y’all. Isaac is just warming up.

He then pivots in a nursery rhyme chant around bringing the Golden Boot trophy back to Arkansas, before getting serious: “Y’all say we don’t wear no shoes in Arkansas, and live in log cabins. We kick sticks down the road, right? Well, we doing it in that boot!”

His wife adds: “And push each other in wheelbarrows.”

Then he goes into a detailed breakdown to the keys of the game, bringing his high-powered analytical football acumen to the fore:

If you like hilarious rants and things that are borderline meme-worthy, make sure to watch the whole thing below. This definitely goes down as one of the best Arkansas football fan videos of 2021:

Ol’ Isaac and the Mrs. sure had a lot of fun at the expense of LSU on Saturday night. As a sequel, I can’t wait what they put together to rub it in Texas fans’ faces after the Longhorns lost to Kansas — a fifth straight loss for a program that had not done that since the 1950s.

Here are more fun facts for Razorback fans to enjoy:

Know of more memorable Razorback fan videos? Make sure to leave them in the Facebook comments section below!