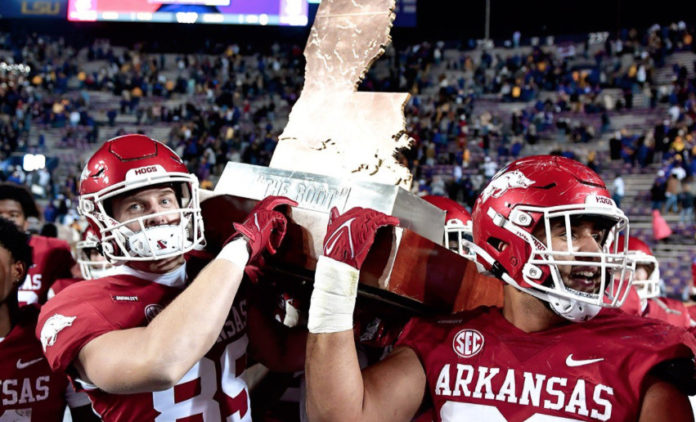 On that night in Death Valley, Arkansas simply would not die.

Coach Sam Pittman essentially called it ugly, dirty, rough, and completely unsexy. He wasn’t wrong. But sexy football is meaningless without victories. Arkansas, with one of the most balanced offenses in the SEC, had played sexy football, football filled with big plays and glimmering moments, with regularity in 2021. The Hogs hadn’t won ugly yet.

Ugly is just fine when it leads to a win over LSU. A win in a game Arkansas looked like toast for a half-hour, by the way. The Hogs had just 101 yards of total offense in the first half. Only a single series went for more than 26 yards. But Sam Pittman-coached teams don’t quit. Despite the naysaying, despite some calls for Barry Odom’s defense to get more aggressive and Kendal Briles’ offense to do the same, the Razorbacks persevered.

in the end, they left Tiger Stadium with a 16-13 overtime victory, bringing the Golden Boot back to Fayetteville and giving the Hogs’ social media team a chance to resurrect one of the best “Reno 911” memes from the depths:

Montaric Brown intercepted Garrett Nussmeier on the first drive of overtime and Cam Little kicked a 37-yard field goal to send the Razorbacks bench rushing to grab the Boot, the trophy given to the winner of the long-time rivalry game. LSU had won the last five.

“Such a hard fought game. It was ugly and beautiful and all in-between. When that ball went through the uprights, it was one of the prettiest things I’ve ever seen. To come to LSU at night and win is hard any time,” Pittman said.

Nevermind this isn’t usual LSU. Still just two years off the worst two seasons in Arkansas football history, the Razorbacks racking up wins – LSU was win No. 7 on the season and two regular-season games remain – is still something special considering the depths the program faced in the pre-Pittman years.

Those teams would have quit after the first half. Heck, we saw them do it. No such quit in 2021. Arkansas was bad. LSU wasn’t. Until.

KJ Jefferson is a Unicorn

KJ Jefferson willed his team to form. The first-year starting quarterback wasn’t going down without a fight, quite literally. He shook off countless defenders all night as the LSU defensive game plan was to hassle him as best they could, not allow him to find star wide receiver Treylon Burks downfield and keep his feet antsy enough to limit direct runs. That plan worked. But Jefferson is a unicorn.

At 6-foot-3, 245 pounds, he proved nigh impossible to bring down with a single tackler. On Arkansas’ only touchdown pass of the night, a 44-yard throw to Dominique Johnson in the third quarter that tied the game at 10, LSU came after the sophomore signal-caller. He spun out of a sack, scrambled right, darted again and kept the play alive. Eventually, downfield, he saw Johnson behind the defense. It wasn’t the world’s tightest pass, but it was on-target. As you can see at 6:30 below, Johnson hauled it in and rumbled the remaining yards to the end zone.

On the next series, with LSU driving into Arkansas territory, Myles Slusher, who had only become a regular in the secondary after Jalen Catalon was lost for the season in October, stepped in front of a pass at the Arkansas 37 for an interception. Eight plays later, and after an Arkansas fake field goal resulted in a 23-yard gain for punter/holder Reid Bauer and a first down, the Razorbacks took their first lead of the night.

“We rep a fake every week and we felt real, real confident after what they showed us,” Pittman said. “A year ago they blocked a field goal for us to tie. But the numbers were there and the kids executed it real well and Bauer turned on the wheels.”

Think about that. A fake field goal with the punter taking off around the edge in a tie game, at night, in a place the program has won three times in almost 30 years. Cajones.

Arkansas may not have actually been the better team Saturday night. They were certainly the one with more guts. LSU, for example, didn’t even stick with its starting quarterback Max Johnson, a guy who had thrown 22 touchdown passes this season, after Doug Nussmeier, quarterbacks coach for the Dallas Cowboys and father of Garrett Nussmeier, called the LSU coaching staff and said it was time for his son to play. Tigers coaches acquiesced and then saw Nussmeier throw two interceptions, including one in the end zone in overtime.

“It’s hard to describe the kids in the locker room after the game,” Pittman said. “I will say this, that’s why we coach. If they took away that time, coaching wouldn’t be as fun.”

The Tigers buckled under the pressure. Arkansas did not. With a first-year starting quarterback, a head coach who had never been a major college head coach until 2020, a limited superstar (Treylon Burks), and a defense filled with a bunch of hard-nosed college football players that don’t show up on any NFL Draft boards, the Razorbacks beat one of the most talented teams in college football.

What’s Next for Arkansas Football

Arkansas’ rebuild is ahead of schedule. The Hogs can reach eight regular-season wins for the first time in a decade with one final victory over their last two games. Alabama comes next week and Missouri follows. Arkansas hasn’t beaten the Crimson Tide since 2006. At this point, though, with a bowl game in the bag and all the confidence in the world, why shouldn’t the curse be broken in 2021?

A year that exorcised so many demons could turn special in a week. But, really, it’s special already. And the Razorbacks have earned every bit of it.