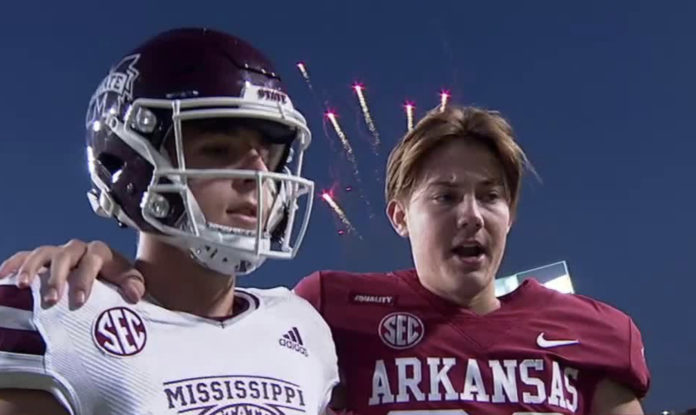 The game had barely finished and Razorback kicker Cam Little was already by Mississippi State’s Nolan McCord’s side.

McCord had just missed a game-tying field goal that cost the Bulldogs a potential win against the Hogs. Little had plenty to be excited about with his Arkansas football squad pulling the 31-28 upset, but he wanted to make sure to give McCord reassurance before celebrating with his team.

This kind of gesture is more common with today’s athletes. At the end of many college and NFL games, it is customary to see fraternization, jersey swaps and prayer huddles on the field with opponents. It’s clear that today’s player feels more of a bond with the opposition than players of prior generations did.

I’m sure a grizzled vet who played in the 1980s or before sees these post-game displays of camaraderie and wants to puke. In those days, some players played the game hoping to injure the opponent. There was a genuine disdain or hatred for those that lined up against them. It was personal. If a teammate was seen mixing with an opponent after a game, that teammate may face retribution.

There is still a big part of me that is old school. I wholeheartedly believe in the “unwritten rules” of baseball and think it’s perfectly fine for a pitcher to bean a batter in retaliation. It’s one of the reasons I love baseball so much. My traditional side does not enjoy the antics of some of today’s athletes such as the over-the-top celebrations and the flamboyance or social media trash talking.

Razorbacks Fraternize with the Enemy

However, the consideration this generation pays to the opponent is admirable. If a player is hurt and is carried off on a cart, players from both teams converge on that player showing encouragement and concern. The kids today get it that athletes, especially football players, are in the same fraternity. Even though you fight like hell to beat each other, and don’t always like one another, at at the end of the day everyone shares a common bond.

Cam Little obviously felt that bond when he approached McCord. He knew that Nolan McCord would face an immediate buzz of negativity on social media and maybe even death threats from the rabid Bulldogs fans.

Little kicked extremely well on Saturday night. The three out of four field goal attempts he made were all from 46 yards or longer. He’s the first Arkansas kicker since at least 1997 to make three field goals of that distance in a single game. And his 51-yarder was the longest by a Razorbacks freshman since Zach Hocker in 2010. On Monday, Little was named SEC Freshman of the Week for the second time this year for good reason.

But Cam Little’s empathy may be just as impressive as his leg. In approaching McCord, it’s clear he was able to feel how it would have felt if he had missed that kick instead. Little took the opportunity to show concern and support. There’s no doubt McCord appreciated it, especially on an evening in which his coach Mike Leach threw his kickers under the bus by announcing that the team would be holding a tryout for new student kickers.

Cam Little and the Down Syndrome Connection

It’s also not surprising Little would do something considerate for someone else. The Oklahoma native announced at the beginning of the season he was donating $10 for every made field goal to the Down Syndrome Connection of Northwest Arkansas, an organization that offers support to individuals and families dealing with the condition.

In an NIL era in which so many student-athletes are thinking about how to monetize their own personal brand, Little makes sure that he’s also using his Razorbacks celebrity as a platform for philanthropy:

“My little cousin has Down syndrome back in Oklahoma City, and I’ve grown up around him, hung out with him since I was 5 or 6. He’s 17,” Little told Whole Hog Sports in September. “To give back to an association like that, it’s so personal to me. It’s great.”

Little’s parents have obviously done something right. As a parent myself, the biggest thing I want my 12 and 10-year-old boys to do is ‘The right thing’ and do it all the time whether it’s at home, school or on the field. A mindset that keeps your actions unto others at the forefront.

That’s important to Arkansas football coach Sam Pittman, too. After Georgia throttled Arkansas, Pittman was seen hugging some of his former players. He wasn’t going to let a bad, disappointing loss get in the way of acknowledging players he had a tight relationship with. It was the proper, appropriate thing to do and was important to Pittman.

In listening to Pittman, you can tell he uses a common-sense, down-to-earth approach in dealing with his players and probably every one. It’s also easy to see that there is more to him than winning football games. The values you learn growing up in small-town Oklahoma haven’t left him just because he became a successful coach. That’s the kind of guy I want coaching my kid.

It wouldn’t surprise me to see Pittman stop on the side of the road and help someone change a tire. Of course, it really wouldn’t surprise me to see UA baseball Coach Dave Van Horn or UA men’s basketball coach Eric Musselman do it, either. (Ok, on second thought, Musselman may just call AAA.) At any rate, a lot of Razorback athletes have had good role models to learn from.

In today’s society with all of the tension and division, we’ve got plenty of cutthroat. We need a little compassion. That’s what Little showed on Saturday. It’s a gesture that hasn’t gone unnoticed, and has made an impact on more than just Nolan McCord.