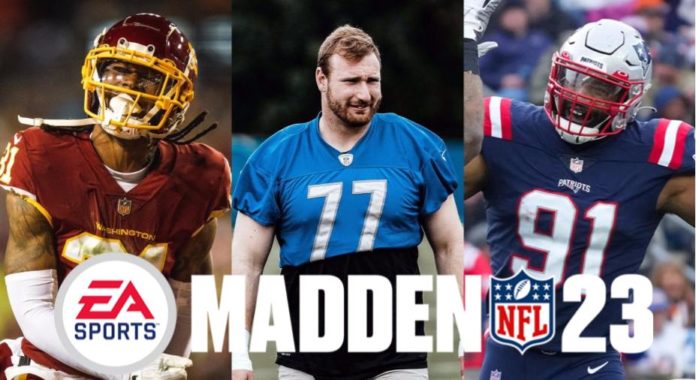 Over the past week, EA Sports slowly revealed all of the updated player ratings for its wildly popular Madden video game and several former Arkansas football players were sprinkled throughout the releases.

Best of Arkansas Sports has compiled all of the Razorbacks-turned-pros into one list and ranked them based on their overall rating (the higher the better) on Madden NFL 23.

There are a few surprises throughout the list, but the top couple are as you’d expect. It’s also worth noting that Trey Flowers and the 40-year-old Jason Peters — who have been two of Arkansas’ best NFL players the last several years — are not included because they are currently free agents and haven’t been rated.

Even coming off a season cut short by a toe injury that required surgery, Frank Ragnow’s Madden rating dropped by just one point and is still the highest among the Razorbacks’ former players in the NFL. It’s hard to argue against that. When healthy, a case could be made that Ragnow is even better than the fifth-best center in the league, which is where he’s ranked by Madden. He was a second-team All-Pro selection in 2020 and his 86.7 Pro Football Grade ranked second among centers through four weeks, at which point he got hurt.

Of course, as good as the former first-round pick is on the field, Ragnow is even better off it. He recently created an organization called “Rags Remembers,” in honor of his late father, Jon “Rags” Ragnow, who unexpectedly died of a heart attack while Ragnow was at Arkansas in 2016. The foundation’s goal is to “provide relief for kids and families who are grieving over the loss of a loved one by introducing them to the great outdoors,” according to the Detroit News. He also just helped raise more than $50,000 at the Lions’ inaugural “Dine with the Pride” event Thursday.

The only other Arkansas football player ranked among the top 10 players at his position was Hunter Henry, who’s tied for the ninth-best tight end despite his rating dropping by three since last summer. According to Madden, his best attributes are his catch rating and toughness rating, each of which got a 93 rating. In his first season with the Patriots, Henry caught 50 passes for 603 yards and a career-high nine touchdowns, evolving into rookie quarterback Mac Jones’ favorite targets. He was especially good in the red zone, where he earned a 90.2 grade from Pro Football Focus — the best mark among all NFL tight ends.

A former seventh-round pick, Kamren Curl burst onto the scene as a rookie in 2020, landing on PFF’s All-Rookie Team, and became a full-time starter this past season. He racked up 99 tackles and broke up five passes in his second year in the NFL and seems to be poised to become a household name in 2022. Curl’s overall rating moved up by three, continuing to increase from his original 63 rating as a rookie. According to Madden, his best attributes are stamina (91 rating) and acceleration (90 rating).

After a solid first two seasons in the NFL, Dre Greenlaw missed most of last year with a groin injury suffered while returning an interception for a touchdown in Week 1. He managed to return late in the season and played in the playoffs, but got hurt again in the NFC Championship Game. When healthy, Greenlaw has proven to be a more-than-capable linebacker in the NFL. His best attribute, according to Madden, is acceleration (87) and his overall rating stayed at 78, despite missing most of the season.

Highlighted by an 88 rating in tackling and impact blocking, Deatrich Wise Jr. has been a good situational pass rusher for the Patriots during his five years in the NFL. He’s coming off a season in which had made 41 tackles, including three sacks, and his Madden rating as moved up by two. Much like Ragnow, Wise is also making an impact off the field by backing “Bridge 2 Trade,” a program run by the Boys & Girls Clubs of Boston that exposes youth to alternative career paths in construction and other trades in a six-week course.

Part of a loaded rookie class that features 16 players with a debut Madden rating of 70 or higher, Treylon Burks is tied for seventh among first-year wide receivers with a 73 rating. Although some Titans fans are concerned about his conditioning and asthma, Burks has all the tools to be a great NFL player, including acceleration that earned a 91 rating from Madden, plus speed and agility that earned an 89 rating.

The last former Arkansas football player with a 70-plus rating from Madden is Armon Watts, who has exactly a 70 rating — up three from last year. After starting only one game his first two years in the league, Watts saw his role expand last year, as he made nine starts and notched five sacks to go along with 46 total tackles. His best attribute, according to Madden, is his strength and toughness, both of which earned an 85 rating.

Although he appeared in just seven games last year, McTelvin Agim notched 1.5 sacks — the first of his young career — and three quarterback hits. He’s played just 231 career defensive snaps over the last two years, showing flashes of being a solid pass rusher while struggling against the run.

No former Arkansas football player saw a bigger year-over-year jump in his Madden rating than Jerry Jacobs, who went from an undrafted free agent to NFL starter as a rookie, resulting in his rating jumping up by eight. Unfortunately, his season was cut short by an ACL injury, but not before he started nine games and broke up seven passes with 34 tackles in 13 total appearances.

After spending all of last season on the practice squads of the Cardinals and Jaguars, Jeremiah Ledbetter will try to find his way back onto an NFL field this season in Jacksonville. He appeared in 20 games between 2017-20, with most of them (16) coming as a rookie with the Lions.

Beginning his career at FCS Illinois State, John Ridgeway transferred to Arkansas last offseason and — after an appendectomy kept him off the field in the opener — he quickly established himself as a starter. He needed just one season with the Razorbacks to become a draft pick, as the Cowboys took him in the fifth round of this year’s NFL Draft.

Known more as a blocking tight end in the NFL, Jeremy Sprinkle caught just three passes for 31 yards in his first season with the Cowboys. Despite not having a lot of stats to show for it, he did appear in all 17 games, start four and play 184 offensive snaps while also having a major role on special teams. Sprinkle spent his first four NFL seasons in Washington.

As a rookie with the Jets, Jonathan Marshall appeared in four games and made two tackles while playing 76 defensive snaps. He was a sixth-round pick coming out of Arkansas.

Montaric Brown was a four-star safety coming out of Ashdown and eventually moved to cornerback at Arkansas. His best season came as a fifth-year senior, when he led the team with five interceptions. That helped him become a seventh-round pick in this year’s NFL Draft.

Now entering his fourth season at Tennessee, Cody Hollister has seven career receptions for 58 yards. A good chunk of his five-year NFL career has been spent on practice squads.

Since being selected in the fifth round of the 2016 NFL Draft, Jonathan Williams has bounced around to seven different NFL teams. He most recently joined the Commanders off of the Giants’ practice squad and actually scored a touchdown in Week 14 last year.

Mike Woods caught 83 passes for 1,248 yards and 10 touchdowns in three seasons with the Razorbacks before a surprising decision to enter the transfer portal. He ended his career at Oklahoma, where he made 35 receptions for 400 yards and two scores before getting drafted in the sixth round.

Originally drafted by the Patriots in 2019, Hjalte Froholdt joined the Browns last season and appeared in six games. However, all of his playing time came on special teams.

After not getting consistent playing time at Arkansas, Randy Ramsey signed with the Packers as an undrafted free agent in 2019. He spent a year on the practice squad and then made the 53-man roster in 2020, serving primarily as a special teams ace. He missed all of last season with a significant ankle injury.

He’s still listed as a quarterback, but Feleipe Franks has added some tight end and special teams duties to his repertoire in Atlanta. He’s expected to continue that hybrid role in 2022.

A career backup in the NFL, Brandon Allen actually started a game in place of Joe Burrow last season. For the second time in his career, he was part of the organization that lost the Super Bowl.

Although he’s appeared in only 10 career games, playing just 13 offensive snaps and 53 special teams snaps, Dan Skipper is still in the NFL with the Lions. He appeared in just one game last year and all of his reps came on special teams.