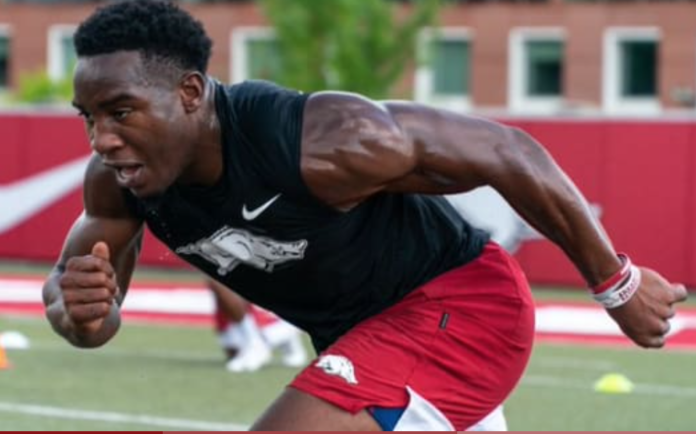 In winter 2020, Jerry Jacobs transferred into the Arkansas football program in large part because he wanted a bigger platform to showcase his skills as a potential NFL defensive back one day.

The former Arkansas State cornerback saw a secondary that needed his help and knew he would be a good fit on an up and upcoming team.

It started off well enough, with Jacobs learning a lot under his new defensive coordinator, Barry Odom.

“Barry Odom is a great guy. He took time to recruit me and gave me a shot,” Jacobs told InsidetheIggles.com.

“In terms of the scheme, we were running a lot of zone coverage which was great but I also learned a lot that I need to work on. If I’m playing bail technique, I need to take some time and not get out of it too quickly. I can take a lot of things that he taught with me to the next level.”

“His film study process, game planning, and scheme were unbelievable. He was one of the best. He would make it look like he was on the offense when game planning.”

All that teaching paid off early on.

Jacobs played the fourth-most snaps on the team and started the first three games of the 2020 Arkansas football season — including the program’s breakthrough win against Mississippi State. However, his suffered an undisclosed upper-body injury and ended up having to sit out the team’s fourth and fifth games. In that time, underclassmen like Hudson Clark started shining in his stead.

Over the course of October, Jacobs went through some undisclosed personal issues.

“Just went through stuff,” Jacobs said after Arkansas football’s recent Pro Day. “My mind wasn’t there. I was losing it.”

In hindsight, “it” appears to be common sense.

Despite the team’s need for Jacobs at a relatively thin position (especially after Clark’s emergence turned out to be temporary), and despite Jacobs need to provide plenty of tape to NFL scouts after suffering injuries earlier in his career, the five-foot-eleven, 203-pound cornerback chose to quit the team.

At the time, it was phrased as an “opt-out” but in hindsight it had nothing to do with COVID-19 or health precautions.

“I don’t want to say no COVID or nothing,” he said.

“My health was good. My mind and what I was eating me up on the inside. Nobody took my position, my health, none of that. It was me… I wasn’t there all the way.”

Pittman shared a lot of reasons why Jacobs should have stayed — such as his ability to make a big difference in what would certainly be close games against the likes of LSU and Missouri — but in the end Jacobs didn’t heed the advice.

“I probably wasn’t just hearing it at the moment,” he said.

Jacobs left campus right after the announcement and by the end of November he was living in Miami, preparing for the 2021 NFL Draft. From afar, he had to watch his former backfield teammates get scorched against Missouri — a game he very well could have helped turn for Arkansas’ favor. He also might have helped the Hogs fend off LSU in November.

If Jacobs could do it all over again, he would not have quit on the Arkansas football program.

At another point in the interview, he added: “100 percent sure I regret it. If I can there again and change my life, change that decision, that would be one that I did.”

Jerry Jacobs and the 2021 NFL Draft

With the could have beens, should have beens behind him, Jacobs is now preparing for a 2021 NFL Draft in April. He knows potential employers will have plenty of questions for him.

Quitting at Arkansas “hurt me a little bit, but I still think I’ll still be good.”

Here are his measurements, per Pig Trail Nation’s Otis Kirk:

As far as where he projects to be picked, Jacobs appears destined for the late rounds. NBC, for instance, has him going in the 6th or 7th round primarily because of the below weaknesses that NFLDraftBuzz.com mentions:

On the other hand…

Most of the evidence here, including Jacobs’ own retrospection, points to him making a boneheaded mistake by quitting the Hogs not even midway through the season.

However, it’s important to remember that he was going through personal “stuff” that he didn’t care to detail in public.

And to know that he hasn’t lived an easy life by any stretch of the imagination. Here’s a glimpse into his background, via InsidetheIggles.com:

“I had a lot of adversity in my life.”

“I lost my mom when I was nine-years-old. My mom was like my backbone. My dad was never in my life. She had five kids to take care of on her own and I was the youngest. I lost her after a football game.”

“I remember to this day she was running with me on the sideline and I went to go spend the night at my coach’s house. He woke me up early the next day to take me home. Usually, he would take us home late so I knew something was going on. When I got home and found out the news it just broke me down. I knew she wouldn’t want to see me like that so I just kept my head up.”

“My sister, Kimberly Jacobs, is my backbone. She raised us after that. She was a senior at UGA when my mom passed. She really cared for us and a lot of sisters probably wouldn’t have done the same if they were in her shoes.”

“It was tough but it’s a blessing to be where I am today. She made me the man who I am today. I love her. She made a way. I do this for my family.”

So it’s not like Jacobs had a father or mother to bounce his personal issues off when times get tough. We would like to think his Razorback coaches could have been there for him, but they only have so much time and bandwidth.

Plus, they wouldn’t have known as well with all the COVID-19 restrictions in 2020.

Yes, he made a mistake, but he has owned up to it without shirking any responsibility.

Hopefully, Jerry Jacobs has learned a lot from his ill-conceived decision and will never forget that lesson no matter where life takes him in the future.

The below published in January, 2020:

For the most part, recent relations between the two biggest programs in the state of Arkansas have taken a kinder, gentler turn.

Then there was the heartbreaking story of Red Wolves head coach Blake Anderson’s wife. Early last season, Wendy Anderson died of breast cancer after years of fighting. There was a huge outpouring of condolences and support for Anderson and the Red Wolves from far and wide, including a significant amount of social media love from Razorback Nation.

In this context, you’d be forgiven if you thought there wasn’t a deep, burning hatred for all things Hogs among some Red Wolves fanatics.

That everlasting disdain recently rose to the surface when Jerry Jacobs, the Red Wolves’ best cornerback, announced he’s transferring to the Razorbacks.

This is a big loss for Arkansas State. Sure, plenty of A-State fans understand why Jacobs transferred. They hold no ill will. But a few Red Wolf supporters held nothing back after hearing the news.

Here are some examples of what they vented on a 247 Sports forum:

— “Honestly hope he spends the next 2 years riding the bench. Good riddance.”- RedWolfRunning

— “I can’t root for anyone who plays ball there, loved him here and was a great player in my opinion. I hope no injury comes to him but I won’t root for a damn thing he does there.” – RedWolfNavy

— “Good riddance. Literally could have transferred anywhere else and I would have rooted for him”. –leftywithheat

You get the idea.

There will always be a vocal group of A-State supporters who want to shut their eyes and close their ears whenever the Hogs are mentioned — especially in a positive light.

Consider all the horrified looks former Arkansas State quarterback Fredit Knighten used to get when he cheered on the Hogs — and his friend Hunter Henry — among A-State teammates.

What’s unusual here is that the traditional Arkansas / Arkansas State power dynamic has been flipped. Usually, players transfer away from the Razorbacks to the lower Sun Belt schools. Naturally, the destination is sometimes Arkansas State.

Very rarely do players go the opposite direction, from Jonesboro to Fayetteville. In fact, it apparently has happened only once before in the modern era.

Wilbourn hardly made a splash for the Razorbacks. Jerry Jacobs, however, projects to be a major contributor.

Jacobs played just 4 games in 2019. He suffered a torn ACL in the 2nd quarter of a Red Wolves loss against Georgia. In four games, he recorded 21 tackles, 1 TFL, & 2 pass breakups and was having one of the best games of his life at Georgia when the injury happened in the second half.

In 2019, Jerry Jacobs posted a 80.6 overall PFF [Pro Football Focus] grade and an outstanding 89.7 in coverage, HawgBeat’s Nikki Chavanelle wrote. “Before tearing his ACL, Jacobs posted a 69.6 in 22 snaps against Georgia, which is above Arkansas’s average coverage grades from 2019.”

It’s clear that the Razorbacks have gotten a quality cornerback in Jacobs, a potential starter in 2020. It helps that Jacobs’ acclimation to the program will go more smoothly because he already knows Rion Rhoades, the Hogs’ new linebacker coach. Rhoades coached Jacobs at his previous stop, Hutchinson Community College, in Kansas.

With Jacobs’ arrival, the Razorback cornerbacks should have quality depth that the program hasn’t seen for many years. Here’s a breakdown, per HawgBeat.com:

Under defensive coordinator Barry Odom, Arkansas’ defense is likely still three years away from developing into an elite unit if all things go as planned. But the addition of players like Jacobs shows momentum is turning in favor of the Hogs after years of ineptitude.

A vocal minority of Red Wolves fans will hate to see it. Especially guys like “RedWolfRon”:

No matter how Arkansas performs, or how open its athletic director is to playing the Red Wolves, some A-State fans will always find something to complain about when it comes to “big brother.”

That’s just something Hog fans have learned to endure, when they’re aware outspoken Red Wolves supporters exist at all.