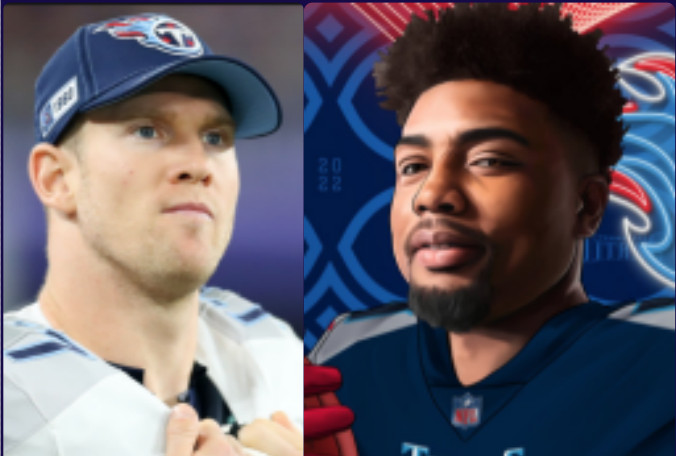 It would be hard for Treylon Burks and his team not to be happy following the first round of the NFL Draft on Thursday night. The Tennessee Titans traded 24-year-old receiver A.J. Brown to the Philadelphia Eagles and then selected the former University of Arkansas star and Warren native with the 18th pick. That made Burks the highest-drafted Hog since Darren McFaddden went fourth  in the first round of the 2008 NFL Draft to the then-Oakland Raiders.

Getting selected so high by a division champion and playoff team that pulled some strings to get you and possibly make you the featured receiver makes for a pretty good situation, right?

Well, let’s just say it’s a good thing Philadelphia didn’t just pick Burks outright because they don’t appear to contenders anytime soon even in the pathetic NFC East. However, there’s a real chance if Burks was still on the board at No. 22 (which he probably would have been if he hadn’t been picked at 18) Green Bay would have picked him. That’s even more certain after today’s reports that Burks was one of the favorites in this year’s draft class of receivers for legendary Packers quarterback Rodgers.

Green Bay’s receiver room is currently barren. If the season started today, even Rodgers may not be able to engineer a deep playoff run with this group. After star Davante Adams signed with the Raiders and Marquez Valdez-Scantling with the Kansas City Chiefs, that left Allen Lazard, who has shown flashes of brilliance, and the aging Randall Cobb, a Rodgers favorite, remaining. The Packers desperately need a receiver. They knew Burks was the perfect pick even though they haven’t selected a receiver in the first round since taking Javon Walker in 2002.

Sliding four picks later would have meant less money for Burks, but it also would have led to catching passes from a future Hall of Famer and being in Super Bowl contention immediately. The are major pluses. It would have been an extremely good situation for both parties. Still, that is the unpredictability of the NFL Draft. Green Bay was so soured on what was left in the receiver pool, it picked Georgia defensive players Quay Walker, a linebacker at No. 22, and defensive lineman Devonte Wyatt at No. 28.

For the Titans, Burks will be expected to carry the load early, which he knows he can do after dominating the SEC without a lot of help from other wideouts at Arkansas.

The problem for Titans’ brass was Brown’s rookie deal was up, and he was demanding more money than the club was willing to pay. He was scheduled to make just under $4 million in his final year in 2022. Brown and the Eagles have already agreed on a $100 million contract that includes $57 million guaranteed.

So, unload that large salary of a 24-year-old player to acquire a slightly younger one that is probably as talented, if not more so, and take less of a hit financially. It’s a smart move on the Tennessee Titans’ part, and it’s not a bad deal for Burks either.

Treylon Burks’ Fit with the Titans

Five receivers were picked ahead of Burks, including four in the Top 12, and they could make substantially more than the former Hog, but none of them are in a better position to win early. And sometimes players picked to losing teams never reach their potential. That’s what happened to McFadden. He was highly drafted but into a God-awful situation. Burks can do what Brown did and make an immediate impact and enjoy team success, and then ink a huge deal – with the Titans or another team.

If Burks can fill in for Brown and former Alabama star running back Derrick Henry can bounce back from a foot injury that kept him out a good chunk of last season, the Titans can win a third-straight AFC South title. Mike Vrabel, the former Patriots linebacker, has proven to be one of the bright, young stars among the NFL coaching ranks.

The question is if Tennessee can win a Super Bowl during Burks’ tenure. Almost every Super Bowl Champion has a great QB. The Titans do not, and that is one of the reasons they couldn’t get past Kansas City in the 2019 AFC Championship game after building a lead. The guy on the other sideline, Patrick Mahomes, proved why he is one of the best QBs in the NFL by pulling out that win and beating the San Francisco 49ers in the Super Bowl. Tennessee had beaten KC in November in Nashville but couldn’t pull off the sweep.

Issues with Ryan Tannehill and Titans

Last season the Titans were victimized by another young quarterback, Joe Burrow, in a 16-10 playoff loss to Cincinnati at Nashville. The Bengals, of course, advanced to the Super Bowl before losing to the Los Angeles Rams.

The Titans’ 33-year-old quarterback Ryan Tannehill and his 14 interceptions a year ago are probably the only bad part of this deal for Burks. Especially considering Tannehill had still not reached out to his future No. 1 receiver almost a full day after the draft.

Three of five NFL Draft reporters for major national media outlets gave the Titans a “C” or “C+” for choosing Burks, primarily because of the optics involving the AJ Brown trade. “The Titans basically dealt Brown just to replace him with Burks and add a late third-round pick,” wrote The Athletic’s Sheil Kapadia. “At best, the franchise is treading water.”

Given the way the Titans ended the 2021 season and Ryan Tannehill’s lack of participation in voluntary workouts this spring, it’s Tannehill who actually deserves all these “C’s.”

For Burks, playing with a star quarterback for a storied franchise would have been better, but there were teams drafting last night in the upper picks that are a lot less competitive than Tennessee. Burks will take it, and individually he’ll flourish. He’s a good, humble kid that will work hard to win. Even if Tennessee doesn’t take the next step, he will enjoy a great NFL career and have a chance to prove how good he is as a rookie.