Search
Home Arkansas Football Razorback News Whether Jadon Haselwood Wants It Or Not, There Is Big-Time Pressure On... 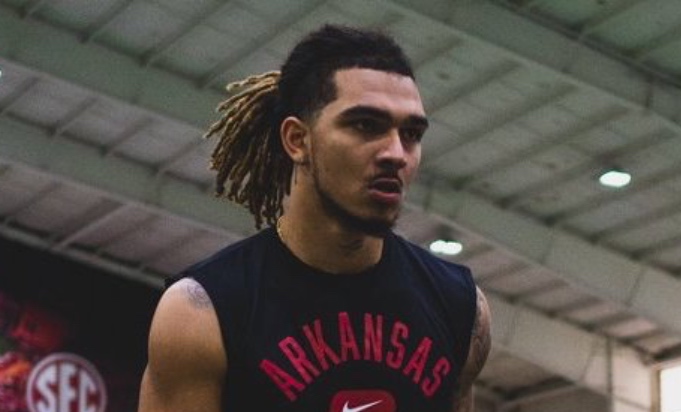 One of the biggest question marks surrounding the Arkansas football team entering the 2022 season is how Sam Pittman and company will replace one of their biggest offensive weapons from last year.

With Treylon Burks off to the NFL as a first-round pick, the Razorbacks have a major hole to fill and, despite a seemingly deep and talented wide receiver room, to clear answer to fill it.

Rather that put that kind of pressure on one player, the third-year Arkansas coach told reporters at SEC Media Days on Wednesday that Burks’ production — that of an all-time UA great — would have to be spread out amongst several players.

“I don’t know you replace a guy (like Burks) one for one,” Pittman said. “I don’t think you can there. We’re going to have to do it by committee.”

The Razorbacks have already gotten a taste of life after Burks, as he opted out of the Outback Bowl, and it didn’t exactly go very well. Quarterback KJ Jefferson threw for just 98 yards and only 17 of them — on five receptions — were to wide receivers still on the team, as starters Tyson Morris and De’Vion Warren were super seniors and have also moved on.

Of course, Arkansas ran for 353 yards, led by Jefferson’s 110-yard performance, so throwing wasn’t a necessity, but it still caught the coaches’ attention.

“That put up more of a red flag,” Pittman said. “Now, in the second half…we decided we could run the football and we did. But it was scary early because we weren’t getting open.”

Who Arkansas Football Will Turn to at Receiver

To help fix that issue, the Razorbacks nabbed a pair of receivers from the portal. Former five-star recruit Jadon Haselwood transferred in from Oklahoma in time for spring ball and then they also landed Matt Landers, who began his career at Georgia before playing at Toledo last year.

Pittman said he had confidence that both would contribute this season, plus he believes Ketron Jackson Jr. and Warren Thompson are ready to go and that they need to step up, as well. He also mentioned Bryce Stephens and Jaedon Wilson as second-year guys in the top six.

“I’m not saying one of those guys can’t have a breakout season,” Pittman said. “I’m not saying that, but I think to replace a Burks, you’ve got to do it with more than one guy.”

The Razorbacks also added a trio of four-star recruits in their latest signing class. Quincey McAdoo from Clarendon went through spring ball, while Isaiah Sategna from Fayetteville and Sam Mbake from Georgia arrived this summer.

There are some high expectations for them, but they’re also true freshmen and Pittman said it’s “still yet to be determined whether they can help us or not.”

Whether it’s fair or not, most of the pressure to replace Burks falls on the shoulders of Haselwood.

Arkansas football doesn’t exactly have an extensive history of landing five-star recruits and those it has have ranged from legendary (Darren McFadden) to total busts (Darius Winston).

It’s a different position, but the Razorbacks probably hope Haselwood’s time in Fayetteville as a heralded transfer more closely resembles that of Ryan Mallett than Ricky Town.

That is asking a lot of a guy who comes to Arkansas with 62 receptions for 736 yards and seven touchdowns over 28 games with the Sooners — especially with Burks having better numbers (66 receptions, 1,104 yards, 11 touchdowns) in just 12 games last year alone.

However, he was the No. 1 wide receiver and No. 4 overall recruit in the 2019 class for a reason. Even if he didn’t fully showcase it with the Sooners, Haselwood certainly has the talent and potential to be great.

Playing alongside the likes of CeeDee Lamb and Charleston Rambo as a freshman, battling injuries as a sophomore, and then quarterback instability as a junior likely contributed to his inconsistent play at Oklahoma. Perhaps a change of scenery, a new offensive system and reuniting with his former high school coach, Jimmy Smith, will be just what he needs to finally put it all together.

That’s what Arkansas is counting on, as Pittman has previously said he expects Haselwood to be a one-year player for the Razorbacks even though he has two years of eligibility remaining — implying he’ll be good enough to get selected in the 2023 NFL Draft.

It is interesting, though, that went asked multiple times at SEC Media Days about replacing Burks, Pittman gave the same “by committee” answer instead of singling out Haselwood.

Malik Hornsby the Wildcard at WR

The one player who hasn’t been mentioned yet at wide receiver is Malik Hornsby, the backup quarterback who also got reps at receiver in spring ball.

It was a move the coaches talked to Hornsby about when he opted to pull his name out of the portal and remain at Arkansas, but it wasn’t really possible until the staff got a look at the rest of the quarterback depth chart.

Redshirt freshman Lucas Coley transferred out midway through the spring and walk-on Kade Renfro — who transferred in from Ole Miss last offseason — tore his ACL in bowl practices, so it was pretty thin at the position. However, the Razorbacks did land another walk-on transfer in Cade Fortin.

The former North Carolina and South Florida quarterback emerged as a legitimate backup option this spring, which eventually allowed Arkansas to experiment with Hornsby at wide receiver.

“He’s fast, he has natural ball skills,” Pittman said. “We need to get him on the field. If he doesn’t beat KJ out in fall camp, he needs to be on the field. He’s fast, up to 190 pounds now. He can withstand the hits, physicality.”

Most of Hornsby’s reps at wide receiver involved him motioning across the formation or into the backfield, giving him the option to take a handoff, pitch or even direct snap. As the spring progressed, though, he did run a few actual routes and made a couple of impressive catches on go routes against one-on-one coverage.

Exactly how much the Razorbacks expand the package for him as a receiver remains to be seen, but Hornsby is definitely an intriguing option to follow in their quest to replace Burks.

Including Hornsby, the Razorbacks have nine wide receivers who were rated as four-star recruits or better by at least one major recruiting service.

The room as a whole has combined for just 433 yards and three touchdowns on 30 catches in an Arkansas uniform, but the talent is there to give Jefferson the tools he needs to have another big year and potentially work his way into the Heisman conversation.

Jefferson and the Razorbacks will have 25 practices during fall camp to iron things out before welcoming Cincinnati, fresh off an appearance in the College Football Playoff, to Reynolds Razorback Stadium for what is widely expected to be a top-25 showdown.