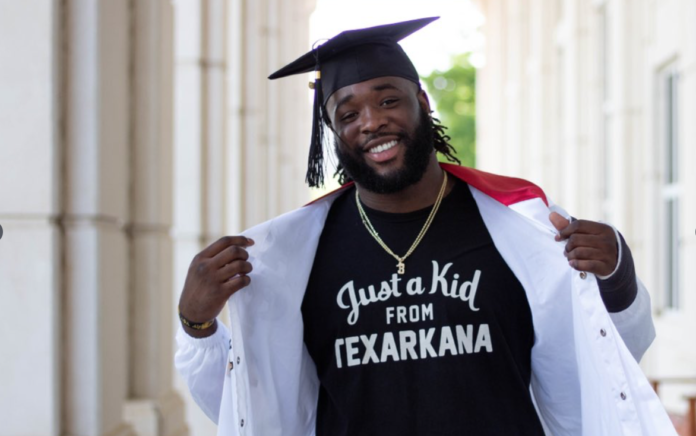 It took a little while for McTelvin Agim to process the fact that John Elway was actually calling him.

“It’s like, this dude is on the phone right now. Like John Elway, THE John Elway,” Agim recalled to the Arkansas Democrat-Gazette. “The comeback king. Mr. Clutch is on your phone right now. I’ve seen him on so many like NFL 100s or NFL top 10s. It was crazy. It was a surreal feeling, honestly.”

Elway called to tell Agim he had just been drafted in the third round of the 2020 NFL Draft as the 95th pick overall. Not only was the man nicknamed “Sosa” heading west, but he was also the first defensive Razorback player picked in the third round or higher in eight years. That’s higher than either Trey Flowers or Deatrich Wise, both former Razorbacks who have made a splash in the NFL.

Like Flowers and Wise, Agim played all four seasons. He finished his career just out of the all-time Razorbacks Top 10 in sacks and tackles for loss.

All that slipped his mind as he heard Elway’s voice and began to feel tears flow downward, however.

7 years ago around this time i was sitting in a juvenile detention center not knowing how life would end up. now i see my name being called in the draft. God is great and his timing is perfect ?. #BroncosCountry pic.twitter.com/vDlmzGo6wC

Just seven years ago, the chances of Agim reaching this point seemed slim.

Before attending Hope High School, twenty-two-year old McTelvin Agim spent much of his youth in the Texarkana area, on the Texas side.

Agim’s guiding light in childhood was his grandmother Charlie McGraw. Though blinded by diabetes, she made sure Agim and his two sisters stayed in line, staying out of trouble and making good grades, while their mother was away at work in Hope.

McGraw’s home at 1320 Caldwell Street, where they all lived, was a humble home in a poor neighborhood. But the memories he made there have had a profound effect on his life.

In fact, years later, Agim took coach Bret Bielema there during a recruiting trip. He wanted Bielema and other former Razorback coaches to know about his past and where he would always — no matter how many millions he’d make — represent.

“It was letting them see first-hand what I came up in and see the situation,” Agim said in 2015. “That’s my motivation. Like you don’t have to worry about me. I’m going to be on it.”

McGraw died when Sosa was 11 years old. He struggled to adjust.

It didn’t help that money was tight. Agim started hanging out more with friends, not a gang, but guys who got into the kind of petty crime trouble that could brew into something worse.

But “he didn’t start stealing from the Dollar General store for fun or to impress friends,” former sportswriter Kurt Voigt wrote in 2017. “He says he did so to eat in the evenings after his school lunch couldn’t quell the hunger anymore.”

“‘I feel bad about it, but it was either steal or starve,'” Agim added.

One thing led to another, and in eighth grade Agim found himself at a life crossroads while sitting in a juvenile jail cell in Texarkana. He’d just been locked up for trying to steal a car and then running away from the police.

He thought about what he wanted to do in the future — perhaps even including dreams of one day being a professional athlete.

A groundbreaking book about race and sports in Arkansas

When he got out of the detention center, Agim began to lead a life more in line with what his grandmother would have been proud of. He eventually developed into the highest-rated defensive lineman recruit Arkansas has signed in the SEC era.

Now, he’s looking forward to taking to Denver all the lessons he learned from his grandmother, from his youth in southwest Arkansas and from his four years in Fayetteville.

“The thing that I feel like I have to improve on the most is just being more consistent, because I’ve been able to do everything, but I need to be able to make sure I can do it on a consistent basis,” he told DenverBroncos.com.

“Being able to learn from Jurrell Casey, you have other guys, just all of those guys, All-Pro legends, future Hall of Famers, I’m able to sit there and learn under them,” he added. “It’s going to be a blessing.

“Just being able to learn under all of those All-Pro, future Hall of Famers, I’m just going to try to soak it in and be appreciative of the opportunity.”

i come from the jungle we be happy to see 18…from juve to this, life a movie. pic.twitter.com/no56WlGkD8

Agim was one of seven Razorbacks to join the NFL over the weekend. Here’s a look at the rest: