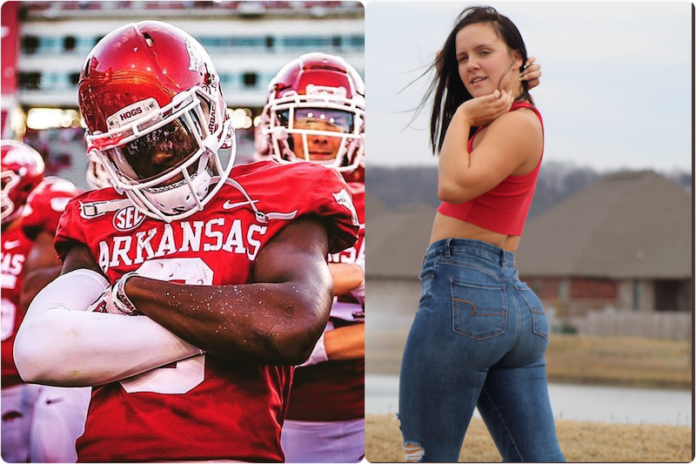 These last few months haven’t exactly been crackling with gridiron action for Razorback football players. The doldrums of winter didn’t pivot into the usual thrill of head-cracking spring practice.

It has, for one, given Arkansas’ top receiver Mike Woods a chance to hone his highly public photography skills. Woods, so far, has taken a few de rigueur shots of the Ozark hills but he’s mainly got an artistic eye for two subjects: his beloved slobbery bulldogs, Draco and Maverick, and hot college co-eds.

You can get a glimpse into the budding auteur’s work by looking at this montage of shots of a girl in what appears to be a viaduct:

Some shots from today! ? pic.twitter.com/LbrErXFdik

And here is the 6-1, 197 pound former three-star recruit from Magnolia, Texas at work:

Really in my bag… pic.twitter.com/BaY5WJaHMs

Woods will occasionally snaps shots of his girls in front of crosses — as well as dogs and girls, as you can see in this shot from cheerier, pre-COVID times:

As well as portrait shots of girls in front of massive crosses, massive trees or massive rocks:

Mike Woods, who led Arkansas with 33 catches and four touchdowns in 2019, also carved out some time to check out the first 18 picks or so of the NFL Draft on Thursday night.

Growing up northwest in Magnolia, Texas, northwest of Houston, Woods has long been a Texans fan. But on Thursday night, after seeing the Dallas Cowboys pick All-American wideout CeeDee Lamb with the 17th pick, he became a Cowboys fan too:

No doubt, Woods is excited about the filthy rich offense that Dallas owner Jerry Jones has put together for the Cowboys while watching the draft from his $250 million super-yacht.

Lamb, perhaps the top playmaker in the draft and one of the top two wide receivers, will help form a lethal offense alongside current Cowboy receivers Amari Cooper and Michael Gallup.

“Not only is Lamb joining Cooper and Gallup, but the Cowboys offense also features two-time NFL rushing champ Ezekiel Elliott, a dynamic talent in Tony Pollard, the athletic tight end Blake Jarwin (who forced Jason Witten out of the door in 2020) and is piloted by two-time Pro Bowl quarterback Dak Prescott — coming off of a career-best season where he nearly set a franchise record with 4,902 passing yards to go along with 30 touchdowns to only 11 interceptions.”

Ceedee Lamb, whom analyst Pete Thamel said most closely Larry Fitzgerald at this point in this career, hasn’t even hit the field yet for the Cowboys. But he’s already delivering big when it comes to entertainment value. He’s produced the most hilarious moment of the 2020 NFL Draft so far:

Excellent recovery by CeeDee Lamb. This is a Pro Bowl move.

Not long after watching the Cowboys’ pick, Mike Woods decided he’d had enough of the draft for a while. He was ready for some game time of his own:

I’ve seen what I needed to see I’m satisfied now, @COD_WARZONE me please

Who is Mike Woods?

He’s part of a three-headed monster at wide receiver for the Razorbacks including sophomores Treylon Burks and Trey Knox. They will aim to be as devastating for the Razorbacks’ 2020 offense as the Cowboys’ new Big Three will most certainly be for theirs’.

Here are some highlights:

Started all 12 games of the 2019 season at wide receiver

*Led the team in receptions with 33 and touchdowns with four

*Caught a touchdown pass from four different quarterbacks in 2019