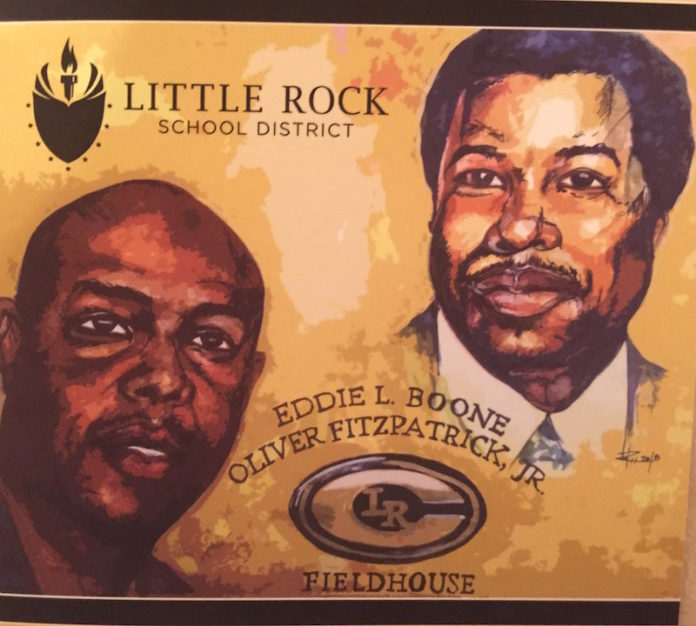 In November 2018, Little Rock Central High School’s field house was dedicated to coaches Eddie Boone and Oliver Fitzpatrick. Boone was a pioneering coach in the 1960s and early 1970s who won multiple state championships after breaking through as the first black coach in the Arkansas Activities Association.

Fitzpatrick, meanwhile, led Central to its greatest basketball glory in the 1998-99 season (coincidentally my senior year of high school). Led by Joe Johnson, Jarrett Hart, Mark Green and Alex Finger (who would all start at the Division I level), that team ran roughshod over competition and beat North Little Rock by more than 40 points in the state finals. It ranks with the likes of ’80 West Memphis (part of a 60-0 streak) and ’92 Parkview as the greatest prep team in state history.

Some of the excerpted factoids below are from the official program of Central High gym dedication to Boone and Fitzgerald:

1952-1956: Attended Holman High School in Stuttgart; started as a letterman quarterback each season — threw for 36 touchdowns and ran for five more as a sophomore.

1961: Graduated from Philander Smith College after playing quarterback on the team. His teammate, tailback Elijah Pitts, would go to star for the Green Bay Packers during the first two Super Bowls.

1964-1973: Coached at Eastside Menifee High School in Menifee, AR. By 1965, he had become the first African-American coach in the AAA by field an all-black team against all-white competition in the state playoffs (coming out of Area 9B – now Class A)

1974-1994: Coached Little Rock Central High School. In his first season as head basketball coach, he led Central to a conference, state and overall championship while sustaining only one loss.

Overall, as a Central coach, Boone won 1,207 games and lost 334. That makes him the winningest head basketball coach at the highest classification of the Arkansas Activities Associaton.

1973: Graduated from Central High School in his hometown of Helena, AR.

1977-1979: Played basketball at what was then Garland County Community College while serving as sportswriter for the campus newspaper

1979: Enrolled at Henderson State, where he would play as a scholarship basketball player and graduate with honors with a bachelor’s degree in US History and Sociology

To read more about Eddie Boone and other pioneering African-American athletes and coaches from Arkansas, check out my book below. Boone is featured as the Holman High quarterback on the lower left corner.

Preview it by clicking below: