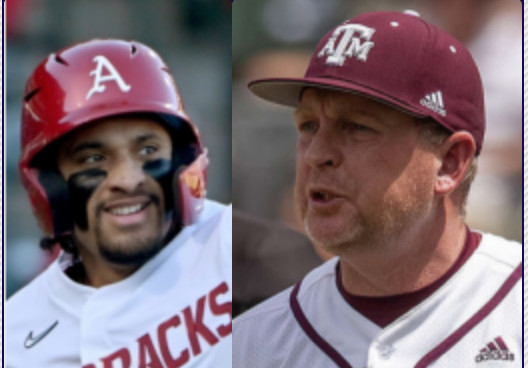 Just how important is RPI in college baseball? As the Arkansas baseball team plays its final weekend of the regular season, the question was never more timely. The #7 Razorbacks (38-14, 18-10) are tied atop the SEC West with smoking-hot #6 Texas A&M (34-16, 18-10). The Hogs, who are 8-7 since sweeping LSU and ASU a month ago, beat Alabama in the first game of the series this weekend while the Aggies beat Ole Miss 10-5 in a series opener that saw Rebels coach Mike Bianco get thrown out for being way too cheeky.

Despite being second in the overall SEC standings since the first conference weekend, the Razorbacks are fighting an uphill battle in terms of rectifying their top 10 ranking with a substandard Ratings Percentage Index or, as it’s more commonly known, RPI rating. The Hogs are currently #27 in the NCAA’s published RPI which puts them behind Tennessee (1), Vanderbilt (3), Auburn (4), Georgia (11), Florida (13) and Texas A&M (17).

This actually reflects a drop from #26, which somehow happened after the Razorbacks’ Game 1 win at Alabama on Thursday night.

The Razorbacks have a better conference record than all of those teams besides the Volunteers and Aggies. The Hogs lost two of three to Vandy, at A&M and at Florida with a series win at Auburn. For reference, Alabama is currently #53 and A&M’s opponent, Ole Miss, is #39.

Arkansas Baseball Has Paid a Price

Arkansas has paid the price with their non-conference schedule which ranks #250 out of 301 D1 teams according to D1baseball.com. Strength of schedule (SOS) accounts for a big chunk of the RPI calculation and deals with opponents’ winning percentage and opponents’ opponents’ winning percentages. For reference, Arkansas was #1 in the rankings and #1 in RPI with the #1 SOS in 2021 but of course ran into a buzzsaw in North Carolina State, losing two one-run games in the super regionals.

As much as everyone likes playing in-state schools, the volume of games against those teams hurt the Razorbacks. Bad. Despite not even losing a game against them. UALR’s RPI at #176 is the highest ranked of those opponents with UCA at #195, ASU at #234 and UAPB at #299. Toss in Grambling at #280 and those games didn’t do Arkansas any good.

One could even argue that facing the substandard pitching of those schools may be the cause of some of the Razorbacks’ offensive issues in league play. It is safe to say that the Hogs didn’t face a single arm that could pitch for a SEC program in any of those games. And, if I recall, Grambling threw one or two guys with fastballs under 80 MPH.

The Arkansas baseball program made its schedule well in advance and early-season games against Southeastern Louisiana (127) Illinois State (179), Omaha (209) and Illinois-Chicago (196) were all thought to be worthwhile as those teams typically compete at the top of their respective leagues. But as 2022 has played out, none of them have had the season they expected.

The same could be said for name-brand schools like Indiana (117), Mississippi State (108) and Missouri State (100), against which the Hogs went 3-2. Each is having a substandard season, especially the defending national champs. They have lost nine SEC games in a row and were annihilated 27-2 at home on Thursday night thanks to Tennessee. From national champs to not even making the SEC tournament is a likely destiny for the Bulldogs. Talk about an “epic fail,” as the kids say.

The Hogs’ midweek loss to Missouri State a couple weeks ago put a real dent in the Hogs late season RPI. That red flag forced Texas A&M to cancel a midweek game against Incarnate Word this week and Ole Miss to dump a game against Arkansas State in Jonesboro.

Wins in those games would have marginally hurt each of those teams in terms of dinging their strength of schedule, which impacts their NCAA tournament slots. Losses would have been irreparably damaging this late in the season. Texas A&M, just like Arkansas, is playing for the SEC West crown, hosting and seeding while Ole Miss is scrambling to get in the tournament after a lackluster first two-thirds of the season. As lame as that is to backpedal out of those games, I can see why those respective schools chose that route.

Ducking opponents and games for self-centered reasons doesn’t make it right and, as Jen Bielema would make sure we all know, karma has a way of integrating itself into these kind of situations. In reference to the Texas A&M baseball cancellation, Kent Smith, while writing for SI.com, stated, “It was a gutless move that shouldn’t have been allowed to happen, and it’s an embarrassing black eye to the university and the conference.”

I am not sure I would call the cancellations a “gutless move,” but they are definitely selfish.

Arkansas State actually had a SEC school coming to play on their campus which would have drawn some fans, given some attention to the program and Ole Miss yanked that rug right out from under them. But I’m not sure how important that is as the Rebels have come to Jonesboro before and the Red Wolves haven’t improved their program much, if any.

It’s intriguing the Aggies and Rebels play each other this weekend with so much on the line for both schools. When and how will cosmic comeuppance rear its ugly head? Karma may not rectify anything this weekend but the baseball gods have a funny way of sorting these kinds of things out. Stand by.

Looking ahead to Arkansas vs Alabama

Would Dave Van Horn do the same? Possibly, but the Hogs don’t have a midweek scheduled so we may never know. I’d like to think he would play the game and get pitchers some work and try one more time to get this lineup clicking before a big conference series at Bama. Still, who’s to say?

Do not be surprised if the SEC West remains unsettled until Saturday when the season wraps up across the league. The Aggies own the tiebreaker over the Hogs due to winning the hotly contested series in College Station earlier this season. If the Hogs can win the West, that would make four in a row for the Razorbacks coupled with an overall SEC title in 2021.

As much stock as the NCAA Selection Committee puts in RPI, it is not the end all, be all. Any team that goes through the gauntlet that is the Southeastern Conference and finishes second overall should be a national seed. Nobody can tell me Oregon State (RPI #2), Virginia Tech (5), Dallas Baptist (10) or Georgia Southern (6) would have the same success if they played in this league.

But there is the eyeball test too and the SEC runner-up should be highly seeded. That includes a national seed with the potential to host a super regional. The only wrinkle in that would be the SEC is considered the second best conference in 2022 RPI wise behind the ACC.

Vying with Texas A&M for a Crown

Arkansas’s weak non-conference schedule doesn’t and shouldn’t matter if they finish as a standalone runner-up to Tennessee. If the Hogs end up tied with Texas A&M, the Aggies will likely secure that national seed and the Hogs would get a top 16 seed, host a regional, and then possibly be put on the road for supers. A series loss to Alabama may slide the Hogs down to a #2 seed and on the road for the remainder of the 2022 season.

All of the above is possible. Fans are waiting to see the Razorbacks play their best baseball, and nobody believes they have actually done that yet. But the clock is ticking.

Still, the Razorbacks’ body of work has put them in an overall enviable position. They are left with a pretty simple charge to resolve all these issues involving RPI, SOS, seeding, hosting and division championships.

Brent Birch was a four year letterman under legendary Coach Norm DeBriyn and including the Razorback’s 1990 Southwest Conference Championship team. Birch was also on the first Razorback team to play in the SEC in 1992. He won the Bill Dickey Award in 1993 that was traditionally awarded to the top senior at the University of Arkansas. Birch still is ranks in the Razorback’s career top 10 for games started (42) and innings pitched (272.2). He currently is the Executive Director of the Little Rock Technology Park.

Make sure to get notified of future articles by Brent Birch here:

“There almost should be an unwritten rule,” the Aransas sportscaster recently said on “Ask Mike.” “And coaches should know that as you approach postseason play, just don’t play midweek games anymore. You play them early in the season because you’re trying to get better and you’re trying to pitch young guys. And we’ve already seen a couple of midweek pitchers now pitching out of the bullpen on the weekend.”

“There’s a reason to play those midweek games early in the year into the middle of the year. But as you get to the end, what’s the point?”

Irwin also had a good time ragging on Aggies and Longhorns alike:

“I do think it’s hilarious that the bashing of Texas A&M baseball is mostly coming from Longhorn morons. And I say morons because they are morons. I mean, A&M beat them in Austin. You’re going to sit there and throw shade on them for not doing this and act like they’re scared to play Incarnate Word, when they whip your butt in your place? Shut up. Just shut up, Longhorn fans. And so, it is funny when Aggies and Longhorns argue with each other.”