Search
Home Arkansas Football Around the SEC After Admitting He Ate Crow, Alabama Writer Poses Sam Pittman as a... 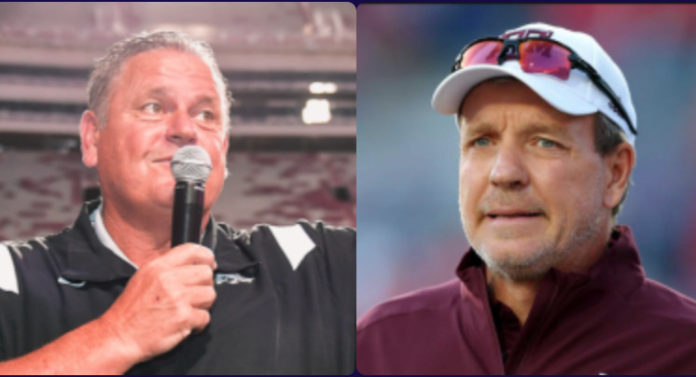 Jimbo Fisher is, by most accounts, a high-quality coach.

The 55-year-old Texas A&M head football coach won a national title at the helm of Florida State in 2013 and has a sparkling 8-2 record in bowl games.

As exceptional as Fisher has been, when it comes to his career arc he’s been pretty typical of the modern big-time college head football coach. Starting as a quarterbacks coach (at Auburn), Fisher worked worked his way up to offensive coordinator duties at Cincinnati, LSU and Florida State before finally landing a head coaching gig with the Seminoles in 2010.

A native of West Virginia, Fisher had no previous ties to Texas A&M when the Aggies hired him in 2017 other than his relationship with former Aggies athletic director Scott Woodward.

Texas A&M simply went out and opened up the coffers to get an already established coach with experience in the SEC. So far, it’s worked for both parties. Fisher has a 10-year contract that will pay him nearly $95 million.

On Saturday, though, Fisher’s No. 7 Aggies will face off at Cowboys Stadium against an Arkansas team led by a man whose career arc has been anything but typical.

In a game that may need a cage airdropped into Jerry’s World given how physical these teams are, Texas A&M is favored over Arkansas by 5.5 points.

The 3-0 Razorbacks, now No. 16 in the nation, are rapidly becoming national media darlings thanks to their tenacious playing style, the fact they embarrassed Texas on national TV and the charisma of head Hog Sam Pittman.

Before taking over as Arkansas’ head man in December 2019, Pittman had no previous head coaching experience at the major college level.

Indeed, he hadn’t even been a coordinator at a major college program. That lack of experience earned Hunter Yurachek, Arkansas’ athletic director, a lot of derision nationwide for making such an unusual hire.

While critics of Sam Pittman’s hire saw a coach who didn’t check the right boxes, Yurachek saw somebody who not only had a deep knowledge of the Arkansas program after growing up an hour away and serving as a Razorbacks assistant coach under Bret Bielema, but also wanted to be the head Hog.

“A lot of times you get in these searches coaches are worried about what they’re going to make, what their buyout is going to be, the terms of their contract, bonuses and things of that nature,” Yurachek told Talty. “Sam just wanted to be the head football coach at the University of Arkansas.”

That authentic desire and passion, so unlike the used refrigerator salesman schtick of predecessor Chad Morris, has bled over into every part of the Arkansas football program and brought the Hogs to the cusp of their first 4-0 start since 2003.

As Talty wrote: “Pittman’s passion for the job, which prompted multiple former players to reach out to Yurachek to advocate for the then-Georgia offensive line coach, was markedly different from what Arkansas experienced under Morris.”

“It didn’t take long for those within the program to realize Morris took the Arkansas job because it was a logical next step from SMU, rather than a genuine desire and understanding of what being the program’s coach meant.”

Pittman’s success has made Talty, like so many other former critics, admit to being wrong.

They now see what Yurachek saw: that Sam Pittman’s qualities as a leader and motivator far and aware trump his lack of traditional bonafides.

“Sam never backed down from the challenge,” Yurachek told AL.com. “He understood that we were in the SEC West, he understood our history of having not won an SEC game in a couple of years, and he believed he was the right man to change the trajectory of our program and change those things that made our football program look like a negative opportunity from the outside.”

Will there be more Sam Pittmans?

Talty now wonders if Yurachek’s hire will prompt a wave of copy cats across the nation during the next few inevitable cycles of December coaching firings and hires.

“Could university leaders place more emphasis on coaches who want the job instead of being willing to accept it?” he asks. “It sounds overly simplistic, but there’s real value in hiring a coach who understands the uniqueness of the individual program and has a strategy to cultivate the desired culture.”

Already, there are a couple of points of comparison.

LSU head Ed Orgeron (also a former Razorback assistant) is a somewhat cllose approximation, given his deep ties to Louisiana and his history as a defensive line coach. However, by the time LSU made him their full-time head coach in 2016, he had already served two head coaching stints at Ole Miss and USC (as an interim).

Talty points out, however, that Orgeron wasn’t their first choice, just as Pittman wasn’t Yurachek’s first choice. That designation belongs to Tom Hermon, who later flamed out at Texas before becoming an analyst with the Chicago Bears.

Like Pittman, he had no experience as a head coach previous to his December 2020 hire, although he had been an assistant head coach and tight ends coach.

Also, like Pittman, Beamer is a great recruiter and “had deep connections to the school and state. He was born in Charleston and later spent four seasons at South Carolina under Steve Spurrier.”

“He fell in love with the place, and that feeling won over former players and key decision-makers when South Carolina looked for a new head coach after firing Will Muschamp.”

Shane Beamer, though, whiffed here. He wasn’t able to hire vastly experienced and proven coordinators at the college level after coming on board. Instead, he hired NFL assistant Marcus Satterfield and Clayton White from Western Kentucky.

That’s left a lot of onlookers underwhelmed by South Carolina, which just got manhandled by Georgia 40-13.

“If you want an example of someone who sold a program that he could bring in coaching talent and then missed badly, see Shane Beamer at South Carolina,” wrote Texas A&M writer Jeff Tarpley.

One coach that Talty failed to mention is Matt Luke, the former Ole Miss offensive lineman and longtime offensive line coach who was Lane Kiffin’s predecessor at Ole Miss. Luke, who had been an offensive coordinator, tracked a lot closer to Pittman and Orgeron in background but did flame out after a couple of seasons.

Kiffin, meanwhile, was every bit the splashy signing yet so far he does look like a home run hire. Indeed, a lot of Razorback fans wanted Lane Kiffin to be Chad Morris’ replacement.

For decades, programs sought hirings in the Jimbo Fisher/Lane Kiffin vein, but Sam Pittman’s success may give them a legitimate alternative.

“The early success Arkansas has had with Pittman should prompt ADs and university presidents to think hard about what they value and what they really want in a football coach,” Talty writes.

While Talty doesn’t explicitly bring up Jimbo Fisher and Lane Kiffin as emblematic of the kind of splashy hirings that attract athletic directors, they represent the kind of “in-the-box” logic that ADs are prone to use during hiring season.

Talty concludes: “Pittman might not have been a universally acclaimed hire like some other coaches at the time, but most importantly, he looks like a smart hire and that’s because of Arkansas’ willingness to think differently.”

College football analyst RJ Young recently broke down the big game between the teams of Sam Pittman and Jimbo Fisher:

“They were getting ran around by a quarterback that I don’t think is as talented or as mature as KJ Jefferson.”

“I believe that if you’re going to have to figure out how to stop the six foot three, 255-pound dude that also throws passes, then you’re going to open the game up in a way that I believe Kendal Briles can take advantage with that veer-and-shoot, use some tempo to go at them.”

“But I think that you, as Arkansas fans, should be very excited to see Barry Odom against that defense because I think they could have played head up against them with Haynes King at quarterback, and I get that everybody’s very high on John Ridgeway” but look out for those linebackers (Grant Morgan, Bumper Pool and Hayden Henry) and secondary.

“I give Arkansas the slight edge in this one.”

Hear from Sam Pittman on his matchup with Texas A&M below:

The latest from Jimbo Fisher