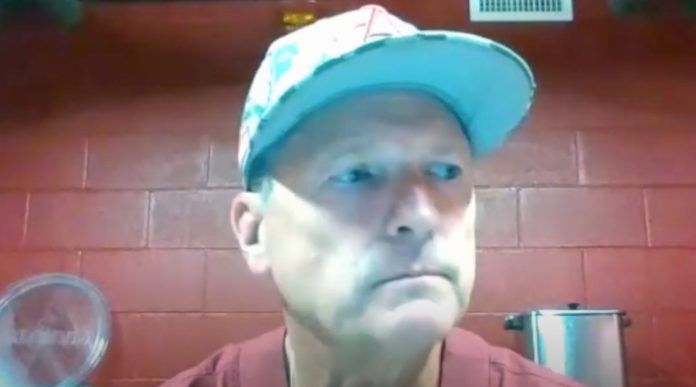 A couple days ago Arkansas baseball coach Dave Van Horn made a point to remark about Arkansas’ season. More specifically, he remarked about how the Razorbacks were in the midst of a season vying for a fourth straight division but were feeling a bit miffed with some of the external chastising. They were tied for first in the SEC West with Texas A&M entering the weekend, after all. Not long before, former pitcher Patrick Wicklander had tweeted the same thing: Arkansas fans are spoiled.

Neither Van Horn nor Wicklander were wrong. But a few days later, after the Diamond Hogs dropped the final regular-season series of the year to one of the worst teams in the league, Van Horn was at a loss for words. The Razorbacks were waylaid by Alabama in the series finale, 18-5, ensuring no fourpeat. Texas A&M had made it moot with a win, too, but Arkansas losing two of three to the Crimson Tide, who finished 11th in the SEC, is quite a sting heading into this week’s SEC Tournament.

“It all started on the mound,” Van Horn said following Saturday’s loss. “That’s what changed everything. It’s a big concern. Disappointed in two out of the three starts this weekend.”

Arkansas’ best attribute is a concern? That means everything that comes next is a concern. The Razorbacks absolutely rely on pitching, leaving no one with any idea what to expect in the SEC Tournament or the NCAA Tournament that follows.

Half Glass Full for Arkansas Baseball

Arkansas finished third in the SEC. Van Horn’s team won 18 league games for the fifth straight season. Two of those seasons resulted in Arkansas finishing the whole of the year in Omaha at the College World Series. Another season, last year, the Diamond Hogs spent nearly the entire year ranked as the No. 1 team in the country before falling in the Super Regionals. This year’s Razorbacks team spent practically the whole season ranked inside the Top 10. They were in the conversation for a potential national seed, as unlikely as it might have been given their lower RPI, entering the final weekend of the regular season. In other words, Arkansas was Arkansas and Van Horn and Wicklander were justified in their frustration with a certain segment of the fan base that thought the Razorbacks simply weren’t good enough.

The other perspective is less glamorous.

Arkansas’ data isn’t that of a team one would figure on being a potential national seed. Of course, that’s out the window, probably, after the weekend’s series loss to Alabama. An unbeaten run through the SEC Tournament culminating with a win over the nation’s No. 1 team, Tennessee, could see the Razorbacks enter the conversation, but even that likely isn’t enough. Third-place-in-the-SEC teams would be borderline in the best of years. This wasn’t the SEC’s best year.

Reality for the Razorbacks

The reality is Arkansas, during SEC play, didn’t exactly set the world on fire. The Diamond Hogs were 11th in the league in batting average (.254), eighth in slugging (.444) and sixth in on-base percentage (.356). Those aren’t numbers generally conducive to a top-three finish in the SEC, though they achieved it, anyway. A big part of that is because they don’t strike out at the plate. Their 251 strikeouts were the second-best mark in the league. That means they’re putting the ball in play, giving them the ability to score even on outs. It isn’t sexy; it isn’t even ideal, but it’s a big part of why Arkansas’ record is better than the batting statistics would suggest at a first glance.

That, plus pitching. The Arkansas baseball staff, namely its bullpen, helped the Razorbacks finish second in the SEC in runs allowed and third in opponent batting average. Even when opponents did hit the ball, it wasn’t hard. The staff finished second in doubles allowed, triples allowed and home runs allowed. If the Razorbacks want to make a run in the postseason, it will almost certainly count on its pitching.

It was the pitching that let them down on Saturday, though. Only two of the eight pitchers who took the mound in the season finale kept the Crimson Tide off the board. Those sorts of results are incredibly rare and almost certainly won’t happen again. They’re an aberration. But with Arkansas’ lineup doing typical Arkansas baseball lineup things (five runs on 11 hits with four walks), better-than-average performances will be required in both the SEC Tournament and the NCAA Tournament that follows, wherever it is.

Arkansas, barring a disaster at the SEC Tourney, stands in good shape to host a Regional in Fayetteville. Entering the weekend, Baseball America had the Razorbacks pegged as the No. 11 seed in the nation, meaning a Fayetteville Regional. The Hogs were 11-4 in conference play at Baum-Walker Stadium during the regular season. The note of conference play is mentioned only because the quality of teams Arkansas will face in the NCAA Tournament are closer to SEC quality, as opposed to say, your Arkansas-Pine Bluffs and Arkansas States of the world. Arkansas’ weak nonconference schedule certainly went a long way in the discrepancy in the Hogs’ poll ranking (top-10) and RPI rating (hovering around 30). Those same fans who were anxious or annoyed a week ago are certainly more so now. A 4-6 finish to the regular season isn’t exactly confidence-inspiring.

Whichever perspective you choose – full or empty – is yours. But don’t be that guy. Don’t become the fan Van Horn and Wicklander alluded to. This is Dave Van Horn after all.

In DVH, we trust.