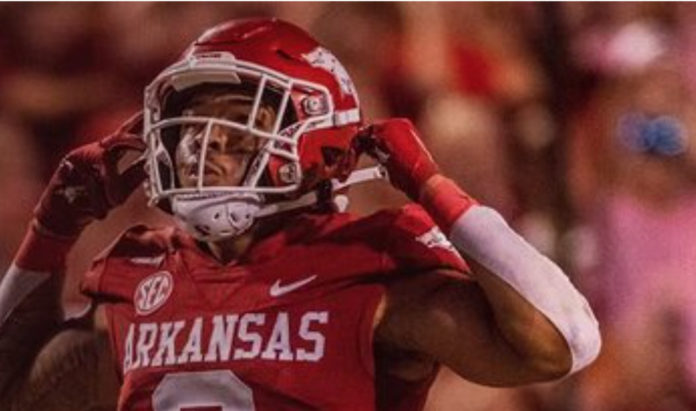 When senior safety Joe Foucha made a slew of exciting plays in the Outback Bowl, Arkansas fans didn’t likely anticipate his big effort would be his last as a Hog.

Foucha’s second half interception and sack helped key the Hogs’ shutout of Penn State in the second half of the 24-10 win. He emerged as a contributor at the end of Chad Morris’ fated run, then really ballhawked for the outmanned 2020 team.

This, we reckon, is the new Wild West of collegiate sports. The transfer portal, coupled with the Name Image Likeness (NIL) tsunami that took over as soon as it became judicially legitimized, altered the landscape greatly.

What does that mean, though? Coaches’ recruiting strategies are arguably the most affected aspect of team building and, certainly now, player retention.

Sam Pittman’s philosophy thus far seems to be reliant on filling positions of need (Eureka!) and shoring up depth (ALAS!). In order for 2022’s prelude to carry forward the 2021 postlude momentum, every unexpected Foucha-style defection hurts, but avails a chance to upgrade, too.

So for every Foucha-like departure, the Hogs’ staff just gets a shot at fine tuning the roster further. With Myles Slusher and Jalen Catalon returning, the Hogs’ defensive backfield still pops.

Myles Rowser was a solid commit to his home-state Michigan Wolverines but the ‘22 prospect switched to Arkansas with a firm verbal last spring. The consensus four-star safety with a solid frame (6’0” 190 pounds) and a desire to hit was the one future Razorback who chose not to sign on early signing day in December. Instead, he’s waiting for the traditional National Signing Day on February 2.

In the meantime, the Detroit prep product is potentially subject to being wooed again from Michigan. When the Wolverines floundered in 2020, Michigan coach Jim Harbaugh’s job status seemed imperiled but his team rebounded to win the Big Ten and a national semifinal berth this season.

For what it is worth, the 247 Sports brass still thinks Rowser stays put. It helps Arkansas’ case that his brother Andre Seldon Jr., a Wolverine football player, recently entered the transfer portal. For sure, as much as fans may not like to see Foucha move on, it does open up more playing time for Myles Rowser. And that’s a good thing. Rowser’s general impact on this class and secondary is massive.

This is the new culture of college athletics, like it or not. Foucha’s service here is essentially unimpeachable, thankfully: he suffered under Chad Morris for two years before becoming a stalwart for Barry Odom’s defense in 2020-21.

Greg Brooks’ accomplishments were stout, too. His pick-six early in the 2020 upset of Mississippi State helped carry the Hogs to their first SEC win in nearly three full years.

And that’s sometimes the hardest thing to accept or understand. Why, we might muse, would a guy with three or four solid years here decide to close out the college life elsewhere?

The Razorback Secondary Survives the Purge

Even if the likes of Foucha, Brooks, and Brown have bolted, Odom’s got a pretty salty back end of the defense returning in 2022. Getting back tackle machine Bumper Pool, who announced his return for a fifth year today, is huge. The Razorbacks’ badly needed his leadership and consistency in a largely unproven linebacking corps otherwise.

At corner, Brown was flanked capably by the likes of Simeon Blair, and Hudson Clark, and experienced cohorts like LaDarrius Bishop, Malik Chavis, and Jayden Johnson also return.

For as much grousing as any of us could do right now, given the sudden chaos that NIL and the portal wrought, the Arkansas football roster is also in the best shape ever. Trelon Smith decided to take off, sure, but with the embarrassment of riches in the Hog backfield right now, that made sense, too.

Arkansas can’t make a 9-4 year excuse for complacency. Pittman, as celebrated for his recruiting acumen as anything else, seems entirely opposed to that, too. That’s been an issue in the past. Houston Nutt, Bobby Petrino, and Bret Bielema all managed to win at times on the strength of mostly marginal recruiting.

But consistency eluded them all, which is why the last Top 20 Rivals class the Hogs boasted was 2009, led by eventual five-star flameout Darius Winston.

Pittman’s 2022 class sits at No. 19, with the potential for it to tick upward slightly. And while some of these outgoing Arkansas football transfers clearly think greener pastures exist, Pittman secured two of the highest-rated incoming transfers in program history, too.

Landon Jackson and Jadon Haselwood, in fact, could step in immediately where Williams and Burks, respectively, made waves in 2021.

The departures are still somewhat unsettling. Then again, the entire context of college football changed sharply, almost overnight. If Pittman can meet these challenges, sign Rowser, and still preserve a healthy nucleus, then these defections might be viewed through a very different prism in short order.