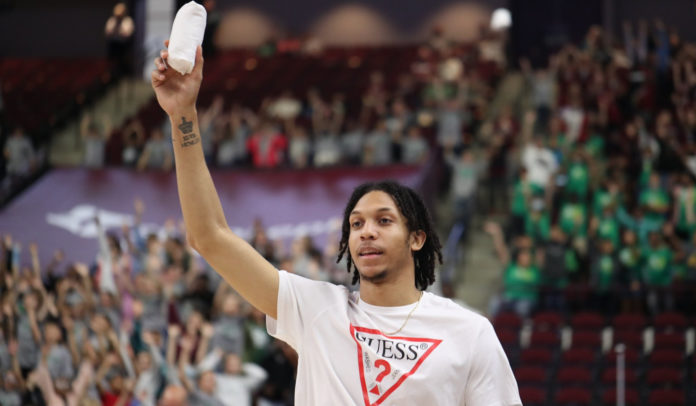 Arkansas is coming off of one of their worst losses of the season, a home loss to a perennial sub-par SEC team in the Vanderbilt Commodores. Sure, the Commodores probably deserve more respect for their impressive young season so far, nabbing two solid wins in their current four-game winning streak. But a loss in Bud Walton Arena against any SEC team is unacceptable by Arkansas basketball standards.

Now the Hogs turn their attention to Texas A&M for another SEC matchup on the road this Saturday, January 8th in College Station. The Aggies are 12-2 so far this season, including 1-0 in SEC play, winning their lone conference game against the Georgia Bulldogs (5-9) by a score of 81-79 in Athens. That gave the Aggies their 5th straight victory, including two power-five wins in that stretch, the other being the Oregon State Beavers. Texas A&M’s two losses this season have come to fellow power-five teams, Wisconsin and TCU, making them 4-2 in power-five matchups – including a win over Notre Dame.

Arkansas, meanwhile, is 2-3 against power-five caliber opponents – including a win over Cincinnati.

The Aggies are led in scoring by 6-5 guard, Quenton Jackson. The senior is averaging 13.3 points per game and shoots over 41% from behind the arc off the bench this season. Their usual starting backcourt consists of three, 6-2 guards in sophomore Marcus Williams, junior Tyrece Radford, and junior Andre Gordon. The trio is combining to average 27.7 points, 10.3 rebounds, and 7.2 assists per game while shooting just under 40% from long range. The Razorback guards will have their hands full yet again with a talented group of SEC guards that can shoot and share the rock.

Texas A&M has had a carousel of sorts in their frontcourt. Henry Coleman, a 6-7 sophomore forward, has been their most consistent starter, but they’ve also gotten starts out of 7-0 freshman Javonte Brown and a familiar face in 6-8 senior, Ethan Henderson. Henderson has appeared in all 14 games for the Aggies, starting five of them, and leads the team in blocks per game with 0.8 in roughly 17.5 minutes played.

Arkansas basketball coach Eric Musselman had only positive things to say about Henderson’s new role in a recent interview, saying “Ethan does a great job of understanding his game. He was a pleasure to coach, really nice young man, plays with energy, runs the floor really hard, really good shot blocker. Actually, Texas A&M is a great fit for him because they have a lot of shooting, great 3-point shooting team and that allows Ethan to play with space [in the paint].”

Overall, Henderson is averaging about 3 points and 3.5 rebounds on 64.3 field goal shooting. That may not sound like such, but the last time Arkansas played a former underachieving Razorback big man (Abayomi Iyiola of Hofstra) they got roasted inside for a loss. Going into this one, there should be zero underestimating what Henderson’s go-go gadget arms are capable of against his former team.

Despite losing their fourth game in five tries, Arkansas actually didn’t play poorly on the offensive side of the ball against Vanderbilt. Could they have played better? Absolutely. However, it wasn’t the offense that most dearly cost them the game. They shot a better percentage from the field than the Commodores, had more team assists, and won the turnover battle – all key points to winning SEC games. They also, however, shot an atrocious 64% from the free-throw line as a team after shooting over 80% in their last six contests combined, including a rare miss from Chris Lykes that would’ve tied the game in the closing seconds.

A pair of transfers had their best-combined game as Hogs on the offensive end as well. Stanley Umude and Au’Diese Toney combined for 48 of the Hogs 74 points and shot a combined 63% from the field and 44% from long range. This was Umude’s second good game in a row, a potential sign of things to come for the former 20-point-per-game scorer. If the Hogs can work out their issues defensively, their offense is in a good place to keep them competitive in most games.

It should also be noted that along with big games from new faces, one very familiar face struggled mightily against Vanderbilt. Devo Davis played only nine minutes against the Commodores, recording three turnovers, two personal fouls, and no other stats. It is Devo’s fifth time this season scoring six points or less, and his second time with no points at all.

Assuming the sophomore guard will find eventually his rhythm again as he has in his seven double-digit outings this season — including a 26-point game against Oklahoma — the Hogs could be in even better shape offensively moving forward with his contributions.

The Hogs are currently ranked 242nd in the nation in opponent scoring, allowing 70.9 points per game. While Texas A&M scores only 76.6 points per game, defense has been an issue for Arkansas against nearly every opponent this year. Could we be in for a change to the defensive scheme? It certainly seems possible. While previewing the Texas A&M game, Musselman mentioned playing a few possessions of 2-3 zone against Vanderbilt, something we might see more of moving forward if the Hogs continue to struggle defensively.

This game also features a former Aggie in current Razorback guard Jaxson Robinson. He makes his first return to Texas A&M, likely as a starter, while Henderson faces his former team in the Razorbacks after playing under Coach Musselman for two seasons. It will be interesting to see if nerves play a factor for either player facing their old team. It’s also worth noting the minutes distribution between newly-found sharpshooter Jaxson Robinson and familiar fan-favorite Devo Davis as the season progresses.

Coach Musselman said of Robinson back in October of 2021, “He keeps getting better. He really, truthfully should be an incoming freshman [this year]. He obviously reclassified up. A guy that we had great belief in when he was coming out of high school. Really, really, really good shooter. He continues to evolve defensively, but he’s got good length, he can rebound the ball for his position, he’s no maintenance to coach. We’ve all really, really enjoyed coaching Jaxson.” Musselman’s first statement seems to still ring true as fans have seen more and more of Robinson in recent contests.

Arkansas continues to fight on the offensive side of the ball but can’t slow down the 3-point shooting of the Aggies, even with additional defensive adjustments. With NCAA tournament hopes already becoming a factor early in the season, the Hogs drop to 0-3 in SEC play with another close loss on the road.