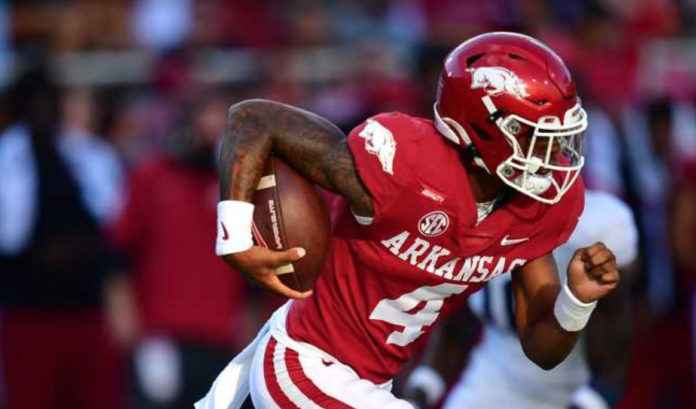 In a week where Hogs flew out of the football program like COVID-19 tests have disappeared from store shelves, the final piece of news might have been the clincher for Hogs fans.

An Arkansas team spokesman made it official Friday that redshirt freshman Malik Hornsby, the Texas native, has indeed entered the transfer portal. If all of the defections in the secondary this week didn’t cause the Arkansas football faithful to freak out, this news might.

Of course, Arkansas has sophomore redshirt start QB KJ Jefferson, who should be a darkhorse Heisman Trophy candidate in 2022, returning. That will be a major factor in Arkansas becoming a fringe Vegas possibility for an SEC title come 2022, according to NCAAF picks. But the quarterback room is now void of much other talent.

In fact, the only scholarship quarterback other than Jefferson is redshirt freshman Lucas Coley. John Stephen Jones has a season of eligibility left but may not return, and Kade Renfro, a walk-on from Ole Miss, is recovering from knee surgery. Landon Rogers, the former Little Rock Parkview star, came to Arkansas as a QB but moved to tight end when he got to campus.

So, Arkansas football coach Sam Pittman has one stud and a no insurance policy, it appears at this point. That has Hogs fans bent out of shape on social media and the message boards. What’s new? It doesn’t take much to trigger insane paranoia in this fan base.

Yes, it’s a dilemma, but no it’s not a crisis. First, you’ve got Jefferson. He’s proven to a be a big-time playmaker, and he’s healthy [Razorback fans knocking on wood], and while he is a star, it’s not a foregone conclusion (yet), that he may not stay for his final season like linebacker Bumper Pool chose to do Friday (The best bit of news this week for the Arkansas fan base).

But, fans would be quick to point out that Arkansas needs a more proven option behind Jefferson in case he gets hurt and to transition into the future. They’re right, but as we have learned the transfer portal is a two-way street. The emphasis this week was on how detrimental it has been for the Hogs program after the high of winning the Outback Bowl and finishing 9-4.

But just a few weeks before, Pittman received fantastic news when Oklahoma star wide receiver Jaden Haselwood announced he was coming to Fayetteville. Pittman and offensive coordinator Kendal Briles will just need to go shopping. Find a QB who, like Hornsby, has some experience but hasn’t liked where he’s been (that shouldn’t be too hard to find in today’s climate of college football with the revolving door.)

The selling point are as follows 1) Compete to back up and learn from one of the best QBs in the country on a team that is destined to be preseason Top 15. 2) Have a chance to start in the second year if Jefferson does declare for the NFL draft – second year, worst case scenario. Go out and find one, maybe two, young transfers who can compete with Coley and by the time fall camp arrives, be the No. 2 guy.

If we’ve learned anything from Pittman it is – he doesn’t panic, and he knows how to deal with adversity. And I wouldn’t even call this adversity. The losses at defensive back are a bit troublesome, but also fixable. The QB room can be replenished quickly, and the situation remedied.

What Could Have Kept Malik Hornsby Happy

As for Hornsby, it’s a smart move. In the Outback Bowl win, he showed the kind of speed around the edge that made him worthy of his own package. Let’s also not forget, he helped preserve a lead in the big win against Texas A&M in September. Briles might have appeased him had he installed package of plays that lined him up at QB and Jefferson at receiver, ala a Wildcat formation.

Think of the fun you could have there. Hornsby looked confident running the ball against Penn State late in the second half when Jefferson got a bit banged up. Surely, some program could play him immediately.  That’s what he is banking on, and now he has fresh tape to show. He needs to improve as a passer (5-of-12 for 46 yards in 2021) but given more reps that could work itself out. He saw writing on the wall in Fayetteville, and he can probably better use his three remaining years of eligibility somewhere else if he was going to just sit the entire next season cheering on Jefferson.

Pittman and Co. will figure this out. The QB room will be stocked with more talent, and an Arkansas quarterback replenishment plan will be in place for life after Jefferson.

Trey Biddy of Hawgsports had a good breakdown on his most recent podcast: “What you see with Hornsby is just breathtaking speed. The issue isn’t whether or not Hornsby is accurate as a passer or if he can throw because he can do those things. The issue is knowing where to go with the ball….”

“Once that light goes on, if it goes on, watch out because man I see a Nick Marshall, Pat White type of player developing there. If he ever gets to where he knows to go with the ball… Nick Marshall wasn’t a really good passer but he was so scary. He was so scary with his legs that everybody had to respect it and it opened up so much of the passing game for him. He threw for 2,500 yards one year. Almost 2,000 the other year when they went all the way to the national championship game.”

Next Arkansas Quarterback from the Transfer Portal?

Malik Hornsby has joined a lot of other backup quarterbacks from other college programs in the transfer portal. It would make sense for Arkansas to try to sign one of these to add depth to a quarterback room that is essentially down to KJ Jefferson and Lucas Coley.

Here are some potential future Arkansas quarterback candidates to monitor: