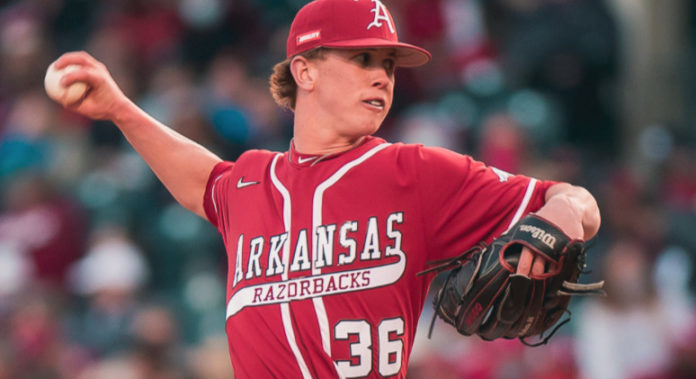 The Razorbacks lost a lot of star power from the mound after 2021. For starters, they lost Golden Spikes winner Kevin Kopps and All-SEC pitcher Patrick Wicklander.

Arkansas also saw notable names such as Lael Lockhart, Ryan Costeiu and Caden Monke get taken in the MLB draft.

The five above mentioned pitchers along with Caleb Bolden, who transferred to TCU, combined for 333.2 innings pitched in 2021. That’s 60% of the total innings pitched for Arkansas last season.

The 2022 staff, however, appears to be even deeper than the ’21 rotation of Arkansas pitchers, which was pretty top-heavy. There’s ample opportunity for some young guns to make their mark. Consider of the 30 pitchers who were on the 2021 Arkansas baseball roster, 12 have departed the program. That’s 340.1 of 558 innings, or 61% of total innings pitched, leaving the Razorbacks with them.

This year the Hogs have a lot of new weapons to pick from as well as some more developed pitchers.

The infusion of talent starts with top-two ranked freshman pitchers in their state in Hagen Smith from Texas and Nick Moten from Missouri. The Razorbacks are also bringing in the top-ranked pitchers from Mississippi in Brady Tygart and from Wisconsin with Vincent Trapani.

The Hogs will also include a top-10 recruit out of Kentucky in Jake Faherty as well as former top-10 recruit from Arkansas and Crowder College transfer Dylan Carter.

As far as who will start weekend games early on in the season, here are my predictions:

The Hogs will return 2022 preseason All-American Peyton Pallette, who may have been the missing link in the 2021 NCAA tournament as the Razorbacks seemed to lack depth in starting pitching in the tournament.

Pallette produced a misleading 4.02 ERA with 67 strikeouts over 56 innings last year. The final numbers don’t tell the full story of his season. His ERA drops to 2.47 if the Alabama and Ole Miss games are excluded where he allowed 11 earned runs in five innings of work between the two games.

Pallette is the No. 5 overall college prospect and the top-ranked college arm for the 2022 MLB Draft, according to Baseball America. So, clearly, he’s is the ace of the 2022 rotation going into the season.

Another returning pitcher who should factor into the rotation is Jaxon Wiggins.

The hard-throwing pitcher started 2021 as a reliever, earning four saves early in the season. He developed into a starter by the end of the season. Four of his last five appearances were starts.

As a starter, Wiggins allowed three runs over 10.2 innings with 12 strikeouts. That’s a respectable 2.53 ERA and 10.1 K/9 over a small sample size. Those numbers look better than his 5.09 ERA for the year. He also had his numbers inflated by Ole Miss in the wild 18-14 series finale. His ERA drops to 3.22 without the five runs over 0.2 innings against the Rebels.

Hagen Smith is the Hogs’ top-ranked pitching recruit for the class of 2021. He had an outstanding senior season including seven no-hitters.

It would be great for his development to get him starts early in the year in non-conference matchups.  Wiggins was the only true freshman to make a start for Arkansas in 2021, but Noland and Wicklander combined to make 34 starts as true freshmen in 2019.

Early in the season the mid-week starts could be between veterans Connor Noland and Zebulon Vermillion. Both have starting experience but have something to prove after a trying 2021 for them both.

Noland started the season off badly including an injury that cost him the entire month of April. He allowed nine runs in a combined inning of work over two games a month apart. After that, he made six appearances allowing two runs over 8.2 innings, including three shutout innings against Ole Miss.

Vermillion started 2021 as a starter but was later delegated back to the bullpen. He made consecutive eight-inning starts against Louisiana Tech and Alabama, allowing one run in each start early into the year. From there, though, it was downhill. In his next and last two starts of 2021, he allowed seven runs over six innings.

Zebulon Vermillion ended the regular season with three consecutive scoreless outings out of the bullpen. Vermillion faced one batter in the postseason, allowing a home run before an injury ended his season. Vermillion proved he could start so he may be a midweek starter early in the season before possibly transitioning back to the bullpen for conference play.

The Razorbacks have a lot of talent in the bullpen for 2022. The question is who will get all the innings. A lot of the innings from the 2021 bullpen got drafted with Kopps, Monke and Costeiu. The trio combined for 153.2 innings last season.

The previously mentioned incoming freshmen of Brady Tygart, Vincent Trapani, Nick Moten and Jake Faherty should all see innings early to see who will develop into an SEC-caliber pitcher. Each could see time as a starter as well because each of them have a lot of potential. Smith could also see time in the bullpen if he’s not a starter come opening weekend.

Appearing on the scene at the end of 2021 was Heston Tole. He finished the season with a 2.25 ERA over 12 innings. He allowed three runs, but two came in one appearance against NJIT in the Fayetteville Regionals. Tole could start the season in the closer role due to his success in the latter portion of the season.

Another big piece to the bullpen in 2022 will be Elijah Trest who was drafted in the 19th round by the Colorado Rockies but opted to return to Arkansas. Trest only pitched 14.1 innings in 2021 to the tune of a 3.14 ERA. The senior should shoulder a much heavier workload this year.

The two other returning pitchers with the most innings pitched are Kole Ramage and Zack Morris. Ramage pitched 24 innings while Morris tossed 15. Each man had their struggles finishing with a 6.75 and 4.80 ERA respectively.

Of the 18 returning pitchers, five did not pitch in 2021. Among those five is former class of 2020 top-100 national recruit Nick Griffin who was recovering from Tommy John surgery.

A couple of promising question marks are Gabriel Starks and Will McEntire. Starks is a hard-throwing righty who flashed promise in limited action.

Baseball America named Starks the third best prospect in the California Collegiate League in summer 2021. Starks had an unimpressive 5.06 ERA but had 13.5 K/9 over 16 innings and made the all-star team for the league.

McEntire showed promise in 2020, allowing one run over eight innings of work before the season shut down. He said he lost the touch on his best pitch, a cutter, coming into 2021 causing him not to see any action.

He left the team during the NCAA tournament to get a head start on summer league baseball and it may have paid off for his personal development, according to WholeHogSports.com. Although there was a cost, too: McEntire had to watch the Super Regionals from a hotel room in Minnesota while he played for the Duluth Huskies.

Will McEntire made 11 appearances including 10 starts and pitched 59 innings with a 2.59 ERA and a modest 8.7 K/9. It doesn’t seem normal for a player to leave while his team is in the playoffs, but it may have been just what McEntire needed.

The Razorbacks have an array of options to use out of the pen in 2022. While the bullpen should be able to share the load more this year than in 2021, nothing is certain with this many inexperienced players coming aboard. Questions involving their mettle will be answered soon enough.