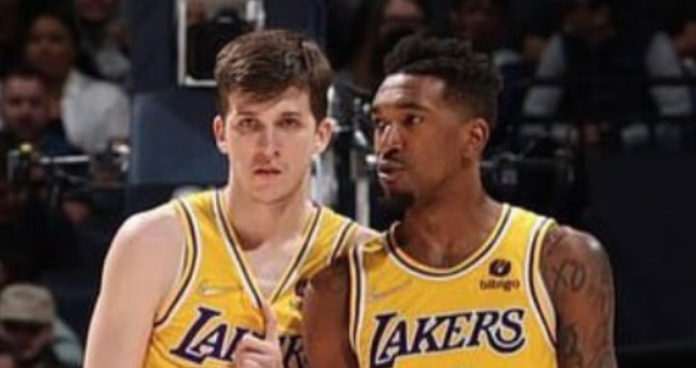 However, that is what happened last week in the Los Angeles Lakers regular-season finale – a 146-141 overtime win over the Denver Nuggets.

Reaves, the pride of Newark, Ark., was sensational exploding for 31 points, 16 rebounds and 10 assists – all career highs for the rookie, who was a standout at the University of Oklahoma and won three state championships at Cedar Ridge High School. In his last season at Cedar Ridge, he averaged 32.5 points, 8.8 rebounds and 5.1 assists.

“It feels amazing, and at the end of the day, It’s just basketball,” Reaves told Spectrum SportsNet following the game. “I’m lucky to be here playing basketball as my job.”

The performance was on one of the few bright spots for an underachieving Lakers team which failed to make the playoffs and fired its coach Frank Vogel soon after that final win.

“It hadn’t been the year we wanted it to be, but things happen, and you move on, and you get better, “Reaves continued. “That is why we play the game – is joy. If we didn’t love the game, we wouldn’t play it. Everybody in the NBA loves the game. Even though this game didn’t mean anything, it was just another opportunity to show what you can bring to the table and go win a game.”

The leading scorer for the Lakers with 41 points in that finale was Monk – a much more familiar name for Razorbacks than Reaves. That’s because even though they both were raised in northeast Arkansas, Monk starred as a freshman at East Poinsett County high school leading EPC to the Class 2A state title game (where the opponent was Cedar Ridge) before finishing his high school career at Bentonville under the watchful eye of his brother Marcus, a former Hogs receiver.

In the fall of 2015, he spurned his brother’s alma mater to attend Kentucky. He was ranked as the top shooting guard in in the country and was a McDonald’s All-American on a Bentonville team which lost to Cabot in the Class 7A state championship game.

Monk starred in his one season at UK going landing on the All-SEC and All-SEC Freshman team. He declared for the NBA draft following the 2016-17 season. The Charlotte Hornets selected him with the 11th pick.

Monk, who was suspended indefinitely in his third season for violating the NBA’s substance abuse policy, struggled to find an identity on the hapless Hornets.

Moving to one of the NBA’s more storied franchises for his fourth season was supposed to be a pick-me-up playing a supporting role to NBA legend LeBron James, rising star Anthony Davis and longtime star vets Russell Westbrook and Carmelo Anthony.

And while the team never gelled with a glut of injuries, Monk did enjoy career highs in minutes (28) and points (13.8). He averaged 11.7 ppg game in his final season in Charlotte and now is averaging a little more than 10 points for his career.

The success of these two Arkansas natives in Lakers backcourt in the season finale prompted Ronnie Brewer Jr., who works on the Razorback basketball staff, to share some public approval on Instagram when responding to Monk’s state-pride post:

On the above post, Brewer left the comment: “Love to see it.” This is more than just state pride coming through here. Both Monk and Reaves played in the Arkansas Wings AAU basketball program and Brewer was a coach in that same program (now called The Woodz Elite) for years. Brewer is also good friends with Marcus Monk and helped train Malik when Malik Monk was a teenager.

While the Razorbacks, then under Mike Anderson, recruited Monk hard, they weren’t willing to wait around for Austin Reaves to qualify. As Otis Kirk wrote, “Reaves was a late qualifier out of high school or he would have likely been recruited much more heavily.” After transferring from Wichita State in 2018, Reaves gained interest from Arkansas, Arkansas State (where his parents had starred in basketball), UALR and approximately 20 out-of-state schools, according to Kirk.

A few Lakers fans would like to see Brewer’s current boss, Eric Musselman, coach these Arkansans in the next few years.

The Lakers’ first order of business is to find a new head coach. The fact that Arkansas basketball coach Eric Musselman is a perfect fit for the job probably has the always-paranoid Hogs fan base losing collective sleep. Already, 247Sports’ Eric Bossi listed as Musselman as one of four college coaches who meet the NBA’s desire for experience. “He’s earned his reputation as a program builder and would certainly be somebody that would be intrigued by the idea of getting to build a program at the very highest level of basketball,” Bossi wrote of Musselman.

Luckily for Arkansas, though, the timing isn’t good for Musselman. Plus, it’s doubtful he’s on LeBron James’ short list which anyone who has followed his career knows will be a determining factor in the hire.

When that hire is made, the new Lakers coach needs to get rid of the inconsistent Westbrook and finally send Carmelo Anthony to the retirement home and give more minutes to Monk and other young talented Lakers such as Reaves and former Iowa State standout Talen Horton-Tucker.

A lineup with James and a healthy (a big if) Davis with Monk as a third option and the up-and-coming Reaves coming off the bench could make LA formidable next season. Reaves, who hit the game-winning shot against Dallas in a game early in the season and averaged 7.3 points per game as a rookie, is only going to get better. His upside is tremendous. Also, with the Lakers there is opportunity to bring in free-agent talent. They just need to be more discerning.

There is a very real chance that two Arkansans from tiny towns outside of the state’s two biggest populated regions could be a part of the next chapter of winning for Los Angeles. Their presence is definitely a reason for Arkansans to keep tabs on the Lakers in the future.

At least one member of the Razorback basketball staff will.