Search
Home Arkansas Baseball Around the SEC Leading Arkansas Sportscaster on Tony Vitello: “He’s Going to Make So Many... 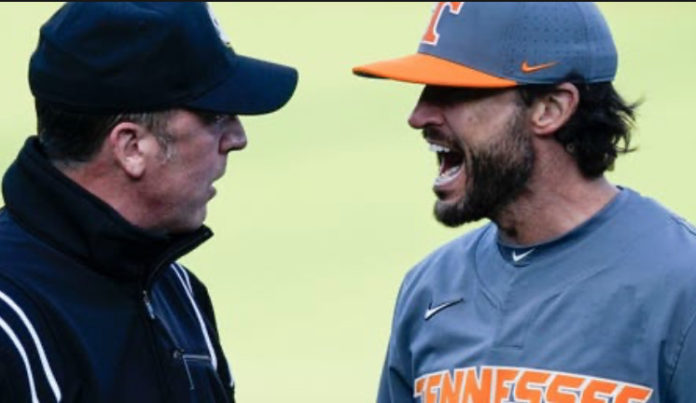 Napoleon Bonaparte, the controversial French military and political leader, died in 1821. More than two centuries later, he remains so infamous that all one needs to do is mention his first name – like he was Prince or Bono or Madonna or Beyonce – and connotations come flooding. The man even has a derogatory psychological stereotype named after him regarding compensatory behavior and exaggerations.

Sports fans get this designation from time to time. It usually manifests itself as an over-inflated sense of accomplishment and ego resulting from short-term victories. Sometimes it’s more pronounced after years of perceived underestimation from opponents. Sure, Arkansas is familiar with it, as all who remember the intensity of adoration for Chad Morris when he was hired can attest. But in the last several days, supporters of the Razorbacks, long the stalwarts of SEC baseball, have been proclaiming Tennessee, the No. 1 team in the nation, as having a Napoleon complex.

Rather, it should be clarified: Arkansas and Tennessee fans have engaged in a nasty back-and-forth on social media – mostly, Twitter, you’d be shocked to hear – about the Vols’ accomplishments, namely a remark from a Tennessee fan that suggested the Volunteers were to SEC baseball what Alabama is to SEC football. The always reasonable reactions hit the offending fan’s timeline like a house on fire.

Things were heated enough that traditional media outlets began to pick up on it. Pig Trail Nation’s Mike Irwin, the dean of Arkansas coverage in the broadcasting medium and a man who has forgotten more Hogs anecdotes and tales than I’ll ever know, tackled the subject earlier in the week.

“Tony Vitello, their (Tennessee) coach, has always been this way. He’s an in-your-face kind of guy. He goes out and recruits guys like that,” Irwin said on “Ask Mike.” “They do a lot of gesturing during games. They mouth off. It’s sort of what (Arkansas coach) Dave Van Horn was talking about in his preseason press conference when he talked about there’s some teams in the SEC that ‘I don’t really like what they’re doing.’ He was talking about Vitello and he was talking about Ole Miss.’”

There’s the rub. A lot of the animus between Arkansas fans and Tennessee baseball fans stretches back to that relationship. Vitello was an assistant on Van Horn’s staff at Arkansas from 2014-17. He left the Razorbacks to take over a then-moribund Volunteers program. The speed at which he has turned Tennessee into contenders has been remarkable. In Vitello’s second year, the orange-and-white finished third in the SEC East, their highest finish since 2005. They won 40 games that year for the first time since that same season. Last year, they won 50 and made the College World Series.

On their way there, Vitello and Van Horn got into a bit of a dust-up. There were – ahem – words exchanged between the two, leading to speculation about the topic. Irwin, and others, assert strong differences in the way Vitello and Van Horn have chosen to go about their business. Justifiable. But, according to both, the fences have been mended. Fan, on the other hand, is short for “fanatical” for a reason:

The Tennessee baseball faithful have a reason to be thrilled with where their program is in the Vitello era, their recent 23-game winning streak snapped by Tennessee Tech and series-opening loss to Alabama notwithstanding. Arkansas, of course, has long been more than happy with Van Horn, postseason losses to the likes of Oregon State and North Carolina State notwithstanding. Still, the Diamond Hogs have been one of the preeminent teams in the entire sport of college baseball practically every season Van Horn has been at the helm. Five College World Series appearances and 17 NCAA Tournaments in 18 seasons will earn that. The Vols, meanwhile, have been to the NCAA Tournament a total of 11 times in school history.

The tweet from the fan comparing Tennessee baseball to Alabama football was silly. It also isn’t necessarily reflective of what actually happens on the diamond. The bigger question, at least for the long-term, is where this rivalry is headed. Unfortunately for all of us, the Vols and Diamond Hogs aren’t scheduled to meet during the regular season.

“Here’s what will happen to him long term: he’s going to make so many enemies, so many other fan bases, so many other coaches, so many other teams that pretty soon it’s going to reach a point where it’s the rest of the SEC against Tennessee,” Irwin said. “They will take them down eventually. You can’t continue to operate that way. … That will eventually bring your program down, I believe.”

This kind of Tennessee vs the world prediction is already playing out.

On Saturday, Vitello and the Volunteers pitching coach got ejected in the first inning of Game 2 vs Alabama.

It all started when a Tennessee pitcher Chase Dollander was hit in his throwing arm with a line drive. After a heated conversation, Tennessee coach Frank Anderson was thrown out and Vitello stormed over to the umpires to discuss the situation. After an animated conversation near the pitcher’s mound, Tony Vitello was tossed from the game.

But then Vitello crossed the line: Following his ejection, while still on the field, Vitello bumped his chest into the umpire, who stumbled backward:

Now, Vitello must serve a four-game suspension. It’s Vitello’s second suspension in his five-year tenure as UT’s head coach. He was suspended in 2018.

Suffice to say, you’re not going to see Van Horn get thrown out for bumping chests with any umpires any time soon. Vitello didn’t even dare get that close to Van Horn last year during the tiff.

As for Arkansas, they are rarin’ for a crack at No. 1 Tennessee after a sweep of No. 15 LSU this weekend. More and more, the Arkansas baseball players are tipping their cap at the reality of the rivalry. Robert Moore got the ball rolling in the press conference after the Game 3 win vs LSU on Saturday: “I think we are going to go into the (SEC) tournament and shake a lot of heads too with a team that’s at the top of the East.”