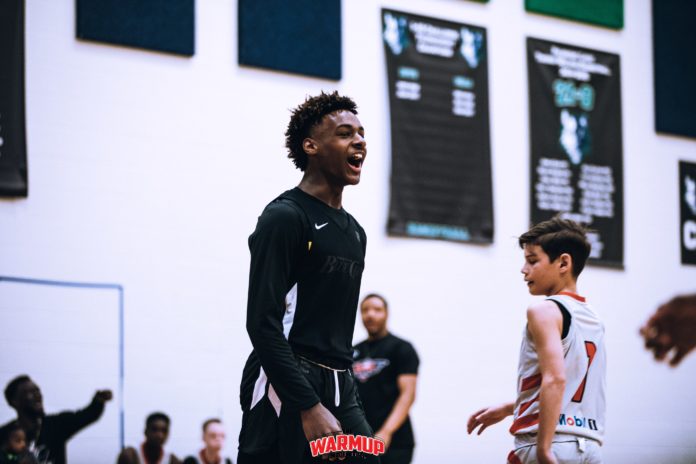 It’s hard to imagine a teenager with more to live up to than LeBron James Jr. The 14-year-old eldest son of the best basketball player of the 21st century seemingly has had every advantage imaginable.

LeBron James Jr., aka “Bronny,” gets to have Dwyane Wade as his godfather. He gets to play one-on-one with Russell Westbrook, his favorite NBA player and the reason he wears No. 0. And, oh yeah, he gets constant one-on-one mentoring and feedback from the 4-time NBA MVP and three-time NBA champion LeBron James.

Bronny James isn’t the first son of an NBA legend to come of age with silver spoon in hand. Jeffery Jordan, the eldest son of Michael Jordan, grew up in the early to mid 2000s in Chicago and got plenty of local and national media attention.

Though Jeffery Jordan (and his younger brother Marcus Jordan) were very good at basketball, quality enough to eventually play for the likes of Illinois and Central Florida, they were not jaw-dropping talents anywhere in the same realm as their father. On top of that, they grew up in an era when social media was still in its infancy, not yet the multi-tentacled monster creeping into every corner of society it has become in the late 2010s.

This means LeBron James Jr. can’t escape the camera and smartphone’s glare, even if he wanted to. His every on-court move is amplified a million times, in tens of millions of posts and reshares, through Instagram, YouTube, Facebook, Twitter, probably Snapchat and Lord knows what else.

But here’s the biggest difference between the eldest son of LeBron James and the sons of Michael Jordan: Bronny James, it appears, is already better than his father at something basketball-related. In 2017, LeBron James Sr. said of Bronny: “I didn’t handle the ball as well as [James Jr.] does. He handles the ball exceptionally and he shoots it a lot better than I did at that age, but I’ve always had the ability to pass the ball. It’s good to see him doing it as well.”

This is heady praise, considering James was a dribbling and passing phenom even as a young teenager. But the 6’8″ King James was also taller than Prince James at the same age (LeBron James Jr. is 5’11”), and while that means King is more a physical freak, Bronny has a chance to be a tighter ball-handler as a combo guard closer to the ground.

See evidence of this, front and center, in the sick highlights below:

Bronny’s prodigious skill and precocious celebrity status has already gotten him scholarship offers from the likes of Duke and Kentucky. Still four years away from college, it appears he’ll play at a high major college with an athletic scholarship.

But the Hype Machine of the Internet has a way of blowing things out of proportion.

How good, really, is LeBron James Jr. in vivo?

Fortunately, I had a chance to see on a recent Sunday. His AAU team arrived to play in a Made Hoops weekend tournament in Bentonville, near my home in Rogers. They played at Fulbright Jr. High, a local junior high powerhouse that has won multiple championships in football, basketball, track and field and volleyball. Fulbright Principal Bradley Webber, whose daughter attends kindergarten with my daughter, said he jokes with his coaches: “If it’s not an undefeated season, the banner’s not going up. We only have so much wall space.”

The school benefits from being in the same neighborhood as a lot of well-paid employees of Walmart and vendors of Walmart (Bentonville is the world headquarters of the mega retailer). Compared to schools in poorer neighborhoods, some Fulbright parents can pay for more private athletic trainers or allow their kids to attend more sports camps and play with traveling teams.

Upon entering, the Fulbright gym’s decor immediately brought a smile to my face. My favorite NBA player growing up in the ‘90s was former Minnesota star Kevin Garnett, and the school reps the Timberwolf as its mascot pretty hard.

Normally, I wouldn’t give a Flip (Saunders) about a 14-year old basketball player. I’d rather see recruits when they’re old enough to actually drive. But Bronny James is an exception.

The first thing I found out was that he’d played the hero just minutes before, hitting a game-winning shot in triple-overtime against Blake Griffin’s AAU team. Below is a video showing the Bentonville, Ark. highlights of Bronny and his North Coast Blue Chips AAU squad. Fast forward to the 8:20 mark to see him hit the game-winner:

These clips are more evidence of James’ elite dribbling ability. That game winner helped his team advance in pool play of the 14U tournament.

When James took the floor again for the next game, the gym was about 2/3 full, though he had played in front of three sell-outs the day before.

The Blue Chips feature a kid who is already the size of an SEC offensive lineman. When I told my 6-year-old daughter that the best player in the world’s son was playing on the court, she could not believe that it wasn’t the huge kid.

I pointed out that the one to watch was wearing a cape during warm-ups. Here is the son of Superman dunking:

At 5’11”, Bronny James primarily plays off-guard. Just like his dad, he’s a pass-first player. “Ultra-smooth” is the best way to describe his game, even though his shot is naturally still a work in progress. He glides on the court with a precision that is highly unique for a teenager that young.

He even dribbles the ball with the same kind of regal posture and style as LeBron James Sr.:

James doesn’t overpower opponents on the forays to the hoop, like dad does, but he does show those highly advanced handles, quickness and leaping ability.

The most notable thing about Bronny James, at this stage of his young career, is how he carries himself. He oozes poise and seems to be constantly probing the defense’s weak points. It’s not hard to imagine his coaches and dad giving him pointers on how to diagnose a defense’s weak points and best take advantage of that at any given moment.

It’s uncanny how much of his game, from his defensive posture to his passing technique, looks like dad’s. It appears he can already palm a ball, which is a huge advantage for any player, especially those who handle the ball a lot:

Bronny James doesn’t have the physical edge of his father, nor of a Lance Stephenson or Russell Westbrook for that matter. Even at his precocious age, Bronny James comes off as a very cerebral player. I have never met a 16-year-old basketball player, let alone a 14-year-old one, who could be described like that.

It will be fascinating to see how his game develops in the coming years. Bronny James won’t be the same once-in-a-lifetime physical specimen his father is, but can he hone his mind and basketball IQ to one day equal his dad’s understanding of the game?

If so, he’ll have a tremendous career even if he “falls short” of becoming a Top 3 player of all time.

I’m not the only one interested in this evolution.

It seemed no less than 10 cameramen and videographers were taking photos and video of James’ games. Don’t be surprised if there is some kind of documentary in the works, tracking the ups and downs of the crown prince of basketball.

Interested in the heritage of NBA players from Arkansas? Preview my book, which includes stories about an Arkansan “Jackie Robinson of the NBA” and the would-be Razorback pioneer Eddie Miles, by clicking here:

For an alternate angle of Bronny’s Bentonville heroics in super slow-mo, check this:

[Major props to Made Hoops’ photographer Jeff Armstrong to allow republication of the feature photo. Read more on Bronny James in Arkansas (compared to Malik Monk) at OnlyInArk.com]