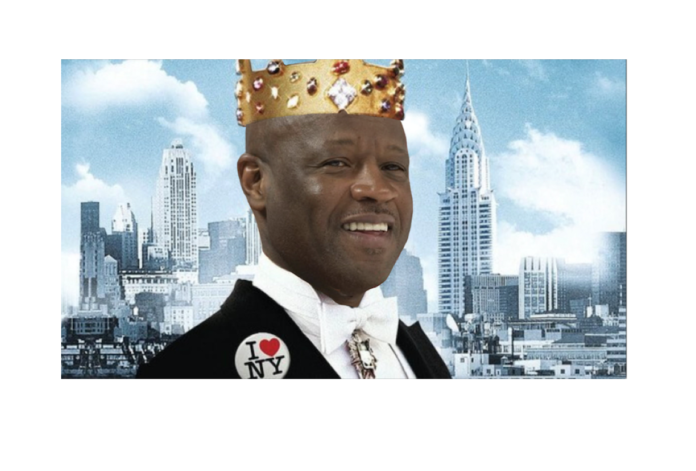 So no, the fit isn’t as jarring as what Eddie Murphy’s crown prince character, Akeem Joffer, experienced when coming to New York City for the first time.

Mike Anderson, after eight season as the head Razorback basketball coach, is heading to New York City to coach St. John’s. In the same way he was expected to bring Arkansas back to its 1990s glory days, so are St. John’s hoping he can lead them back to its mid-1980s heyday, when The Red Storm broke into its last Final Four.

This unexpected turn of events began 10 days ago, when St. John’s head coach Chris Mullin stepped aside after four subpar seasons. Mullin’s older brother, Roddy, died recently at age 58 after fighting cancer for years and Mullin’s cited his departure as due to a “recent personal loss.” The Red Storm whiffed on their top two targets: Arizona State’s Bobby Hurley and Loyola-Chicago’s Porter Moser, according to the New York Post.

St. John’s Athletic Director Mike Cragg contacted Mike Anderson on Wednesday, and then interviewed Yale coach James Jones and NBA scout and former Georgia Tech coach Paul Hewitt on Thursday. He went for the 59-year-old Anderson, who it’s been noted just a tiny bit has never experienced a losing season in his 17 years as head coach.

“What a whirlwind. Got a call Wednesday and I’m up here right now fitting to be the head coach of St. John’s. “I don’t know how things happen but they happen for a reason,” Anderson said during a Friday press conference.

He added: “I was part of an NIT Championship team that played here in Madison Square Garden in 1981 and beat Syracuse in the championship game. I played for a little team called Tulsa University, coached by Nolan Richardson. It was my first year playing major college basketball and now you flash forward to where we are today and I am having a press conference where I won my first college championship as a player.”

Anderson, an Alabama native, went on to coach for Richardson at Tulsa and then Arkansas. He also coached UAB and Missouri. But he has no ties to the Northeast. It’s also surprising that St. John’s would opt for a style of basketball that is harder to win big with than ever before.

Anderson’s “40 Minutes of Hell” based defense allows its players to gamble trapping and pressing on defense. “For the fans it is going to be exciting, when you come into that arena for two hours it is going to be sheer entertainment,” Anderson told the St. John’s faithful. “If you go to the bathroom for a break, you are going to miss something. I can’t wait to roll my sleeves up and really just go to work.”

But there are key differences between the 1990s, when the style fueled Arkansas’ run to the three Final Fours, and the game today. In the 1990s, if the gamble didn’t pay off, then the other team might have had a 3-on-2 or 4-on-3 fast break and get a layup out of it. But in today’s basketball landscape, such a fast break is just as likely to end up costing the pressing team three points, not two points.

These kind of open threes killed Arkansas through the years during the Mike Anderson era. But then again, the SEC was a conference on the rise through the last half of his tenure, nearly as deep and talented as any in the nation. The Big East is no longer a top-tier conference, so his pressing style may have more luck against rosters that are not as deep and skilled with dribbling and shooting.

This doesn’t faze Mike. “I know what it takes to win championships,” he said. “I’ve had a chance to win one as a player and as an associate head coach. My goal as a head coach is to win a championship.”

‘We are very proud that we have found the best coach in Coach Anderson…We are going to win championships,” St. John’s AD Mike Cragg added.

But there was a lot of eye-rolling from Arkansans when Anderson trotted out the below lines, something he also said in Fayetteville at his introductory press conference for the Hogs eight years ago:

One of the biggest questions surrounding Anderson in this new job is how he’s going to recruit an area to which he has no ties.

Marc Hsu – An assistant coach with Western Kentucky who spent the 2008-10 seasons at Binghamton in New York. Hsu’s Western Kentucky team beat Arkansas in Fayetteville this December, a loss that ultimately proved to be one of the worst of the Hogs’ season.

Andy Borman – An AAU director with the New York-based powerhouse Rens, Borman played on the 2001 Duke national championship team. A Brooklyn resident, he’s well connected and has coached and helped over 75 players receive Division 1 scholarships and many more play at the Division II & III levels.

TJ Cleveland – Mike Anderson’s nephew, he’s been by Anderson’s side as an assistant at each of this three previous head coaching stops.

Anderson will need to hit the ground running because the late signing period already is underway. For now, St. John’s has only seven scholarship players for 2019-2020.

Could any current Razorbacks end up transferring to St. John’s? Too early to tell, but if any player ends up deciding that he doesn’t mesh well with Eric Musselman or his system, then playing for Anderson has to a possibility. Lots of love being shown Mike Anderson’s way right now, but if such a transfer happens, that tune may change.

Here’s the former head Hog in action during his first day on the job:

How in the world did the St. John’s AD get wind of Anderson in the first place? The back story will surprise you…