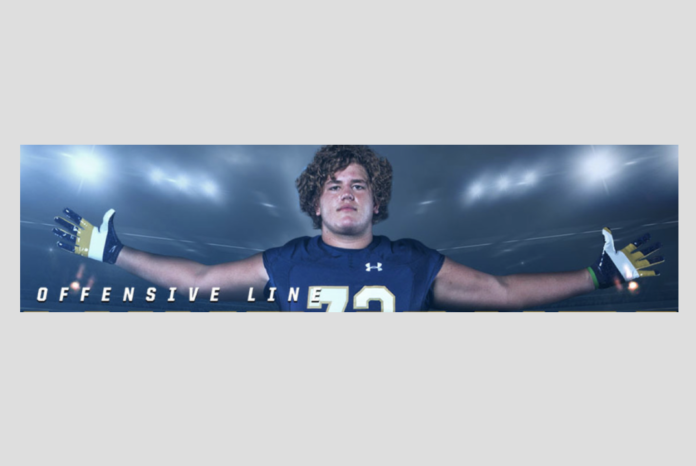 The Pulaski Academy Bruins have long been a powerhouse in the prep football scene in Arkansas. The program ranks with the likes of Greenwood as the most consistent winning program in the 21st century.

In the last 15 years, Bruins Jonathan Luigs and Hunter Henry went on to star at Arkansas, becoming All-Americans in the process. But in the Chad Morris era it seems as if there is an uptick in the number of championship-winning Bruins going to play football on the Hill.

Currently, there are three Bruins on campus who play for the football program. One is Jonathan David White, a walk-on freshman and one of the most prolific wide receivers in state prep history. The other two are younger brothers of Hunter Henry — linebacker Hayden Henry and tight end Hudson Henry.

Today, though, they welcome a fourth Bruin Razorback:

Luke Jones, a rising sophomore, was one of the most recruited players in the state of Arkansas in the class of 2018. He was the No. 43 offensive tackle prospect in the country and the No. 4 overall player in the state, as tabulated by the 247Sports Composite rankings. Notre Dame, Arkansas, Missouri, Oregon, Virginia and more than 12 other schools offered him.

Here’s a great video profile from KATV diving into the details of his first offer from Arkansas during the Bielema era:

Given Jones’ enthusiasm for Arkansas (“It feels like home”), and his brother’s status as a student there, it’s no surprise he committed to Arkansas in the summer of 2017. But five months later Bret Bielema was fired and Jones flipped his pledge to Notre Dame. Chad Morris brought him in on an official visit, but it was not enough..

After he decided to transfer back home, he heard overtures from Nebraska, Ole Miss, Arizona State and Oklahoma State. This time around, though, he was set on playing for the Razorbacks under Chad Morris. Jones will enroll for summer classes and try to gain immediate eligibility. As it is, he’ll need to sit out the 2019 season before knocking some heads come 2020.

Jones’ size and experience will prove useful in adding depth at the center spot for the Hogs. He adds “quality depth” to a position that has long needed it, Razorback commenter Ty Hudson says. And, as Danny West reports for HawgSports.com, “Arkansas’ current situation at center begins with a returning starter in junior Ty Clary, who has often struggled with his snaps, followed by a trio that is very low on experience in redshirt-sophomore Shane Clenin (seven career games played), redshirt-freshman Silas Robinson, and true freshman walk-on Austin Nix.

West adds: “Jones is Arkansas’ fifth transfer addition of the year, joining quarterbacks Ben Hicks (SMU) and Nick Starkel (Texas A&M), running back Trelon Smith (Arizona State), and kicker Jared Sackett (UTSA). Both Hicks and Starkel are immediately eligible for the 2019 season as grad-transfers, while Smith and Sackett must sit out before becoming eligible to play starting in 2020.”

For his size, Luke Jones can move.

Make sure to check out his nimble feet from those title-winning days at Pulaski Academy in the below highlights package. Try not to let the strange hip-hop undertones of the Notre Dame hype video distract you: