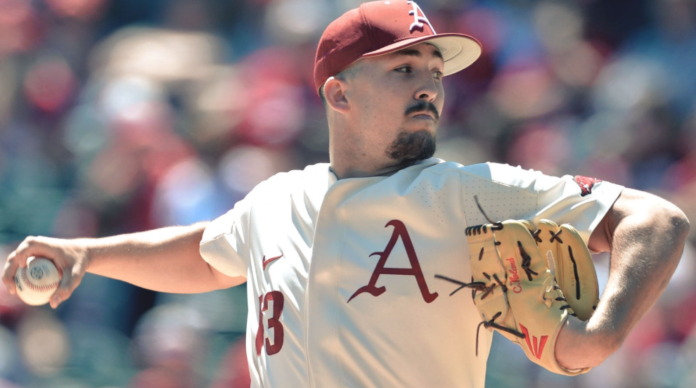 The baseball honors are starting to roll in for Arkansas’ dual-sport freshman Connor Noland.

After his best game yet as a Razorback, the Greenwood native was honored with the SEC Co-Freshman of the Week title. In front of a frenzied crowd at Baum-Walker Stadium, Noland led the Razorbacks to a sweep of the No. 2 Mississippi State Bulldogs.

“I’ve been waiting for that moment — going 7 and 2/3 innings — for a long time. That’s what you dream about, going out there [with] your peak performance and do what you want to do,” he said after the game.

Connor Noland had not pitched past the fifth inning in 10 previous starts. He said he enjoyed finally having a breakthrough: “It’s been a good week. I got my first win on Tuesday. That was a feel-good moment. Then to come out here and get another win today, that’s a really big deal for me — for my confidence, really.”

Arkansas baseball coach Dave Van Horn praised him afterward: “I’ve said all along that he’s mature for being a freshman college. His mental makeup is advanced over some kids his age — maybe a lot — that we coach. It’s one reason why liked him right when he got in here and started working with us.”

“We felt like he’d have a chance to  pitch on the weekend, because of the mental part of it. Physically, he’s already there. Now he just needs experience. But you did see the mature part of him come out this whole week leading up today, and he got rewarded for it.”

This weekend’s pitching breakthrough, coupled with the depth at quarterback that the Hogs have built this offseason, reopens the question of whether he should quit football to focus on baseball.

Noland starred as both a quarterback and pitcher for Greenwood High, but he did not excel as a quarterback during his true freshman season in college football last fall. He completed 21 of 42 passes for 255 yards, a touchdown and two interceptions in four appearances.

While the two starting quarterbacks from last season have transferred away, two experienced quarterbacks in Ben Hicks and Nick Starkel have transferred in. Hicks, of course, played three seasons under Hogs football coach Chad Morris at SMU and started the red-white game this spring. Starkel, who flashed brilliance at times as Texas A&M’s quarterback, projects to get minutes this fall as well. On top of that, there’s dual-threat freshman phenom K.J. Jefferson set to arrive this summer.

If Starkel and Jefferson are as good as advertised, then the answer at this point is “no.” Some of the reason here is that Noland “was extremely limited during spring football devoting the majority of his time to baseball. Some have speculated him splitting the two sports this spring has hampered his growth in baseball,” as Razorback insider Otis Kirk writes for Pig Trail Nation.

Plenty of major college quarterbacks have shown the ability to excel in both football and baseball. Charlie Ward, Russel Wilson, Jameis Winston and Kyler Murray are headliners in this group. All of them got major minutes playing quarterback, but of this group only Winston pitched in college. (Winston pitched only his freshman year, while Ward was drafted as an MLB pitcher despite not playing college baseball.)

It’s rare, however, for a high major quarterback/pitcher to stick with both sports through multiple seasons while sitting on the bench as a quarterback.

Don’t get me wrong: Connor Noland should do as he pleases. If he keeps enjoying the hustle of playing both sports, he should by all means persist. But if, come fall, he finds himself as the football fourth-stringer or worse, nobody should begrudge him for deciding to focus on baseball.

So far, his future appears much brighter there.

The No. 2 Mississippi State Bulldogs strolled into its weekend series at No. 10 Arkansas as the SEC’s top hitting team with a .327 average, which was also the second-highest average in the country.

They limped out of Baum-Walker Stadium bruised, battered and thoroughly beaten.

In a rousing three-game sweep, Razorback pitchers kept the Bulldogs muzzled all weekend, limiting them to just 10 runs on 17 hits and a .173 team batting average. The Bulldogs’ leading hitter Jake Mangum was held to only two hits in the series. All three of Arkansas’ starting pitchers held the Bulldogs to two runs or less and struck out five or more.

And, on Saturday, it was a freshman’s show. Behind a career-long outing by pitcher Connor Noland, the Hogs trounced Mississippi State 10-2 in front of a delirious crowd of more than 11,000 people. “I just went out there with the mindset that I was gonna try to dominate them,” Noland said afterward.

After struggling a wee bit in the first inning where he left two aboard (but nobody scored), Noland retired 10 of the next 11 batters he faced. He allowed just a single by Gunner Halter in the third inning. Noland went on to pitch into the eighth inning before Jacob Kostyshock took over with two outs. He finished the game with 11 groundball outs and no extra-base hits allowed.

The near-capacity crowd rose from their seats on the perfect Saturday spring day to give Noland a standing ovation as he left the mound. “I was feeling good,” he said afterward. “Honestly, I think I could have closed the game if I had needed to. I had some juice left to go.”

“I’ve been waiting for that moment — going 7 and 2/3 innings — for a long time. That’s what you dream about, going out there [with] your peak performance and do what you want to do.”

Noland had not pitched the fifth inning in 10 previous starts. He said he enjoyed finally having a breakthrough: “It’s been a good week. I got my first win on Tuesday. That was a feel-good moment. Then to come out here and get another win today, that’s a really big deal for me — for my confidence, really.”

Razorback baseball coach Dave Van Horn praised Noland: I’ve said all along that he’s mature for being a freshman in college. His mental makeup is advanced over some kids his age — maybe a lot — that we coach. It’s one reason why liked him right when he got in here and started working with us. We felt like he’d have a chance to pitch on the weekend, because of the mental part of it. Physically, he’s already there. Now he just needs experience. But you did see the mature part of him come out this whole week leading up today, and he got rewarded for it.”

Razorback Baseball Does Damage On Offense, Too

Seven Razorbacks had at least one hit in Saturday’s game. Casey Martin, Jordan McFarland and Jacob Nesbit each came away with two hits. Jacob Nesbit got the Hogs on board first in the 5th inning:

He finished 2-for-4 with four RBIs, three coming off a home run in the sixth to make it 7-0. “I was just looking for a pitch I could handle,” Nesbit recalled. “He threw me a fastball on the first pitch of the at bat that kind of sawed off my hands little bit. He threw me a fastball again on the next pitch and I didn’t miss it that time.” That was Nesbit’s second home run of the year as two of his three hits in the series came in today’s game.

“Playing in front of these fans, we definitely have an advantage,” Jacob Nesbit added. “Especially when you have 11,000 people who come out. It’s super fun to play in this atmosphere.”

Junior Jordan McFarland played well, too. With Heston Kjerstad having to serve a one-game suspension due to his ejection on Friday, McFarland got the start at DH and Matt Goodheart moved to right field. McFarland responded well with the spot start, going 2-for-3 with two runs scored and an RBI. He scored the game’s first run.

“Just a great job by our team, obviously, all three days coming out and really playing solid baseball and putting together some really good innings, offensively. Today, the story was Connor Noland. I mean, he was just lights outs. He had his two-seamer going, sinking. He wasn’t overpowering, 90 miles an hour. Most of his pitches were right at 90 and then he had a really good slider. He mixed in some changeups to some lefties. But he kind of went with the harder breaking pitch today and just did a super job.”

“Great job all weekend. I’m just proud of these guys. It’s been a good week. We had that tough game last Saturday at Vandy after a tough 3-2 loss on Friday and then we fought back and won Sunday. You can see how it kind of turns things. We did Tuesday and then won three more games. We’ve won five in a row. Just a really good job by our team mentally to stay strong last weekend and it led to this great week we had.” –

Coach (Dave) Van Horn says the SEC is kind of like a league like no other. Rankings don’t matter so much, like we saw last year.  We got swept by them in Starkville and we were ranked top five and they weren’t ranked at all.  So, anybody can beat anybody on any given day.  Thats just kind of baseball in general. Anytime you can sweep anybody in the SEC that’s something you want to do.”

“I’ve been waiting for that moment for a long time. Going seven and two-thirds innings, I mean that’s what you dream about, going out there and performing well at your peak performance. That was a big thing and just happy it happened.” – Connor Noland on having a career day on the mound

BTW, I love seeing Canaan Sandy make the first pitch after bouncing back from some recent, scary medical issues:

Arkansas, which now sits at No. 1 in the SEC West, will also play at home next Tuesday and Wednesday. Its foe will be Northwestern State in a two-game series.

The Hogs’ next SEC opponent is Tennessee, which ain’t half bad.

They are off to the – Best start in school history and have achieved their first 30-win season since 2014.

Jacob Nesbit said the Razorbacks will savor the sweep for a little bit, and then get back to work. “It’s definitely a great feeling, but there’s so much more work to do. It’s like rinse and repeat. We’ve got a great team coming in here next weekend in Tennessee, and we got to take care of it.”