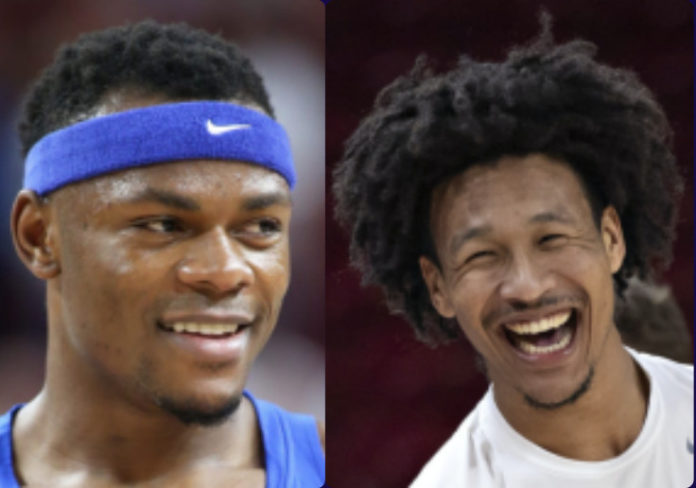 Wednesday, however, yielded a bit of a bummer, even if it didn’t happen directly to the Razorbacks.

Kentucky big man Oscar Tshiebwe announced his return to Kentucky for the 2022-23 season, his senior year. Tshiebwe was a consensus first-team All-American who averaged 17.4 points and 15.1 rebounds for the Wildcats this past season. His return takes Kentucky from a team expected to be in the Top 20 when the regular-season begins to a team that could very likely open the season at No 1. Indeed, since Tschiebwe’s return the Kentucky basketball program has risen above that of Arkansas in some major “too-early” polls.

The downfall of John Calipari, so readily heralded in some circles following Kentucky basketball’s stunning March Madness loss to No. 15 seed St. Peter’s, appears to have been prematurely called.

How does any of this affect Arkansas? Well, the Razorbacks have their own front-court star on whom they’re waiting. Jaylin Williams was the breakout player for the Hogs this year, showing an expanded offensive game in the second semester and watching his name go from NBA draft afterthought to almost-certain second-round pick. Incidentally, that’s the same round Tshiebwe would have been taken had he chosen to leave Kentucky a season early. The only difference is the Wildcats’ big man was a borderline selection. Williams, while not quite a lock to be drafted, much more of a lock to land somewhere in the second round.

Gary Parrish, long-time college basketball writer and analyst with CBS, figures there is one reason in particular the nation’s leading rebounder returned to Big Blue: the NIL.

“I don’t think there’s any doubt that that is what has happened with Oscar Tshiebwe here,” Parrish said recently on CBS Sports HQ. “He’s not a perfect, or even a great NBA prospect, though he is a terrific college basketball player.”

Arkansas’ fans are hoping Williams chooses the same path. After the loss of All-American guard JD Notae, swingman Stanley Umude and Mr. Defense Au’Diese Toney, Williams would be the face of the Razorbacks program in 2022-23. With three five-star recruits joining him and the return of guard Devo Davis, as well, hopes are high for a third straight Elite Eight, if not more, next year.

As some Arkansas basketball fans see it, the pitch to say for Jaylin Williams is strong: He can make his bank now, get another NIL deal or two, further develop his craft under coach Eric Musselman, help the Hogs win a national title, then ply his trade amongst the professionals, where, of course, after all that, he’d surely be a first-round pick and make even more money.

Never mind that scenario would include every possible thing going right for Arkansas; it also works under the assumption that Williams’ stock is infinite. Even as it stands, were he to come back, he’d be the fourth-best NBA prospect on his college team. Incoming guard Nick Smith Jr. is a likely top-five pick and could be a No. 1 overall. Swingman Jordan Walsh has the athletic freakishness and length to be a borderline lottery pick and newly-signed guard Anthony Black is likely first-rounder. And while it’s easy to dismiss those projections as ‘too early,’ the projections about Williams’ future are also, then.

It would be unusual for Williams to make the similar money with an NIL deal, or NIL deals, at Arkansas as he would being a second-round pick in the NBA. Consider Dallas Mavericks guard Jalen Brunson, who is having the equivalent of an Williams-esque kind of breakout on the NBA level in 2022.

Brunson was a national champion with Villanova and a national Player-of-the-Year-type who was taken with pick No. 33 (for the record, some draft projections have Williams going around that area, too). His first NBA deal was for more than $1.5 million a season for four seasons. No one is paying Jaylin Williams that kind of money to hawk automobiles or insurance or sporting goods.

Regardless of the decision Williams makes, Kentucky will be a force with which to be reckoned. J-Will in the fold means Arkansas has the horses up front to slow down, if not totally counter Kentucky (consider Tshiebwe had 30 points and 20 boards against the Razorbacks a couple months ago). Arkansas without Williams will roll with Kamani Johnson and Trevon Brazile, at the 4-spot and Makhi Mitchell and Markhel Mitchell at the 5. They are good players, but that foursome isn’t likely to make any Top-Frontcourt-In-The-SEC lists.

The reality is that the NIL changes the outlook on players like Tshiebwe, but less significantly for players like Williams. It will, over time, keep good college players in college longer, but won’t have an effect on those few, proud and elite who have the goods to take their games to the highest possible level. That means it won’t likely matter much this time next year, if Black, Smith and Walsh fulfill their potential as mid-to-high first round picks. The money they can make from going that high in the draft doesn’t compare with what the NIL could bring.

Oscar Tshiebwe will very likely net a seven-figure NIL ($2 million according to Jeff Goodman), which is in the range of what he he would make as a second-round pick. Williams wouldn’t get such a number from an NIL, but he also has a great chance of turning himself into a higher selection, too.

All of that is the equivalent of putting the cart in front of the horse, though. What is known, what is guaranteed, is Arkansas and Kentucky just became a lot more interesting next year. And if Williams returns, the next domino falls and Hogs-versus-Cats could feel a lot like 1994 again. CBS currently has Kentucky ranked as the No. 2 team in the nation next year and Arkansas as the No. 5, though that’s with Williams’ projected return.

On Kentucky, Parrish wrote: Wildcats’ ranking is based on CBS Sports National Player of the Year Oscar Tshiebwe returning to school alongside fellow starters Sahvir Wheeler and Keion Brooks, the latter of whom has declared for the NBA Draft but is maintaining his college eligibility. The loss of Shaedon Sharpe was a blow to the roster — but an expected one considering he’s a projected top-10 pick.”

When discussing the Razorbacks, Parrish praises the talent of the newcomers joining the likes of Williams and Devo Davis: “Eric Musselman will add three 5-star prospects to that core and have a group good enough to get Arkansas back to the Final Four for the first time since 1995.”

So, while Williams’ return remains up in the air, Tshiebwe’s return is a lock and, per usual, Kentucky will be one of the most alternately hyped and scrutinized teams in the country. The NBA was likely not in the cards, at least, not in the way most prospective professionals would have preferred it. Parrish had some advice for Kentucky’s center after the decision was announced. Turns out, it could be applicable to Williams, too. Just swap the word “Kentucky” for “Arkansas” and Arkansas fans would likely feel the same way:

“When you’re contrasting that with being the face of college basketball at a blue blood program like Kentucky, with the ability to profit from name, image and likeness rights,” Parris said, “to me, it’s a pretty easy choice.”

For more on Arkansas and Kentucky basketball, hear Holt’s take starting at 4:54: