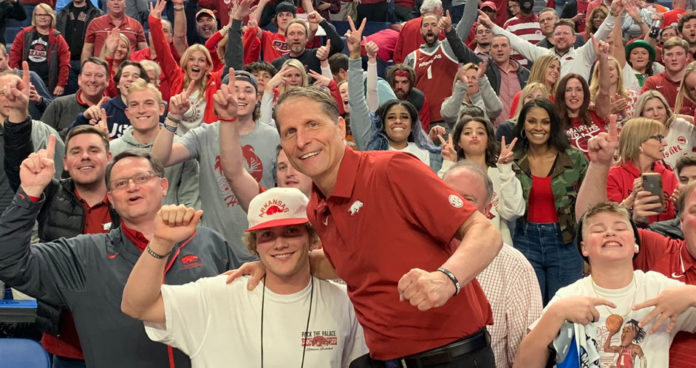 “Easy” is overrated. “Easy” doesn’t push you. Or me. Or, most importantly for the purposes of this web site, Arkansas basketball.

Arkansas never has an easy go of things in the NCAA Tournament. Even in 1995, when the Hogs made the national title game a year after winning it, the Hogs needed every single bit of energy, much like they did Thursday night in their first-round win over Vermont.

That Razorbacks team from 27 years ago beat 15th-seeded Texas Southern by just a point in the first round. They needed overtime in the Round of 32 and the Sweet 16, as well. Against the Catamounts on Thursday, things weren’t quite that close, but Arkansas was only ahead by more than six points for one meaningful moment in the whole game. Vermont immediately countered Arkansas’ nine-point edge at the beginning of the second half with a 12-0 run.

It wasn’t until a desperation 3-pointer in the final 10 seconds fell short that the fourth-seeded Hogs could take full breaths. They advanced, 75-71, to play 12-seed New Mexico State on Saturday at 7:40 pm. The Aggies beat fifth-seeded Connecticut just before Arkansas and Vermont tipped. Earlier in the day, 12-seed Richmond upset No. 5 Iowa, too.

Then, of course, there was 2-seed Kentucky’s loss to No. 15 seed St. Peter’s shortly before the Hogs’ game tipped off:

It’s the worst NCAA Tournament defeat in the long history of Arkansas’ chief basketball rival and further exposes John Calipari as a fraud who has worn out his welcome in Lexington. Granted, it would cost UK some $44.025 million to remove Calipari without cause. But that doesn’t preclude an internal investigation being launched to find violations to serve as said cause.

It’s enough to have some calling for Calipari’s head. Now, we see Kentucky coaching hot boards emerging like mold spores across the Internet and radio waves. Predictably, a coach as good as Eric Musselman will make appearances on such spores like the one below, just as his name was brought up last year with openings at Indiana, Texas and Arizona:

Don’t expect Musselman to go anywhere soon, even if his buyout plummets from $7.5 million to $2 million when the 2021-22 season ends.  He’s spent too much time building a program on the cusp of greatness that will soon add the nation’s No. 2 recruiting class.

“I kind of know what’s going to happen. We all do. We all know they’re going to be upsets,” he said. “Watching those games earlier today didn’t really affect my mentality at all. Matter of fact, I used part of our pre-game, just talked about how much respect we had to have for Vermont.”

Consider, too, Arkansas didn’t exactly blast its way through non-conference opponents during the season. The Hogs were undefeated through their first nine games, all against foes from outside the SEC. But only the last three – wins against Central Arkansas, Little Rock and Charlotte – could be deemed ‘comfortable.’ The others required late runs to get double-digit victories. Vermont was better than anyone Arkansas faced during that early portion of the schedule.

That experience, plus the experience of making an Elite Eight run a year ago, certainly helped. One of the Razorbacks’ best players during the 2021 NCAA Tournament, Devo Davis, was excellent again, especially in the first half, against Vermont, scoring 14 points. Then of those came in the opening 20 minutes.

Let’s not overlook the contributions of a grown man making his first NCAA Tournament appearance. Senior Stanley Umude, who played his previous seasons with South Dakota, had a team-high 21 points. His 3-pointer with 6:46 left turned Arkansas’ three-point lead into six. The Catamounts only came that close once more, in the waning seconds, before the Hogs put the game away from the free-throw line.

Musselman knew Davis, JD Notae and Jaylin Williams – three players who all participated in last year’s run – would be ready on Thursday. He was curious about Umude, if only for a short while. When he saw the USD transfer pre-game, Musselman’s mind was settled.

“It was interesting, before the game he was kind of non-emotional. Laser-focused,” Musselman sid. “We just have one locker room so I would kind of pop in from the hallway. Couple guys had their phones. We don’t collect the phones until 90 minutes before tip off. He wasn’t one that had a phone. He was staring right at the video screen as we had Vermont film rolling.”

The Hogs don’t have much time to ready for Arkansas vs New Mexico State, though it helps the coaches saw the entire UConn game sitting court-side. But no one else does with their opponent next round, either. Musselman and the Hogs will play with what brought them to this point. Namely, a tough mentality. Davis figured the brighter the lights, the more he and his teammates will step up to meet the challenge.

“The bright lights,” he said. “We all need to step up at some point. I think the team and I know when it’s time to play, you win, you advance.”

The bracket suggests another Elite Eight, or deeper, run could be in the books. New Mexico State is good, but far from infallible. The Aggies lost to Utah Valley, Stephen F. Austin and Chicago State this season. Unquestionably, this is a more favorable matchup than UConn (at least on paper), but that doesn’t mean any lesser degree of intensity is warranted.

And Musselman and the Hogs aren’t taking anything for granted.

“When we saw our name on Sunday in the tournament, we came here to win,” Eric Musselman said. “We expected to win the game. WE expected it to be a hard-fought game. WE’ll go into that same mentality Saturday. Fear nobody. Respect everybody.”

Likewise, when it comes to Musselman’s coaching in the next year or two, Arkansas basketball fans should fear nobody. Musselman has too good of a thing brewing with the Razorbacks to let the bright lights of Lexington distract from the task at hand – following in those ’95 Hogs’ footsteps all the way to the national championship game.

Evin Demirel contributed to this piece

Plenty of commentary on the Hogs and fall of Kentucky basketball here: