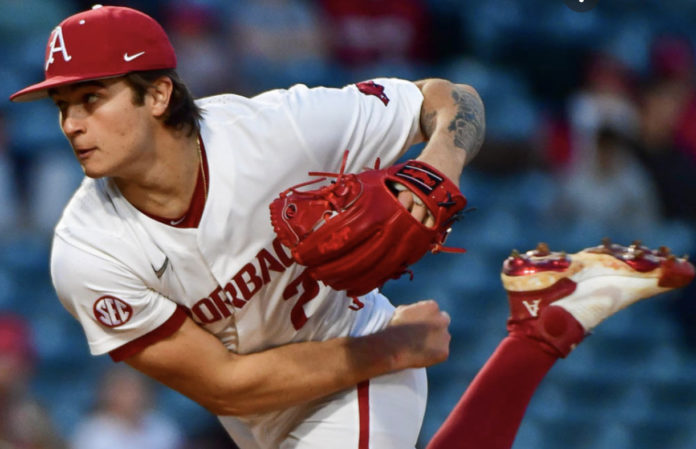 Once again, Arkansas baseball coach Dave Van Horn’s charges are hovering around the top of the best conference in college baseball deep into the season. Halfway through the conference season, the Diamond Hogs sit atop the SEC West with the exact same conference record as this time last year. Tennessee’s incredible start with only one conference loss puts Arkansas second in the overall SEC race. Arkansas’s baseball program has been elevated to a consistent, top tier program that is a perennial contender for not only SEC championships but also Omaha and chasing that elusive national championship.

A huge factor in the Razorbacks’ steady success has been the ability to “next man up” the closer position. A laundry list of schools have a generational talent show up that is thrust into the closer role and owns it. Mississippi State’s Landon Sims from last year’s national championship team comes to mind. But there would be a big gap between Sims and the last Bulldog closer that was a lock-down, this-game-is-over “dude”.

Arkansas Pitchers Through the Years

Somehow, Arkansas seems to come up with one guy after another who has a knack for shutting down opponents and holding those precious late leads. Modern day baseball has labeled these “high leverage” situations where the outcome of the game hangs in the balance. Kevin Kopps’ 2021 campaign is arguably the greatest single season ever by a college pitcher. His Golden Spikes Award worthy season may never be topped. It was that good.

As good as Kopps was in 2021, he wouldn’t be considered the best closer in Razorback history over a career. That title would belong to hard-throwing submariner Phillip Stidham who made 105 appearances over three seasons with a high of 36 in 1989 and 1991. Stidham boasted a 1.62 career ERA and saved 33 games during his tenure. Stidham’s success came in the old Southwest Conference with the 1989 team going to Omaha and 1989 and 1990 both winning the SWC. Not bad for a converted shortstop who couldn’t hit.

Other notable closers in Arkansas’s recent history include Matt Cronin, Zach Jackson, Barrett Astin and Colby Suggs. Cronin is the single season saves leader with 14 in 2018. Astin was incredibly effective all three seasons he was on campus and pitched in the big leagues with the Reds. In 2013, Suggs had 13 saves (10 in SEC play) to set the record prior to Cronin’s 2018 season. Jackson was incredibly effective in the closer role in the 2015 run to Omaha and just landed on the Oakland A’s big league roster.

Need for a Razorback Closer

So 2022 rolls around and a big question mark headed into the season was who is going to be that guy at the back end of ball games. There was no obvious choice as the Hogs didn’t go out and get any contributors from the junior college ranks. Possible closer Jaxon Wiggins was elevated to a weekend starters role after ace Peyton Pallette went down with an elbow injury.

There were some veterans returning in Kole Ramage, Elijah Trest and Zebulon Vermillion who had a lot of big game experience but have not consistently shown lockdown type stuff or the mentality to be that guy. Somewhat by default, Ramage got the ball late in some of the early games but faltered a few times (in the early season loss to Southeastern Louisiana for example) which sent pitching coach Matt Hobbs and DVH scrambling to find a solution.

Typically freshman, especially at a top tier program like Arkansas, wouldn’t be considered for such an important role. Most aren’t ready from the maturity and mental aspect. Wiggins’ attempt at closing games as a freshman early last season would be a case in point. Despite a big league fastball, velocity wise, he was unable generate enough confidence with the coaching staff to stick in that crucial responsibility to hold late leads.

That played a big role in the legend of Kevin Kopps beginning.

With Ramage struggling in early 2022 in the closer role, Van Horn rolled the dice on a freshman as highly regarded as a third baseman as much as he was as a pitcher. Now at the midpoint in the 2022 SEC race, Tygart has possibly emerged as the best closer in the SEC. Blake Burkhalter of Auburn has 8 saves to lead the SEC but has an ERA over 3.00 and 17 appearances. Tygart, meanwhile, has made 11 appearances, all in relief with a 1-1 record and 5 saves supported by a rock solid ERA of 1.74. Perfect Game has named him a mid season freshman All American.

He’s even become a Twitter sensation as the Pitching Ninja routinely features his wicked breaking pitch which has generated a lot of swing and miss from talented SEC hitters:

I was able to witness Tygart firsthand this past weekend against LSU’s vaunted lineup. Sitting behind home plate, there is no question about the electricity of Tygart’s stuff. Although his breaking ball gets all the hype, he consistently locates a sizzling 92-94 MPH fastball that has great tilt and movement.

For those unfamiliar with the term “tilt” in relation to pitching, a pitcher wants a fastball that changes planes from the pitcher’s hand to the catcher’s mitt. The more tilt the pitch has, the harder it is for the hitter to barrel the baseball. Flat fastballs, regardless of how hard they are thrown, get annihilated in major college baseball and the pros alike. And that tilt helps disguise the breaking ball as it looks like a fastball out of the hand and then darts to the bottom of the strike zone.

Despite being just a freshman, Brady Tygart has emerged as the slam-the-door closer not only because of his “stuff” but also his ability to handle the big moments. His only falter thus far was in a Sunday loss to Florida when, in a tie game in the late innings, he reverted back to his third baseman days and tried a Brooks Robinson-esque attempt to field a bunt and rifled it into right field. That opened the door for Florida to score two runs in the late innings off Tygart and secure the series.  Otherwise, he has been nothing short of dominant.

Even this past Saturday in the finale against LSU, it was apparent he didn’t have his best stuff and he didn’t appear to be in the same attack mode we’ve seen (likely because he wasn’t “on”). But he still got the job done for his second save of the series and locked up the sweep. That is extremely rare for a freshman and should be a HUGE confidence boost for him and the team going forward. Once a young pitcher figures out he can still get the job done without his best arsenal, look out. The combination of hard-to-hit stuff and a rising confidence level can put a pitcher on the path to being nearly unbeatable.

There is a lot of baseball left for the Razorbacks in 2022 and Tygart is going to play a huge role in just how long the party lasts. The Hogs are positioned to be a postseason host and a likely national seed unless they have a catastrophic second half of the SEC season. Starting pitching has been very dependable as has middle relief from lefty Evan Taylor and Vermillion from the right side. With those guys bridging the gap between the starters and Tygart, the Razorbacks have the pieces to keep themselves in games from here on out.

The stretch run will be interesting as more scouting reports within the league emerge on Tygart. Teams tried everything under the sun to get to Kopps with rare success. Will hitters start laying off Tygart’s breaking ball until he shows he can throw it in the zone? Will they try to change his pace and rhythm to try and get in his head? What about when he pitches in front of a really rowdy crowd on the road down the season’s homestretch? Can he stand up to performing at this level throughout an entire season of those high leverage situations?

These are all valid questions that any coach would have in the back of their mind with a freshman closer. But if he is able to keep this up, it wouldn’t be the first time. Stidhman (1989) and Astin (2011) were both freshman All-Americans in the closer role. Some guys are just wired differently and those two handled the role effectively. I actually played with Stidham so I had firsthand knowledge of his makeup and what made him great. He was truly unflappable and a fiery competitor that truly believed his stuff was more than any hitter could handle. That’s a key ingredient for anybody in the closer role. Even if it isn’t, a pitcher has to believe that or they will melt under the pressure.

Coach Van Horn has said the same about Tygart. He wants the ball. Tygart wants to be in the big moment. Thus far, he’s handled the role with the same aplomb as Stidham, Cronin, Kopps and the like. Tygart has all the makings of being in the conversation with those guys.

Hitters don’t like facing him. He makes them uncomfortable with a high velocity moving fastball and a hard biting breaking ball that he appears to be able to throw in any count. Coupling the pitching arsenal with his mental edge and it looks like Arkansas has a very legit go-to guy at the end of games. The 2022 stretch run will determine if he’s cut from the same cloth as those previous menacing Arkansas baseball closers.

From what he’s shown thus far, I’m bullish on Tygart.