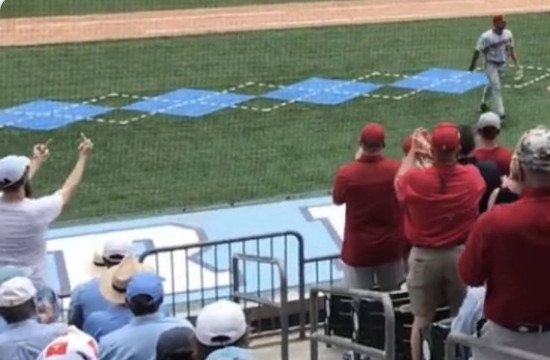 That seemed downright boring, didn’t it?

OK, not boring per se. Familiar. Arkansas’ 4-1 win over North Carolina in Game 1 of the Chapel Hill Super Regional was straight-forward. After the madness of the last several weeks, especially the last two weeks, both on and off the field, something about Saturday’s victory over the 10th-seeded Tar Heels felt quaint.

A tumultuous end to the regular season and in the SEC Tournament saw the Diamond Hogs go 4-6 in their last 10, then two-and-out in Hoover, Alabama, eliminating any chance the Razorbacks had to earn a national seed despite being ranked inside the Top 10 for practically the entire season. Throw in the Michael Turner saga and the most ridiculous regional in the history of college baseball and Arkansas needed some room to breathe.

They can officially exhale, just one win away from the College World Series. A victory on Sunday would clinch that spot in Omaha. It would be the third CWS appearance in the last four seasons for Arkansas baseball and the ninth in coach Dave Van Horn’s 20 seasons at the helm.

Familiarity and contempt, of course. That old chestnut. Last year’s Game 1 win in the Super Regional round was a 21-2 Arkansas victory. In that opener, the Wolfpack looked like a considerably weaker foe than the Cornhuskers with whom the Hogs had battled the previous round.

A bulk of this year’s team was on last year’s roster. They well remember any lessons about not taking anything for granted from that fateful weekend.

Arkansas was in the same spot last year, as a Game 1 victory over North Carolina State had the Hogs on the doorstep of clinching a third straight CWS trip. It didn’t take. The Wolfpack shocked the country, not only winning the Supers after losing that first game, but coming within a hair of making the national championship. COVID-19 was all that stopped NC State from getting that chance as Vanderbilt won a win-or-go-home game via walkover when the Pack couldn’t field enough players.

Still stinging from the Super Regional loss, the Razorbacks could only sit and watch the College World Series, wondering what they may have done there as the top-ranked team in the country all season long. So they came out with a purpose in 2022, staying ranked inside the Top 10 practically the length of the year before the chaotic ending. The adversity, though, appeared to bolster the Diamond Hogs. In crunch time, which was practically the whole of the Stillwater Regional and earlier today, Arkansas looked fantastic. They looked like a Razorbacks team made of sterner stuff.

Namely, the bats, which were a moderate weakness for Arkansas all season long, are awakened. The Stillwater Regional was the highest-scoring regional of all-time. Then, in Game 1 vs UNC, the Diamond Hogs had another 14 base-runners. And the clutch factor isn’t coming from just one or two sticks in the lineup, either. Eight of the nine starters reached against North Carolina. Peyton Stovall, a highly-touted freshman whose first year in the SEC yielded the lowest slugging percentage of Arkansas’ regulars, went yard to open the scoring.

Connor Noland Comes Through in Crunch

Pitching is where the Razorbacks made their hay through much of the season, though. Connor Noland tossed a gem in the opener of the Supers, working 6 2/3 innings and giving up just six hits while striking out six.

“I thought both teams pitched extremely well,” Dave Van Horn said afterward. “Connor got into a jam in the first, got out of it. After that, he settled in. The next three innings were pretty smooth…. I think he started mixing a lot better. When he started mixing, they probably started trying to hit some kind of breaking ball. He was throwing a couple different ones. He started throwing his fastball a little bit. I thought he did a great job, and Michael [Turner] called a great game.”

Noland won’t be available whatsoever on Sunday and his availability for any potential Monday games would be minimal, at best, leaving Van Horn some decisions.

Hagen Smith, who was a weekend starter for most of the season, closed out Saturday’s win. Jaxon Wiggins has gone just 1 1/3 innings in each of his last two starts. Will McEntire went 2 1/3 against Alabama in the SEC Tournament the last time out. And Zack Morris, the only other player to start a game over the last three weeks for the Diamond Hogs, tossed 3 1/3 against Oklahoma State in the clincher.

And that’s the kicker. Arkansas doesn’t have the starting pitching it normally does, at least outside of Noland’s reliability. But Van Horn has the luxury of a bullpen that is role-less. He mixes and matches arms between starting and relieving and in different spots in the game. It’s more gut than defined roles. And who doesn’t trust Van Horn’s gut?

Besides, who needs drama? Sound, direct results save a lot of heartburn and heartache. Arkansas has had plenty of the former over the last month.

For most part, it escaped Saturday without anything approaching controversy. But a few hours after the game, Pig Trail Nation’s Mike Irwin Tweeted out the following:

This, apparently, was taken at the end of the game as Arkansas baseball fans cheered their team off the field. One North Carolina fan, as you can see, wasn’t so pleased.

An opposing fan doing something like isn’t shocking. Nobody, after all, likes to see other teams come onto your field and win. And sometimes fans do this after their team wins. Here at Best of Arkansas Sports, we criticized Arkansas fans who just a few months ago in Fayetteville flipped off Tennessee basketball players as they walked off the floor in defeat.

A lot of Arkansas fans think Irwin is going way too far in suggesting that this fan be banned for his single hot-headed moment. “Like this doesn’t happen at every other school in the nation, including Arkansas,” wrote KB’s burner. And Josh Teeter weighed in: “Don’t come into the hog pen or student section.”

The main difference between Arkansas and North Carolina baseball, however, is that Tar Heels play in the best manicured pillbox east of the Mississippi. Far fewer fans overall means that any rogue fan like this will, theoretically, stand out more than in a bigger stadium like Baum.

The fact that is even an issue getting discussed on social media underlines how little spiciness actually occurred on the field in Game 1. Again, not a bad thing. Boring is fine. Standard is fine. The usual is fine. After all, this is Arkansas baseball, not the Roc Riggio or Tony Vitello Show. Eight CWS appearances in 19 years is the usual and an incredible rate.

Stick with the usual.

See our latest on Arkansas vs North Carolina here: