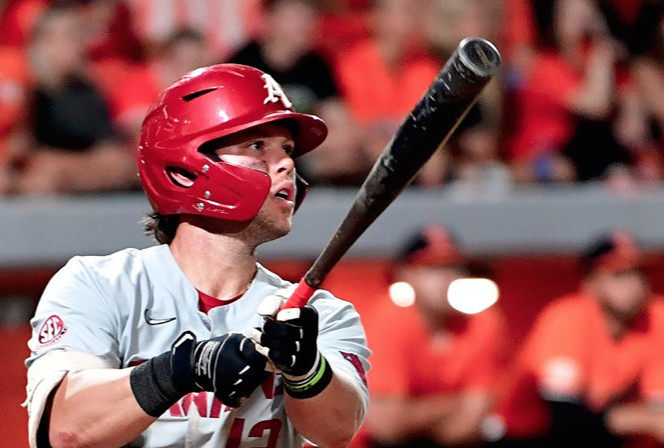 A common refrain amongst the loudest and most brash fans, especially of teams that aren’t the most popular in the country – for our purposes, let’s say Arkansas fans – is that nationally they don’t get the respect and recognition they deserve.

That generally isn’t the case with the Diamond Hogs. The Arkansas baseball program has been one of the country’s best five or 10 teams for a better part of the last 20 years. Not coincidentally, Dave Van Horn has been running the program since 2003. The Razorbacks added to their lore over the weekend when they wrapped up the Stillwater Regional with a 7-3 win over Oklahoma State, lifting themselves to a fourth straight Super Regional round of the NCAA Tournament where they’ll travel to Chapel Hill to play No. 10 North Carolina.

But outside the historic scoring output the four teams in Stillwater registered, a more personal story took the forefront. At the conclusion of Monday night, Arkansas catcher Michael Turner was named the regional’s MVP. Turner, the transfer from Kent State in his first and only season with the Diamond Hogs, put together an 8-for-18 weekend with two walks, two home runs, a double and nine RBI plus another seven runs.

Turner didn’t need a redemption, per se. He was Arkansas’ second-leading hitter during the regular season and earned some consideration for All-SEC honors at the end of the regular season. But outside of the Southeastern Conference, he was relatively unknown. Four years at Kent State kept him largely off the mainstream radar and Arkansas’ lack of even a single player on the postseason All-SEC clubs meant the usual Diamond Hogs star-power was somewhat lacking, at least, when it comes to that national recognition.

Stepping Up for Arkansas Baseball

Only those not paying attention locally, however, were unaware of what Turner brought to the team. He stepped into an Arkansas lineup replacing one of the program’s best all-time defensive catchers and an icon at the position for Razorbacks history in Casey Opitz. The proverbially big shoes were big to fill, but he did it with aplomb.

Unfortunately, Turner took an unnecessary blow toward the end of Arkansas’ regular season as the Diamond Hogs limped to the finish line, going 4-6 in their last 10 games ahead of the SEC Tournament and subsequently going two-and-out while in Hoover. Turner was asked about the team’s struggles upon that exit and pointed to – you guessed it – the loud and brash Twitterati. Local radio host Derek Ruscin took major umbrage.

Arkansas didn’t have a game from Monday, May 30, until they opened play against Grand Canyon in the Stillwater Regional on Friday, June 3. Turner didn’t stew. He prepared. His Regional weekend would have been impressive under normal circumstances. But the loud-and-brash received what they wanted in the week leading up to the Regional: college baseball was talking about the Razorbacks.

They still are; now, at least, in the way Arkansas faithful would prefer.

Ruscin apologized for his remarks, which, as he admitted, were overly harsh. He also made a good point about just how truly awful the opinion was.

“Lost in all of that bluster, name-calling – which was wrong – buried in there was a terrible sports take. None of the things I said about Michael Turner are true. You can’t get where he gets and be the things I said,” Ruscin said.

It remains to be seen whether sports-talk radio listeners across the Natural State will forgive Ruscin, or, at least, how long it will take for them to do so. He’s been suspended indefinitely. But the good news for Razorbacks faithful is that some in the fan base are taking the negative and turning it into a positive.

Stoerner, the former Arkansas quarterback in the late 1990s, knows a thing or two about being ragged on by fans. His fumble against Tennessee in 1998 remains stapled, heart-breakingly, in the minds of Arkansas Nation. There was no social media at the time, but memory serves: a contingent of takes about Stoerner at the time were that the Hogs’ loss in the game against then-No. 1 Tennessee was exclusively the quarterback’s fault (it wasn’t). The Vols went on to win the national championship. Stoerner received some measure of absolution the next season when he led Arkansas over the defending national champions and then to a Cotton Bowl win over hated rival Texas.

Baseball isn’t football at the University of Arkansas, but it’s closed the gap in the last decade. Fayetteville loves its Diamond Hogs as much as any town loves its college baseball team. As such, with all the drama of the last week playing as context, Turner very well may have cemented his place as not only a talking-point when reminiscing about Arkansas sports for the next 20 years, but also his place as an Arkansas baseball legend.

Not bad for a single season in the cardinal red.

It’s a season, by the way, that isn’t over yet. For long stretches this season, it seemed like this Razorback team didn’t have the same kind of fiery leadership that the last one did. That’s no longer the case as Turner has taken the fore as the kind of emotional leader Arkansas needed through in-game ups and downs. With what transpired in the last 10 days, would anyone really be surprised if Turner and his teammates kept catching postseason fire?

Michael Turner makes a massive amount of lemonade out of lemons with this announcement: