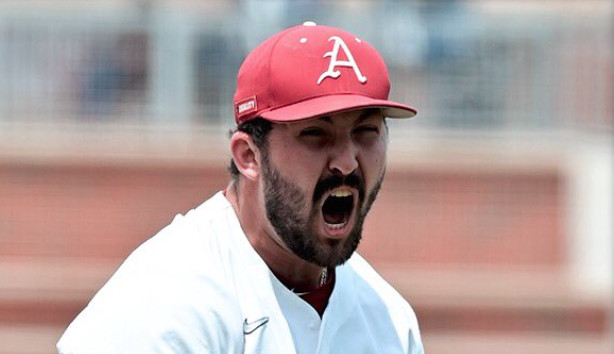 Arkansas baseball standout Connor Noland’s Razorback athletic career really has something for everyone, and not just within the athletic department.

The theater department could get some mileage out of the right-hander’s star-crossed tenure, too. The ups, which certainly include Friday afternoon, and downs have been numerous across the years since the Greenwood native stepped onto campus in 2018. At first, Noland made a name for himself as a potential savior at quarterback and on the mound. Like a lot of strong-armed guys, Noland could throw fly routes and fastballs in high school.

But rare is the example of the same athlete excelling at both. Certainly, we’ve seen baseball-football combo players over the years, yet save for onetime Dallas Cowboy and Stanford Cardinal Chad Hutchinson, the inventory of true pitcher-QB success stories is pretty short.

Noland, though, represented a four-star quarterbacking prospect who just happened to have great velocity and mechanics for a teen. In 2018, the demands placed on him in the former spot were too great, and under the absolute worst possible circumstances.

Namely, his arrival coincided with that of Chad Morris. And that, invariably, led to him having to play in games like this one, which would sour anyone on the sport.

Obviously, that’ll savage your plans of collegiate football stardom. So right out of the gate, Noland shelved his two-sport endeavor, and he committed to baseball fully.

In 2019, he thrived on the bump as a freshman All-American and SEC All-Freshman team member. His 2020 started off brilliantly (2-0, 0.35 after three starts), but COVID-19 stalled the season, and arm troubles in 2021 negated his effectiveness in limited availability.

Now he’s the seasoned vet of this mercurial 2022 team, and as Arkansas tries to reverse a stagnant month of play, it’ll require more of Noland’s presence and resiliency. Friday was a great start.

Noland gave up six hits, only one earned run, three walks and struck out four in seven innings to lead Arkansas to a 7-1 win against Grand Canyon in the opener of the 2022 NCAA Tournament’s Stillwater Regional. He also got hit twice by line drives off Grand Canyon bats, but both times was able to retrieve the balls and throw the hitter out at first.

“I’ve never seen that happen in baseball where a pitcher got hit twice in one inning and threw the runner out,” Noland said afterward. “The fact it happened to me makes me feel really special.” No doubt, at least one of those blasts has left a bruise on Noland’s body. But at least it provided some good comedic fodder among the creative types on Twitter:

While Arkansas baseball fans were concerned about Arkansas’ quick ouster from the SEC Tournament late last week, the extra days of rest appear to have helped a lot. Noland, for one, appeared much sharper after his performance had dropped in recent weeks.

On April 7 at Florida, Noland validated Dave Van Horn’s decision to make him the Friday night starter. He threw seven sparkling innings of one-hit baseball against a formidable Gator lineup, striking out seven in an 8-1 win.

He had a pair of double-digit strikeout games before that, too, and had a 5-1 record and 2.60 ERA after that victory. In some ways, that represented the peak of the Hogs’ season, too.

The Razorbacks pushed their overall mark to 23-5 and a stout 8-2 in SEC play. From there, though, Arkansas struggled primarily at the plate, but also lost its edge on Fridays.

Before Grand Canyon, Noland had failed to notch a victory since, though he has inarguably pitched well at times the past eight weeks. But the demarcation of that Florida game (and series, since Arkansas turned around and dropped two straight at Gainesville) is obvious.

The senior pitcher was 0-4 with an ERA well over 5.00 in that span, and the Hogs similarly fizzled, 15-13 and 10-10 thereafter. Noland served up two longballs in a shaky start against the Gators in the elimination game in Hoover, dropping to 5-5 overall with a 4.07 ERA.

It was an alarming enough trend that veteran sportscaster Mike Irwin called attention to it prior to the conference tourney. “He’s gone backwards,” Irwin said a few weeks ago. “And you know it’s not character, or anything like that: he’s a great guy. It really hurts me to see this happening to him. I want to be able to say good things, that he’s going to bounce back and all this, but I just don’t know.”

Finishing With a Flourish Will Change Noland’s Narrative

When the Hogs faltered down the stretch, the hopes of hosting postseason baseball at Baum-Walker nosedived, too. Accordingly, they opened NCAA tourney play, for the first time since 2015, as a visiting team.

That 2015 team, ironically, went to none other than Stillwater, Oklahoma. And they bested the host Oklahoma State Cowboys as the second seed, earning them the rare chance to host a Super Regional.

Led by Golden Spikes winner Andrew Benintendi, the ’15 Hogs are a great model for this squad to follow for obvious reasons. They overcame a slightly erratic regular season and made it all the way to Omaha.

That was Van Horn’s fourth trip as Hog coach to the CWS, and if he wants to make a seventh, Noland’s right arm is critical. There’s perhaps a sense that the team can breathe easier now.

And Van Horn loves to lean on experienced arms in June. Last year, Kevin Kopps ably filled that role all year, and before that, guys like Isaiah Campbell, Blaine Knight, and D.J. Baxendale turned themselves into aces through toil.

Noland’s been that steadying veteran presence on a youthful staff, as expected and hoped for. Despite the recent struggles, he still leads the squad in strikeouts (95) and innings (86.1). The workhorse also earned All-SEC Defensive Team honors, and notably, his walk ratio is the lowest of his career.

Some players spent recent days lamenting the vocal, angry minority of Hog fans who gave up on this team. Noland, as ever, maintained a quiet, composed approach, even as his family took undeserved grief. Irwin mentioned, for instance, that some fans had been Tweeting nasty messages to Noland’s mom, attacking him.

The quiet, steady approach is what Arkansas needs to reverse its fortunes in Stillwater and, hopefully, beyond. For good cause, Noland’s poise and grit made him the leader of this talented staff that may just be catching fire at the right time.