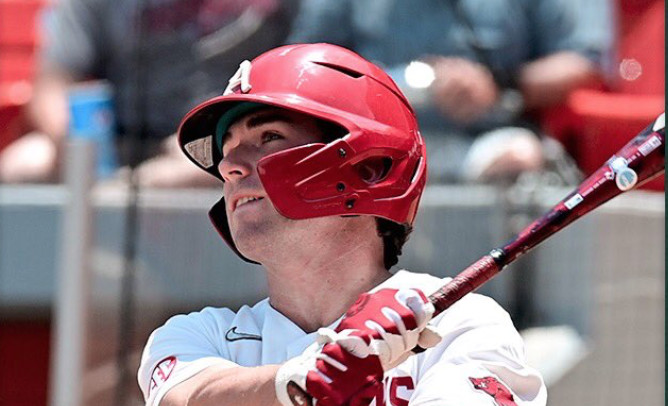 After a disappointing end to the regular season and an 0-2 outing at the SEC tournament, the Arkansas baseball team (39-18, 19-12) started its with a bang, routing Grand Canyon 7-1 in the opener of the Stillwater Regional.

Over the previous eight games, Arkansas had been 2-6 including losses in the last four contests and had struggled to score.  The Hogs started to rectify things in a hurry on Friday afternoon, scoring five runs over the first two innings of play. Next up is the host and No. 1 seed Oklahoma State, which beat Missouri State 10-5 on Friday night.

Both teams impressed in their openers, but the Cowboys should be especially wary of an Arkansas baseball team that has as much talent as any team in the nation and may be reawakening to play closer to its vast potential.

Cayden Wallace, who hit two homers on the day, got things rolling with two outs in the bottom of the first as he blasted an 0-1 pitch over the wall in left center to put Arkansas up, 1-0. “It was a fastball – looked like it was knee high – and he crushed it,” Van Horn said afterward. “I mean, I don’t know if you can hit a ball harder than that. It was a no-doubter right when it left the bat. I’m going to say it was about 450 feet.”

Arkansas continued to tee off on Grand Canyon starter Daniel Avitia, scoring four more in the bottom of the second to open a five-run advantage. The Hogs’ offensive outburst came with two outs and included two RBI singles as well as a bases-loaded hit-by-pitch.

GCU’s Avitia, the Western Athletic Conference Pitcher of the Year and Freshman of the Year, lasted just 1 2/3 innings while allowing five runs on four hits and three walks.

Wallace took Lopes reliever Blake Reilly yard in the bottom of the fourth, swatting his second home run of the day over the wall in left once again. The Greenbrier, Ark., native finished the game with two hits and three RBI, recording his third career two-homer game in the Razorbacks’ win.

Although his batting average over that 14-game stretch has dipped slightly compared to the first 43 games of the season — .283 compared to .304 — his power numbers have increased dramatically.

As Hawgbeat’s Andrew Hutchinson notes, “Although his batting average over that 14-game stretch has dipped slightly compared to the first 43 games of the season — .283 compared to .304 — his power numbers have increased dramatically.”

Wallace and Turner’s big afternoon backed Connor Noland’s spectacular start on the mound. The Hogs’ ace twirled seven innings of one-run ball with four strikeouts to earn his sixth win of the season and card his team-leading eighth quality start of the year. He also produced this gem:

Kole Ramage was the only other pitcher Arkansas used in the ballgame as he emerged from the bullpen to secure Friday’s result. The right-hander struck out three over two scoreless innings and preserved the Hogs’ 7-1 win.

Looking at Arkansas vs Oklahoma State

The Cowboys had an impressive season where they only lost three weekend series and finished as runner-ups in the Big 12 Tournament. They also have series victories over Vanderbilt, Oklahoma and a sweep at Texas.

As good as they were, Oklahoma State was not unbeatable at home. All three series losses came in Stillwater and the Cowboys got swept at home by Gonzaga and Texas Tech.

Despite the few mishaps, Oklahoma State was very good all season and they had a good lineup to carry them through the year.

Heading into Friday, the Oklahoma State baseball batting average sat at .289 while the Cowboys slugged 80 home runs and scored 7.2 runs per game.

The offense is led by senior left fielder Jake Thompson with a .349 batting average, 14 home runs, 62 RBIs and a team-high 1.077 OPS. Freshman right fielder Zach Ehrhard is right behind with a .335 average to go with 17 stolen bases.

Sophomore third baseman Nolan McLean and senior designated hitter Griffin Doersching help lead the slugging department. McLean hit .272 with 14 home runs, 40 RBIs and a .910 OPS. Doersching only appeared in 37 games but mashed 13 home runs and 49 RBIs with a .287 average and a team-high slugging percentage of .662 to give him a 1.067 OPS.

The starting pitching is not a bright spot of Oklahoma State but there are a few really good arms in the bullpen.

Sophomore Justin Campbell has been the best starter for the Cowboys with a 3.43 ERA and 133 strikeouts over 94.1 innings. Sophomore Ryan Bogusz and junior Roman Phansalkar have been reliable in relief. Bogusz has a 1.69 ERA over 32 innings and Phansalkar made 26 appearances and pitched to a 2.44 ERA over 51.2  innings.

How to Watch Arkansas vs Oklahoma State

There is a path for Arkansas to the Super Regional through Stillwater. It is a tough region and the Razorbacks will need to display their hearts and grit to advance. The way this season has gone, the Hogs will not make it easy on themselves. They will carve out the toughest path possible.

Arkansas vs Oklahoma State could go a lot of different directions. Arkansas could run out of arms with this being the fifth game of the weekend, or just run out of gas all around. Oklahoma State will be very hard to beat twice at home.

Dave Van Horn knows how to win in June, so through optimism and faith in DVH, the Razorbacks get it done on Monday and drag themselves through the gauntlet into Chapel Hill – or possibly Fayetteville should a lower seed win that Regional.

The below published before Friday:

The other possible game two opponent would be Missouri State. The Bears are the last team to send Arkansas home in the Regionals back in 2017 and own a victory over the Hogs this season. The Bears also have a victory over Missouri and dominated Kansas on two separate occasions.

It was a rocky season for Missouri State, but they rallied at the right time and won their conference tournament from the 6-seed. Going into the conference tournament, they were 25-26 but went 5-1, beating 1-seed Southern Illinois twice to capture an automatic bid into the NCAA Tournament.

Offense was not the problem for the Bears. They hit .291 as a team and launched an impressive 99 home runs and scored 7.6 runs per game. They captured the 6-4 victory in Fayetteville in early May as well.

Senior right fielder Dakota Kotowski mashed the ball all year for the Bears, leading the team with 23 home runs and driving in 50 runs with a .955 OPS. Senior second baseman Mason Hull helped with the slugging, as he hit .281 with 14 home runs, 48 RBIs and a .926 OPS.

The pitching for Missouri State should not be much of an issue. The best starter, senior Adam Link, has a 4.50 ERA with 68 strikeouts over 86 innings. There may be one wild card however. Senior Ty Buckner has not allowed a run over his 13.1 innings of work, mostly coming in May.

This Regional is strong but has cracks where Arkansas can make it through to the Super Regional with the winner of the Chapel Hill Regional.

Grand Canyon has experience this year playing some of the best teams. However, their dominance was in a smaller conference and they have not had to sustain success against top level teams for 10 weekends straight. This battle experience could be the edge Arkansas needs and prove Grand Canyon isn’t the giant killer they appear to be. However, GCU may prove to be Arkansas’ toughest competition in the region.

Oklahoma State has been ranked highly most of the season. However, they have not finished the year in an unconquerable fashion. The Cowboys are 12-9 in the past 21 games, including two series losses at home and a sweep of Texas in Austin. There are cracks in the armor of the Stillwater hosts and Arkansas is in a similar boat. The regional could come down to who puts it all back together better.

Missouri State has had the recent last laughs at the Razorbacks’ expense with the 2017 regional victory and the win earlier this year, but the Bears have not had a great season. They had a losing record going into their conference tournament. They are a tough team, but very beatable. The Bears may have the opportunity to put the final nails in the coffin for the Arkansas season again, but Arkansas will not go down without a fight.

The Razorbacks have not finished the year well, but at their peak are one of the best baseball teams in the country. They arguably are the best and most talented team in the regional, but have underperformed.

They will need to get back on track if they hope to escape a tough regional. There is a path to victory for them even if they are not playing at their best. The competition is stiff but beatable.

There is always the probability the team just comes together and plays their best baseball of the year. An Arkansas team clicking on all cylinders can beat any and every team in college baseball.

The Stillwater Regional has a lot of questions and variables going into it and soon they will all be answered.

“When you get to this point in the season, if you haven’t finished well and you get in, you’re just glad that the regular season is behind you,” Van Horn said. “You did enough work to go to a regional and hope you can get back a little bit of that confidence and get back to where you were playing better.”