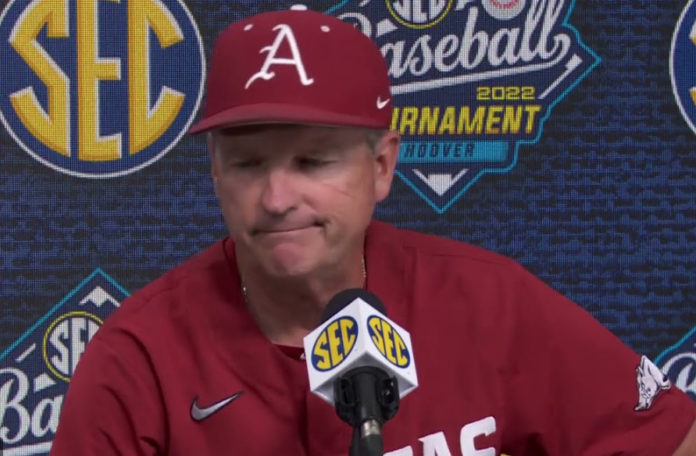 The line of demarcation was 18 wins. It was supposed to be all but a lock. In fact, in the last 20 years of SEC baseball, only four of the 68 Southeastern Conference baseball teams who reached 18 league wins failed to host an NCAA Tournament Regional. After the NCAA Division I Baseball Committee’s announcement earlier this week, Arkansas baseball can now lay claim to joining the club with two of those four teams.

The Razorbacks were, unsurprisingly, sent on the road for the first four-team mini tournament of the grander NCAAs. Arkansas will be the No. 2-seed in the Stillwater Regional, coincidentally, the same college town where the Diamond Hogs last had to play on the road in the Regional round. In 2015, Arkansas went to Stillwater, dispatched Oral Roberts, the host Cowboys and then St. John’s to go 3-0 and march back to Fayetteville, where, as luck would have it, the Hogs hosted a Super Regional. A College World Series appearance would follow.

In that 2015 season – yes, that’s the Andrew Benintendi season, if you recall – Arkansas went 17-12 in SEC play. This year’s bunch was a game better. The biggest difference between the two teams, though (star-power notwithstanding) was their flipped results. The Benintendi-led Razorbacks had an atrocious March. A 9-0 shutout to Loyola Marymount started a six-game skid that saw a sweep at the hands of Gonzaga and Vanderbilt. Southeast Missouri State would take one of two in Fayetteville the next week, LSU would take two of three, Memphis earned a split and Missouri State (can you say, ‘foreshadowing?’) shut out the Razorbacks in the month’s finale. Dour was the state.

Somehow, the 2022 season feels worse. It isn’t actually worse, mind you. But recency bias is a very real thing. Throw in the off-field drama around Michael Turner’s comment last Friday and excitement isn’t exactly brimming. It’s rather unfair, too. Arkansas is in the midst of a four-game losing streak and hasn’t won consecutive games since April 30 and May 1 against an Ole Miss team that snuck into the postseason. Series losses to Vanderbilt and Alabama capped the regular season, though neither was a sweep, and a two-and-out in Hoover for the SEC Tournament  further dampened spirits.

No one, accordingly, expected Fayetteville to be announced as a host site on Sunday when the 16 were announced. In the 24 hours leading up to selection day, the smart money lay on Oklahoma State and Texas, prognosticators knowing full well the NCAA’s propensity to keep teams relatively close to their home base when they can afford it. Lo and behold, to the surprise of none, Oklahoma State it is. OSU, Arkansas, Grand Canyon and Missouri State will christen O’Brate Stadium for its first postseason experience after being built just 15 months ago.

On paper, the Regional appears to be a blast. Sure, Oklahoma State is a good team, as the 10th-rated RPI can attest. But they’re also a team that lost 20 games and has the overall third-worst winning percentage of the top 18 teams in the RPI. They’re a team that was swept by Gonzaga and Texas Tech and also fell to Dallas Baptist, Oral Roberts and Sam Houston. While none of those last three losses are anything about which to embarrassed, the point stands:

Has anything that’s happened to Arkansas, on the field, any less ignominious than that? Not a single team swept the Diamond Hogs this year. In fact, until the last two days of the regular season, Arkansas had only been beaten in back-to-back games just a single time. That time happened to come against Florida, a team that’s also hosting a Regional in Gainesville. The Gators, who carry of 12, were a modest surprise host, at least entering the SEC Tournament. A 15-15 regular season record was bolstered by their appearance in the championship game.

Auburn vs Arkansas Baseball in Hosting

In all, NCAA Division I Baseball Committee chose four SEC schools to serve as hosts, showcasing that the league’s best conference again had some might at the top. One of those hosts, Auburn, actually fell to Arkansas in two of three games during the regular season. In fact, it was in May, during Arkansas baseball’s last solid run. Some, like Pig Trail Nation’s Mike Irwin, didn’t believe the Tigers deserved to host:

It’s a debatable point, certainly. But Auburn’s 14th-ranked RPI fit exactly where the Tigers are seeded. The RPI had come under fire, especially in Arkansas, during a bulk of the season. But the Tigers still won 16 games during conference play and took a series from Vanderbilt and Texas A&M, one of the aforementioned host schools.

Still, Irwin’s point is valid: Arkansas beat Auburn not too long ago. And Auburn “finished fifth in the overall standings in the SEC, fifth. Do the standings not matter? Do you come up with these dopey metrics that mean more than how you played? Give me a break,” Mike Irwin railed against the NCAA’s baseball selection committee on a recent “Ask Mike.”

Since that Auburn series win, more than a few more dark clouds for the Razorbacks have gathered. The lack of fervor, relatively speaking, about Arkansas baseball the week of the NCAA Tournament is the biggest disappointment. Not anything the Razorbacks themselves have done. Sometimes the baseball gods conspire. Simple as that. The reality is Arkansas baseball, what with six players ranked inside the Top 150 college players eligible for this summer’s MLB Draft, cearly have the talent.

They have the firepower. They have Dave Van Horn. They have a shot to turn their backing-into-a-corner into a rampage through the postseason. Heaven only knows what the locker room has been like since the return from Hoover and all the exterior goings-on. It’s all but guaranteed, however, that it’s galvanized. Arkansas’ baseball players are going to do what they can for themselves. Trust they want a national championship or, heck, even a respectable showing even more than you do. Far, far more than you do.

So why not Stillwater? With everything else wacky that’s happened over the last three weeks of the season, what wouldn’t another wacky outcome be on the table? Only, this time, given the melancholy surrounding outside expectations for Arkansas in Stillwater, that wackiness would come by way of a Diamond Hogs win.

More from Mike Irwin vs the NCAA Selection Committee

As Irwin sees it, the NCAA’s baseball selection committee messed up even more egregiously in other conferences when it comes to allowing teams finishing lower in conference rankings to host:

“In the Big 12, TCU won the regular season championship, they don’t host but Texas does and Texas finished fifth. First [place] doesn’t host, fifth place team does, explain that. Oklahoma finished ahead of Texas in the regular season and beat them in the Big 12 tournament, Texas host’s, OU doesn’t. What are you doing there guys?… I had one of these national baseball guys that got on and said it’s metrics, it’s metrics. Well that’s a fancy word for we’ve created something that we think is really cool and it’s really stupid.”

Irwin was only heating up at this point. He continued: “Let me explain something. When high school has it figured out more than you do at this level, you are stupid. Here’s what happens in the [Arkansas Activities Association’s] 7A West: I think they take the first three teams, it might be up to four now, but I know they took the first three teams… If you finish first, second or third, you go into the playoffs. Where do you play? Whether you play at home or go on the road is determined by finishing first, second and third.

“So it’s cut and dry, there’s not some bunch of guys in a room bringing in tacos and stuff and having smoking cigars and just throwing it up against the wall and going, yeah, let’s do this.”

Bask in Irwin’s anti-NCAA ire in its glorious entirety starting at 12:30 here: