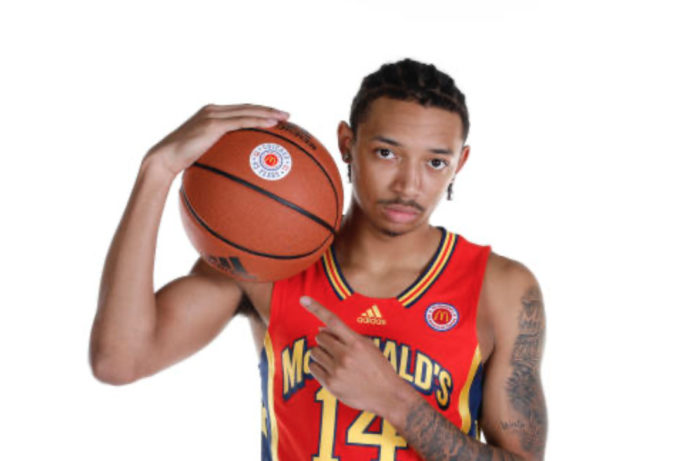 Not since Corliss Williamson has a freshman come into the Arkansas basketball program with as much anticipation and acclaim as Nick Smith Jr. The Little Rock area native skyrocketed up the high school basketball recruit rankings over the last couple years, ultimately ending up as No. 1 in the nation in the class of 2022, according to 247Sports.com.

“When the great Eric Bossi [247Sports recruiting analyst] told me that I was going to be No. 1, it was kind of weird, I ain’t going to lie,” Smith Jr. recently said on Pig Trail Nation. “Coming from sophomore [year], I was in the 50s/60s range, then being a top player in my class all of a sudden my senior year, just to see how the work – all the blood, sweat and tears – I put in.”

“At the end of the day, I still got to get better each and every day, come in college-ready, compete in practice.”

As Smith and the rest of his high-touted freshman classmates step onto campus in the coming days, the Razorbacks will be gunning for a No. 1 that matters far more than anything a recruiting service can offer.

For Corliss Williamson, it took two seasons. An injury his freshman season dampened his impact a bit, but with the help of fellow freshman Scotty Thurman the Hogs still made the 1993 Sweet Sixteen. The next season, though, they won it all.

Nick Smith Jr. and fellow five-star Razorbacks like Anthony Black and Jordan Walsh probably won’t have two shots at the ultimate prize. All three are forecasted to leave as one-and-dones with Nick Smith Jr. a consensus projected lottery pick in the 2023 NBA Draft among major mock draft outlets.

So, in a way, it’s now or never for the phenom who averaged 26.5 points, 8 rebounds and 7.3 assists last season while helping lead North Little Rock to a second straight state title.

He relishes the challenge ahead. “Arkansas ain’t been to the Final Four in a long time [since 1995],” Smith told Pig Trail Nation’s Kevin McPherson. “That’s something I want to get to, because I feel like if I get to the Final Four, there’s no way I’m going to let us lose.”

That’s some ironclad confidence right there. The same kind you need to become the first Arkansan to ever win MVP of the Jordan Brand Classic, as Smith did in April:

In that game, Smith scored 27 points while shooting 7 of 13 from the field, 5 of 7 from beyond the three-point line and making all 8 free-throw line attempts. He threw in 3 rebounds and 4 assists for good measure, showing an ability to raise his game even as the level of competition rises.

It’s also worth noting that the Jordan Brand Classic came after the McDonald’s All-American Game, a contest where Smith did not score as efficiently, missing all five three-pointers. Playing with a lot of the same elite ballers in the 2022 class as he would in the Jordan Brand Classic, Smith also had a rough time going to the hoop, scoring a total of 8 points.

“His finishing around the basket genuinely concerned me, though,” wrote No Ceiling’s Maxwell Baumbach. “He’s shown nice craft at the youth level, and he did get a few tough ones to fall, but the length and athleticism of the game gave him fits when he got to the cup.”

Baumbach, who watched the McDonald’s game live, continued: “I also noted that he didn’t get up as well in traffic as he did in the open court. I’m definitely cooler on Smith coming out than I was going in, but these are all adjustments he can make in time; it’s not the end of the world.”

Smith’s ability to bounce back from a pedestrian performance with an MVP effort against similar competition certainly played a role in his No. 1 ranking by 247Sports. This kind of resilience also bodes well for Arkansas basketball should it return to the deeper rounds of March Madness.

Nick Smith Jr on What Comes Next

“On a big stage, for some reason, I always play well. Just trying to get there, man,” Smith said on Pig Trail Nation. “But at the end of the day, nothing is guaranteed, nothing is promised, we got to go in and work for it. There’s other good teams out here that want the same thing, we have to be different. We have to buy to what Coach Muss has for us, because he’s one of the – if not the best – coach in the country in college basketball. So, we just have to go in and buy-in to the team and buy-in to what we have on that team.”

One of Smith’s teammates on an absolutely loaded Razorback backcourt will be Devo Davis, who grew up in the same north Pulaski County area in Jacksonville and is two two years older. Whether it was playing against Davis while growing up, and often losing, or various games around the house, Nick Smith Jr. always kept his competitive instincts sharp.

“It starts in the house, there’s five people in here always doing something competitive. It was either we playing a game, it was either we playing one-on-one on the official practice goal. We’ll be trying to see who gets to the door fast, just little stuff like that, man. It’s always being around that type of environment.”

“I really hate to lose. I just want to go out there and give it my all. If I lose and I know we give it our all, I’ll be fine with that, I would be fine with losing. But at the end of the day, if I feel like if I lost and I know I didn’t really give it all I had or my team to give it all they had, I’m going to be pretty upset.”

Arkansas basketball fans are probably going to feel a bit upset to find out that ESPN has dropped the Hogs from No. 1 in their preseason rankings to No. 6 (one spot behind Creighton[!]) because of JD Notae and Au’Diese Toney leaving for the NBA. Jaylin Williams is also likely to announce he is staying in the 2022 NBA Draft.

ESPN’s ranking came out before the arrival of new transfer Ricky Council IV, however. The sports columnist at The Stanford Daily, however, believes that Council and the rest of the new transfers, along Smith and the freshmen, make Arkansas No. 1 at this point in the preseason.

“Even without Williams, this team has length and athleticism at all positions on the court and is likely the deepest team in college basketball going into next year,” Kaushik Sampath wrote. “The players’ skill sets complement each other well, as this team has elite distributors, scorers and versatile defensive players. The roster, combined with head coach Eric Musselman’s ability to coach defense, make me believe that by the end of the year, this will be the best team in college basketball.”

Even with Jaylin Williams gone, still expect Arkansas to be one of the two the two most likely SEC teams to win the 2023 NCAA Championship when looking at odds for the 2022-23 NCAA basketball season.

To win it all, however, teams generally need alpha scorers. Corliss Williamson filled that role to a tee in his sophomore year, providing go-to buckets again and again from the post.

Nick Smith Jr. should fulfill the same leading role soon. Smith may not score a point off a post-up all season, but he won’t need to given the devastating arsenal of NBA-ready face-up moves and shots from all ranges he has at his disposal. The below footage, from a recent practice, hints at a level of skill and athleticism that should terrify future opponents:

Looking ahead toward the 2022-23 postseason, there will be a few times where everything is on line for the Razorbacks. In those pressure-packed moments, there will be no question about where Arkansas should go first for a bucket.