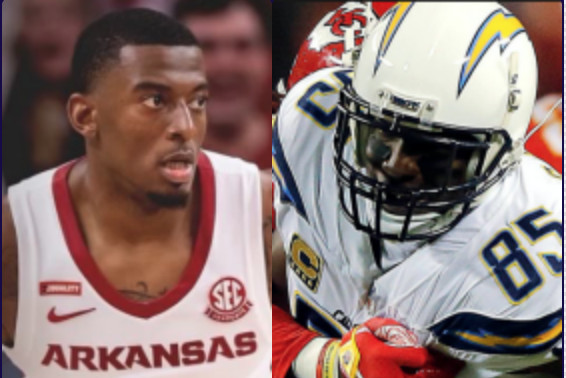 This college basketball power forward conversion to NFL tight end trend all started with Antonio Gates. Gates has a couple of Arkansas connections and unfortunately is one of the reasons why Hogs fans got stuck with former Arkansas basketball coach Stan Heath.

In the late 1990s, Gates was a standout two-sport prep star in Detroit. He enrolled at Michigan State because then-Spartans head coach Nick Saban promised him he could play both sports. Later, the legendary current Alabama coach reneged on the promise and Gates decided he’d rather play basketball and transferred to Kent State.

At the mid-major program in Ohio, he starred as an undersized power forward for former Sparty assistant Heath, who worked under the great Tom Izzo. Gates’ stellar play in the NCAA Tournament along with star point guard Trevor Huffman’s propelled the Golden Flashes to the Elite 8 and made Heath, in his only year as a head coach, a target for the late UA athletic director Frank Broyles after firing Nolan Richardson.

Gates made a great decision and Broyles a bad one. Gates knew he wasn’t big enough to play NBA power forward, but he figured he could polish off his football skills and give the NFL a try. The result was a Hall of Fame career with then San Diego Chargers where he was able to mentor former Arkansas All-American tight end Hunter Henry before he retired.

Although he had previously worn No. 86 with Los Angeles, Henry announced last spring that he would wear No. 85 with New England as a tribute to his former Chargers teammate.

“Obviously I played with one of the great ’85s’ to ever play the game and one of the best tight ends to play the game in Antonio Gates,” Henry said. “So maybe it’s a little slight honor to him, and hopefully I can do the number right for him.”

Antonio Gates succeeded at the next level, but the same could not be said of his college coach. Unfortunately, Broyles hired Heath, and it was the beginning of nearly two decades of bad or mediocre Arkansas basketball until Arkansas athletic director Hunter Yurachek had the brilliant idea of hiring Eric Musselman. Two Elite Eight runs in three years have Hogs fan ecstatic with one of the top recruiting classes in the country about to converge on the campus this summer.

One of the smart transfer portal moves Musselman has made in his three was sighing Wichita State senior power forward Trey Wade, a 6-foot-6, 220-pound banger. Wade’s final season of college hoops wasn’t spectacular, but he will be known by Hogs faithful for two things. One is his collision with Musselman in practice, which resulted in injuring the Arkansas basketball coach’s rotator cuff keeping him from coaching for a brief period and in a sling for several weeks.

His performance against Gonzaga in the Sweet 16 game in the NCAA Tournament also won’t be soon forgotten. He scored 15 points and was 3-of-4 from the free-throw line with seven rebounds. His 3-pointer with 16:35 to play in the game gave Arkansas a lead they never relinquished. Wade, who started 24 games, also hit a key jumper with 7:18 to play to cap a 7-2 run and give Arkansas an eight-point lead. Hall of Famer Dwayne Wade couldn’t help but give him a shout-out on Twitter:

But even though, his insertion into the starting lineup was key in the Hogs’ turning the season around, Wade knew as soon as he arrived in Fayetteville, he wouldn’t have a future in the NBA and maybe not even in pro basketball at all.

So, like other role-playing college basketball big small forwards or small power forwards, he began to think about the NFL. Luckily for him, his coach has some connections in the NFL. Musselman’s friend Adam Engroff, a Miami Dolphins scout, came to watch practice early in the season and Musselman pointed him out.

While Miami didn’t pick up Wade (Arizona did) that visit may have got the ball rolling. At any rate, NFL teams became familiar with Wade and his aspirations.

The one thing that is unique about his situation is he hasn’t played football since he was 12. Gates had at least played in high school and began to play at MSU. Jimmy Graham, who enjoyed some big years with the New Orleans Saints, started off at Miami playing basketball but then played football for a season with the Hurricanes and got a chance to make his mark in the NFL.

NFL scouts have become enamored with the role-playing college basketball forwards because of the size they possess, the 6-foot-5 to 6-7 range, which is ideal for a tight end and the skills that are similar such as footwork and hands. The right player can make a transition between the two sports because rugged athleticism is such a big part of the NFL tight end game. Wade checks all of those boxes.

That’s why in this offseason alone, NFL teams are looking at two other college basketball players to make the conversion to tight end – Texas Tech’s Marcus Santos-Silva and Clemson’s Naz Bohannon.

An Arkansan Who Also Made the NFL Jump

If Wade makes it in the NFL, his journey could be very similar to Jacksonville native Demetrius Harris. Harris was a two-sport stars for Jacksonville High School, which has now merged with North Pulaski. Harris signed to play football at Arkansas State but didn’t meet the academic requirements.

He enrolled in junior college in Missouri and played basketball at Wisconsin-Milwaukee. After putting up similar role-playing numbers to Wade, he signed on with the Kansas City Chiefs, who were impressed by his 6-foot-7, 237 pound frame and the fact he ran 40 yards in 4.52 seconds and had a vertical jump of 36 1/2 inches.

Harris was on the Chiefs practice squad for a season and then made the active roster.

After five years with the Chiefs, Harris played for the Cardinals last season after spending a season with Cleveland and Chicago, respectively. He’s found that his basketball background has helped in at least one regard: “From playing defense in basketball, where you’re low, it helped me getting in and out of breaks,” Harris said. “A lot of people say I run my routes like a basketball player. I don’t know what that means. I guess it’s so rare that people on defense rarely see it.”

Used mostly as a blocker, he started in three games in 2021 and played in 13 but only had two catches for seven yards.

The 30-year-old Harris may not be Gates, but he’s played professional football for eight years now and has accrued more than $11.2 million in career earnings. That in itself is an accomplishment. There’s probably plenty of other basketball hopefuls who haven’t made NFL rosters, but there are enough who have that made this a good decision for Wade. Only time will tell if he’s able to shake off the pee-wee football rust and make a career out of football, but as Wade sees it, if he doesn’t give it a shot now, he’ll always wonder what might have been.

And there are worse things than having a professional basketball career abroad to fall back on.

Hear Wade talk about his shot at the NFL here: