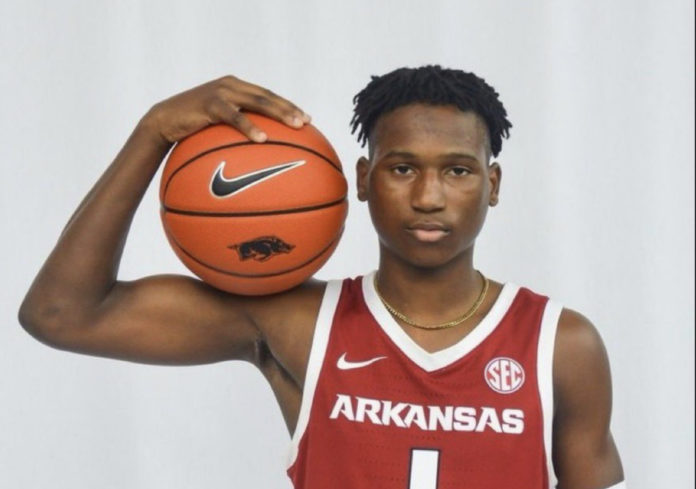 After pulling in one of the best recruiting classes in Razorback basketball history for 2022, the 2023 class now holds Eric Musselman and the Arkansas basketball staff’s full attention. Arguably the highest current priority for the Hogs in this class is Little Rock native Layden Blocker. At 6’3 and 175 pounds, Blocker currently ranks as the No. 7 point guard in the nation – No. 1 in the state of Arkansas – according to 247sports.

ESPN currently holds Blocker as the No. 28 player in the 2023 class, moving up from his previous ranking of No. 34 in the class. He is now the fourth highest four-star in ESPN’s rankings, right on the cusp of being a five-star. Don’t expect his stock to stop moving up anytime soon, either.

The rising senior has already taken a few official visits to the likes of Ole Miss, Oklahoma, and Auburn, but he has several more in his near future including an official visit date with the Razorback staff from June 6th – June 8th.

Blocker cut his list of colleges down to seven during the fall of 2021, including several top-tier basketball programs like the two most recent national champions in Baylor and Kansas along with Gonzaga, Memphis, Auburn, Oklahoma State and Arkansas.

“Arkansas made my top seven because of the relationships, environment, and coaching,” Blocker said in a recent interview. “They do a great job communicating and building a relationship to make me feel like a priority. The coaches are experienced and know the game at a high level. Their NBA experience can help to develop a player like myself to potentially be a one-and-done.”

Arkansas reportedly offered Blocker on October 7th, 2020 along with St. Johns, TCU, Oral Roberts, and others. Other top programs like Texas Tech and Creighton didn’t start offering Blocker until the spring of 2021. The early jump on Blocker’s recruiting could turn out to play into the Hogs’ favor.

“I just want a coaching staff that’s going to treat me like family,” said Blocker recently. “[I want someone to] push me on and off the court and make me not only a better basketball player, but a better man. I want to go somewhere where I can play my game and have freedom. Just really coach me. I want a college coach that’s going to coach me hard, and teach me.”

Musselman tends to be very demanding of his players defensively while allowing them to play freely on the offensive side of the ball. This philosophy lines up with Blocker’s desire to both have freedom and to be coached hard and pushed as a player. Being close to home may also help fulfill the “family” approach Blocker is looking for in his next coaching staff.

As a junior, Blocker transferred to Sunrise Christian Academy in Wichita, Kansas where he played with Gradey Dick (Kansas commit) and Mark Mitchell (Duke commit). Despite the increasing level of talent in Blocker’s teammates and opposition, he still managed to average 9.0 points, 3.8 rebounds, 3.3 assists, and 1.3 steals per game on 53% shooting from the field for Sunrise Christian.

Blocker’s ability to transition from top dog at LRCA to an important rotation player at Sunrise Christian while maintaining tangible output and impressive efficiency speaks volumes about his potential at the next level. Former Razorback guard, Khalen (KK) Robinson, successfully navigated a similar transition when he transferred from Bryant high school to Oak Hill Academy to further prepare himself for collegiate basketball. Robinson has not yet filled his full collegiate potential, but Hog fans will have a front-row seat to the junior guard’s next opportunity at Texas A&M next season.

Some players are not able to make the transition from the best player on their high school team to a role player at the next level, but Blocker has already demonstrated that he can excel in different roles during his high school transition.

Blocker has an elite combination of quickness, speed, and basketball instincts that makes him a dangerous weapon on both sides of the ball. He’s most comfortable when attacking the rim with a full head of steam, and he’s usually quick enough to get there before a help defender can attempt to block his shot or get set for a charge.

Though he is primarily a score-first attacker, Blocker’s mind is as quick as his feet on his drives, allowing him to find open teammates when help defenders are able to gain good position against his relentless attack.

One of the biggest weapons in the young guard’s arsenal is his defensive instincts. He averaged over two steals per game as a junior and 1.3 steals per game against a high level of competition –perennial powerhouse teams like IMG Academy, Oak Hill Academy, and Montverde Academy – at Sunrise Christian. He has a knack for reading the eyes and intentions of his opponents, allowing him to be a true menace in passing lanes and as a help-side defender on dribble penetration.

Perhaps Blocker’s biggest weakness is in his willingness to shoot from distance. He’s not a high-volume shooter, but has shown the ability to knock down spot-up threes – he shot roughly 41% from long range at Sunrise Christian Academy last season. More often, Blocker attempts pull-up midrange jumpers as a counter to his elite dribble-drive attack. The speedy guard is an attack-first player that prefers to get his hands dirty at the rim rather than settling for jump shots over defenders. Blocker doesn’t need a very big gap in the defense to find a hole to attack, but as his confidence in his own shooting touch develops, so will his opportunities to drive in the paint.

Though he might not possess the same blinding speed of the former Kentucky guard, Blocker holds a lot of De’Aaron Fox in his game. Fox is a fast-paced point guard that lives in the paint and knows how to finish over, around, and through defenders. The Kings guard is perhaps more of a pass-first player than Blocker is, but the similarities can be seen in their preferred style of attack – head-on.

Fox is only a 30% 3-point shooter in the NBA, and he never got above 25% in college. Blocker could ultimately surpass both of those shooting marks, but he has yet to prove to be an elite shooter. Quite frankly, he hasn’t had to with how successful he’s been at attacking the paint at the high school level.

During his time at Arkansas, Young averaged 15.2 points per game, 2.8 assists per game, and shot less than 33% from long range on less than four attempts per game. These numbers are in line with what I believe are Blocker’s potential numbers at the next level given his similar style of play. Both possess a blinding first step that will be hard to contain at any level, but Blocker’s high IQ at such a young age gives him the upper hand in terms of professional potential.

Razorback head coach Eric Musselman has more than shown his willingness to treat his roster like an NBA team and the transfer portal like free agency. After his first season in 2019-2020, coach Musselman returned only two scholarship players for the 2020-2021 season – Desi Sills and Ethan Henderson. The following season coach Musselman returned only five scholarship players on his way to a second consecutive Elite Eight appearance – JD Notae, Jaylin Williams, Devo Davis, KK Robinson and Connor Vanover. Now, in his third off-season as Head Hog, only four players from last year’s roster hold the ability to return for the 2022-23 season – Devo Davis, Kamani Johnson, Jaxson Robinson, and Jaylin Williams (testing NBA Draft).

With all the moving pieces at play, it’s very hard to predict the Razorbacks’ roster 12 months from now, but let’s try anyway.

The three five-star freshmen in the 2022 class will likely be in the NBA Draft this time next year, leaving Derrian Ford, Joseph Pinion, and Barry Dunning as the potential sophomores on the 2022-23 Arkansas basketball roster, along with Anthony Black and/or Jordan Walsh should either decide to stay. Jaxson Robinson – if he’s still on the team – has only used two years of eligibility heading into the 2022-23 season, so he currently remains an option for the 2023-24 roster. Devo Davis would be a senior in 2023-24 should he remain a Razorbacks. Jaylin Williams would also be a senior, but his growing interest from NBA scouts leads us to believe he won’t be a Hog that long even if he does return for one more season. That puts the count between five and seven players before considering the incoming transfers for 2022-23.

Trevon Brazile, the first of Arkansas’ transfers this off-season, holds three years of eligibility under his belt, making him a likely candidate for the 2023-24 roster. Makhi and Makhel Mitchell both have two years of eligibility remaining, but their interest in the NBA Draft this off-season during their transfer process makes them less likely candidates to return for a second season with the Hogs. Jalen Graham has already played three years for Arizona State. Despite retaining his COVID year of eligibility still, it would be shocking if he wore the cardinal and white for more than one season – similar to the Au’Diese Toney situation.

Assuming Brazile is the only returning transfer, that leaves the Hogs with anywhere from six to eight scholarship players before 2023 recruits. The final number depends on the decisions of incoming 2022 freshmen Black and Walsh since Nick Smith is the only 2022 Arkansas freshman widely considered to be a one-and-done at this point.

Arkansas would have either one or two point guards (Ford, Black), three guard/wings (Davis, Pinion, Robinson), and two or three wing/forwards (Dunning, Brazile, Walsh). Should his stock continue to rise like it’s expected to, Blocker could be the second straight five-star point guard to lead the team following Anthony Black (Nick Smith projects to play more of a facilitating shooting guard role this season). The door would be wide open for Blocker to join the Razorbacks and make a vital impact from day one.