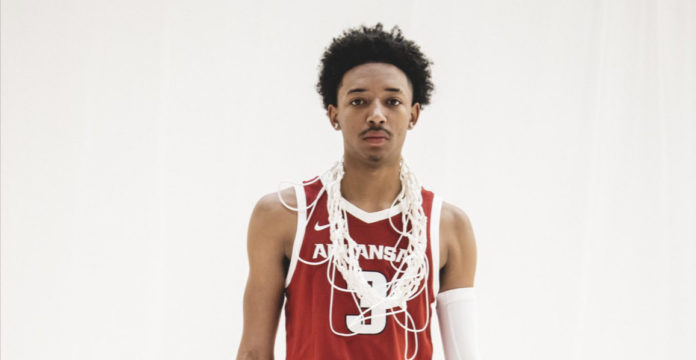 With the highest-ranked class of the recruiting ‘stars’ era set to arrive in Fayetteville for Arkansas basketball in 2022, the expectations coming off last spring’s Elite Eight appearance are sky-high. Arkansas currently has the No. 2 class in the country right behind Duke and ahead of Kansas. And it may even add another star player.

Smith and Ware could become the first Arkansas high school teammates of the same class who eventually end up as first-round picks in the NBA Draft.

In 1979-1980, Michael Cage and Keith Lee were teammates on a West Memphis team that went undefeated. Although both stars later ended up as Top 15 picks in the NBA, Cage was a year ahead of Lee. Their Blue Devils team ranks with the likes of ‘92 LR Parkview and ‘99 LR Central as the greatest in Arkansas prep basketball history.

If everything goes as planned in 2021-2022, Smith has a chance to be part of a special North Little Rock High team that joins that pantheon. The next season, as a Razorback freshman,  he will be part of the most talented Arkansas basketball team in decades.

If such a team were to reach its potential, as the less talented, scrappy 2020-2021 Razorbacks did in making the Elite Eight under Musselman’s hard-driving leadership, a Final Four appearance should be expected.

Of course, once you’re in the Final Four, it’s all eyes on the biggest prize. As the Tweet below shows, Smith isn’t shying away from these expectations:

“We’re trying to win national championships and not lose any games — that’s our goal,” Smith said when discussing the 2022-23 Arkansas basketball squad.

Smith, however, is clear-eyed enough to know that while you’re striving for perfection, your opponents are doing the exact same.

“When you come back to reality we’ve got to realize that we’re going to hit a couple of bumps in the road,” he added. “First thing is getting up there to training camp and going through real practices trying to learn Coach Muss’ system and just trying to win. We can’t really control what goes on down the road.”

Fellow 5-star combo guard Anthony Black out of Duncanville, TX has been high on the Hogs’ radar and could possibly be the final piece of the puzzle to this ’22 class. Black is the 25th overall player in the country and 3rd in Texas per the 247 Sports composite rankings.

If he indeed does give his pledge to the Hogs he figures to contribute immediately, just like Smith, since multiple seniors on the Razorbacks’ roster will depart after this season.

Smith knows Black and talks to him some. In a recent Tweet, he hinted at another big-name recruit — perhaps another blue chipper like Anthony Black — committing soon.

But as far as a college decision goes, he knows Black will make the best decision for himself: “I’m not the type of dude who would bug you just to come,” Smith said. “I want him to do what is best for him and his family just like I did. Because if it was me in that situation, I wouldn’t want anybody bugging me about it. But we do talk about the situation.”

And what a situation it is. On the whole, Razorback fans have not been this optimistic about the future of the Arkansas basketball program since the 1990s.

Here are more excerpts from my interview with Nick Smith Jr:

What was your reaction when Jordan Walsh (2022 7th-ranked player per ESPN) told you he was going to commit to Arkansas?

“I kind of already knew from the jump, I’ve been talking to him since I committed. Getting someone like him to play with me in Coach Muss’ system, it was pretty much a no-brainer for us.”

Asked about keeping in touch with his fellow home state commits (Derrian Ford & Joseph Pinion): Do you keep in pretty contact with Barry Dunning Jr.?

“I’m going to be real, I have not really been talking to Barry. I’m pretty sure when we get up there we’ll be in more contact.”

With all the talent at North Little Rock, what have you guys been doing to keep focused knowing that you will have a lot of eyes on you around the country?

“This team is very locked in, Coach [Johnny] Rice has us that way every day coming in and working hard especially for the talent we are about to play being national-level guys.” [Click here to see NLR’s very challenging schedule]

“We’re just coming in every day competing against each other and taking no days off — that’s one of the keys. We’re looking forward to the season and continuing to bond as a team.”

Make sure to watch the whole interview at Rocktownsports.com here.

Also, more evidence that Nick Smith Jr. is a baller: