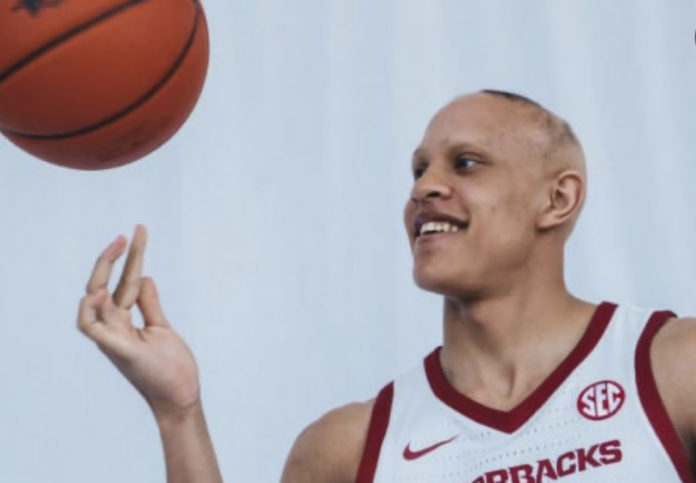 For years, we have heard of a “golden age” in terms of sheer basketball talent coming out of the state of Arkansas, especially the central part.

It’s now paying off for the Arkansas basketball program in a major way.

Pinion and Ford are Arkansas natives too.

This is shaping up to be Musselman’s second Top 5 recruiting class in his first three seasons with the Hogs and Arkansas’s highest finish since 1995-96. However, it appears Coach Muss isn’t done yet.

Jordan Walsh, a 5-star forward from DeSoto, Texas who ranks one spot below Smith on ESPN’s big board, has yet to make his college decision and the Hogs are heavily in play. Walsh is a 6-7 athlete who recently transferred to Link Year Prep in Branson, Missouri.

This school is considerably close to Fayetteville than Castaic Southern California Academy where Walsh intended on playing his senior year. A change in location should not be the deciding factor for fans trying to predict Walsh’s next move, but it is at least part of the puzzle.

It doesn’t hurt that Walsh and Smith appear to be friends off the court, and both have a chance to play together in college. Both recruits played at the Nike Peach Jam event this summer.

In a recent interview with 247Sports, Smith alluded to bringing more players to The Hill with him, saying “Coach Muss has it going, the football team has it going right now, just keep bringing that excitement to the state and have Arkansas on my back and bring some players on with me and try to make something happen.”

In this quote, Smith is referring to friend Jordan Walsh, as well as another 5-star recruit with the Hogs in serious contention for his final decision.

It should also be noted that current Razorback standout, Devo Davis, is a friend of Nick Smith Jr. and actively showed his excitement on social media at the mere possibility of Smith joining Davis and the rest of the Hoop Hogs.

Walsh plays a lot bigger than his 6-7 frame might suggest. With long arms and bounce-out-of-the-gym athleticism, Walsh is not far from being physically ready to bang down low with SEC bigs.

The lanky small forward is best when he gets the ball in position to make a play at or towards the rim. He’s got decent enough handling ability for a player of his size, but his calling card comes in the paint. His combination of height allows him to finish over nearly anyone at the high school level and will aid him tremendously in his transition to college.

Walsh also has a great basketball IQ, especially on the defensive side of the ball. He’s already displaying pro-level timing on blocked shots, steals, and securing defensive rebounds. Playing in an elite defensive scheme could allow Walsh to become a superstar on that end of the court if he continues to develop.

He likely won’t be asked to be the primary ball-handler at the next level, but Walsh does show flashes of smart and capable playmaking. He knows how to find open teammates and has the right tools and vision to complete difficult passes.

As you can see in the highlights below, the young forward also has a smooth jump shot, though he doesn’t often rely on that aspect of his game. Walsh has the potential to be a highly efficient, low-volume shooter at the college level, similar to current Razorback, Jaylin Williams. The 6-10 center only attempted 0.9 threes per game for the Hogs last season, but he made more than 30% of them.

If Walsh can be a 30+ percent shooter in college to go along with other elite aspects of his game, he has the chance to be special.

The potential addition of Jordan Walsh to what looks to be an already loaded Razorback roster has Hog fans drooling at the possibilities. Should Walsh commit to the Hogs when he announces his decision later in October, they will likely have the No. 2 recruiting class in the nation.

It should be noted that Jordan Walsh may not be finished visiting other schools.

“He’s been to USC and Kansas. He’s already been to places like TCU [and Texas],” says Arkansas basketball reporter Kevin McPherson. “Memphis. USC on an unofficial visit. Oklahoma and Arizona State. We don’t know if he’s going to follow through on plans to go to USC again or if it’s going to be Kansas, but we do know that he plans to commit this month.”

Not to get too far ahead of ourselves, but it would be shocking for Musselman to be satisfied even after landing his second ESPN Top 10 recruit. It’s also been rumored by insiders that another five-star forward has been in consistent contact with coach Musselman and staff.

Anthony Black of Coppell, TX is the #26 player in ESPN’s rankings and one of the highest uncommitted players left on the board. Oh, and the Hogs are at the very least in serious contention for his list of finalists.

It would likely take Walsh, Black, and a surprise third five-star recruit to have a chance at catching Duke for the #1 recruiting class.

Regardless, Eric Musselman woke the sleeping giant that is Arkansas basketball when he arrived two years ago. Since then he’s established himself as a great coach on the court, social media presence, transfer portal connoisseur, and now high school recruiter.

Here’s Kevin McPherson with the latest on Arkansas basketball (includes a practice report):