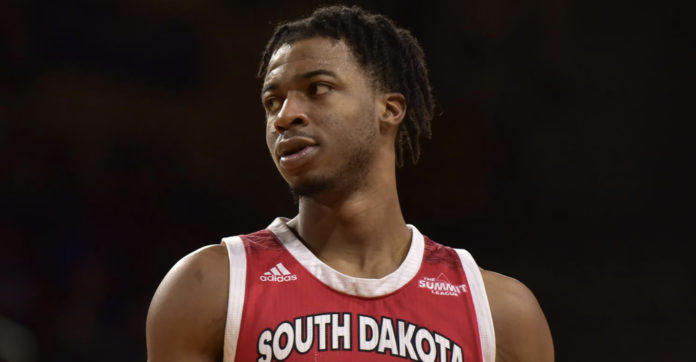 Following an excellent 2020-21 season, Arkansas men’s basketball coach Eric Musselman has yet again retooled his roster through the transfer portal.

Reaching into the transfer portal for additions like Chris Lykes, Au’Diese Toney, Trey Wade, and Jaxson Robinson were all important to Musselman’s plan. However, the Hogs lost 62 percent of their total points last season. Justin Smith and Jalen Tate were incredible finds by Musselman in the transfer portal last season as graduate transfers, and their absence this season will leave big shoes to fill.

Then, of course, Moses Moody left early for the NBA draft, where he was a lottery pick.

Clearly, the Razorbacks needed to find a proven scorer this offseason to replace Moody’s role as the No.1 scoring option and live up to their potential as national title dark horse contenders according to Arkansas Razorbacks NCAAB betting odds.

Umude is a 6-foot-6 pure scorer capable of playing either guard or forward. He’s set to join the Hogs next year for his fifth collegiate season. He attended Earl Warren High School in San Antonio, Texas from 2013-2017 where he averaged 23.2 points, 6.2 rebounds, 2.4 blocks, and 2.1 assists per game during his senior season.

He then committed to South Dakota where he played a total of 101 games over four seasons. Umude averaged 15.0 points, 5.4 rebounds, 1.8 assists, and 0.9 blocks per game over his career at South Dakota, including nearly 22 points, 7 rebounds, and 3 assists during the 2020-21 season.

During his time with South Dakota, the 22-year-old scored 30 or more points six different times, including a 41-point outing in a win over South Dakota State. Umude has played at least 10 minutes in seven games against Power 5 teams throughout his career. In those games, he averaged 16.7 PPG, 7.0 RPG, and 1.0 BPG.

That includes a monster 28-point performance on the road against the Kansas Jayhawks back in December of 2018. As you can see in the below highlights, he hit 50 percent of his threes, grabbed six rebounds, and dished four assists to round out his breakout performance at KU.

At 6-foot-6 and 210 pounds, Umude has all the physical tools necessary to be a top scorer in the SEC. He doesn’t bounce the air out of the ball or demand isolation situations to break down defenders. Instead, he exhibits exemplary footwork off the ball to get himself into position to catch, make a quick move or counter move, and then go up strong to score.

Though not a traditional big man or guard, Umude has developed scoring qualities often found at both positions. He can post up smaller players, easily shoot over most defenders, and can put the ball on the deck to create his own space with fancy footwork or a quick first step.

Umude’s bread-and-butter is in the midrange, though.

He has an uncommon ability to adjust his shots and floaters mid-flight to account for defenders and still finish the play. Granted, Umude has the ability to shoot from distance – he shot 35.5 percent from 3-point range last season – but he attempted only four 3-pointers per game last season compared to 12 2-point attempts. He also shot upwards of 51 percent from inside the arc.

The biggest concern when looking at Umude’s game is his ability to compete defensively. He’s got the physical tools to be a useful team defender, but he’s never been known as a lockdown one-on-one defender.

In fact, sports-reference.com shows Umude having a negative impact on the defensive side of the ball during his senior season, posting a -1.5 Defensive Box Plus/Minus (DBPM). This is a metric used to estimate defensive points contributed by a player compared to a league-average defender. For reference, Moses Moody posted a 2.3 DBPM during his lone season with the Hogs, and Justin Smith and JD Notae recorded 2.7 and 3.1 respectively.

This isn’t something to hit the panic button about just yet, however.

Musselman is an adaptive coach who plays to his players’ strengths on both sides of the ball. He will likely put Umude in a position to succeed within the team’s defensive scheme, especially considering the length and versatility of the entire Hogs’ roster next season.

It’s also worth noting that Smith and Notae both set new career highs in this defensive metric during their first season under coach Musselman.

Umude is an interesting player in today’s game because he is not overly reliant on the 3-point shot like many young players are. He’s also boasts an above-average mid-range game with the ability to shoot over smaller defenders and worm his way around bigger defenders, making him a true tweener between the small forward and power forward positions. Many of his capabilities can be compared to DeMar DeRozan’s game.

Standing at 6-foot-6, DeRozan spent time playing shooting guard, small forward, and power forward last season for the San Antonio Spurs. He scores most of his points from the midrange or in the paint, finding ways to shoot over and around defenders.

It’s becoming increasingly uncommon for guards to post up smaller players since plays like this don’t often lead to 3-pointers or layups, but DeRozan is still a master of the midrange post-up. This is likely influenced by his love of the late, great Kobe Bryant. DeRozan developed the footwork and athleticism to put himself in positions to score from anywhere inside the arc.

The players differ slightly in athleticism and 3-point shooting. While DeRozan is likely to end up on SportsCenter for highlight dunks, Umude is much more likely to adjust around taller defenders to finish tough layups or draw fouls.

The newest Razorback is also a much more capable 3-point shooter than the 12-year NBA veteran who has only made 28 percent of his attempts from behind the arc during his career.

Another, perhaps more familiar, comparison for Stanley Umude’s game is recent Razorback, Jimmy Whitt. Whitt spent a lot of his time running the offense and guarding the other teams’ best perimeter players, things we likely won’t see much of from Umude. We will, however, see shades of the former Hog in Umude’s mid-range game.

Like Witt, Umude has the length needed to get his shot off over defenders once he finds his spot. Umude has more of a traditional shooting form than Witt’s unorthodox, but effective, high release. Both players like to live in the midrange area, an art that’s said to be lost in the modern game for more than 16 years now.

Umude won’t replace Moses Moody’s production entirely, but he’ll likely be the closest thing the Hogs’ have to Moody this season. Moody is more of a true shooting guard and weighs five or 10 pounds less than Umude, but both are score-first wing players who rely on their IQ, length, and footwork to get them open looks rather than their ability to break down defenders in ISO situations.

Umude is more of a small forward/power forward type of player, but don’t forget that Moody spent some time playing power forward for the Hogs last season during their ultra-small lineups with Justin Smith at center.

Umude’s scoring ability will likely afford him the opportunity to take over Moody’s role as the No. 1 scoring option for Musselman next season. Off-ball screens, set out-of-bounds plays, and early sets will likely be drawn up for Umude before anyone else, much like Musselman did for Moody last season.

Upon announcing his transfer to Arkansas back in April, Umude received some of the best praise a modern player can earn from coach Musselman who said Umude “will give us the ability to play position-less basketball.”

This essentially means that Umude can fit into virtually any lineup and succeed. The game is evolving to be “positionless” at every level, and Musselman seems to be well ahead of the trend.

Muss later said “[Umude] can do so much. He can post up against equal-sized or smaller players, he’s got a great turnaround jump shot, he can make face-up threes, he can rebound the basketball, especially as a defensive rebounder.”

“He’s a good runner of the floor,” the coach continued. “He’s in that perfect size range for us where we can play him at the off guard if we had to and we wanted to be big and be a post-up team for a few possessions at the off-guard spot. We can play him at a natural small forward or power forward.”

Check out his full suite of skills here:

Expectations for Umude at Arkansas

Don’t be surprised to see Umude lead this team in scoring. With so many new faces, it’s often hard to predict who fills what role before seeing them all in action together. Players like Chris Lykes and Au’Diese Toney also have a strong case to lead the team in scoring. However, there’s no fortune-telling needed to see the offensive talent within Umude.

When a player transfers from a smaller conference to a bigger one, things like beating defenders off the dribble or overpowering smaller players can often be lost due to better competition. This shouldn’t be the case for Umude, who relies on his high basketball IQ, footwork, and impeccable midrange jump shot to support his game.

Umude will likely start at one of the forward positions alongside Au’Diese Toney, but it’s possible we see one of the two transfers lead the bench unit alongside JD Notae. I fully expect Umude to earn the starting job, however, due to his overall experience and ability to score with the best of them.