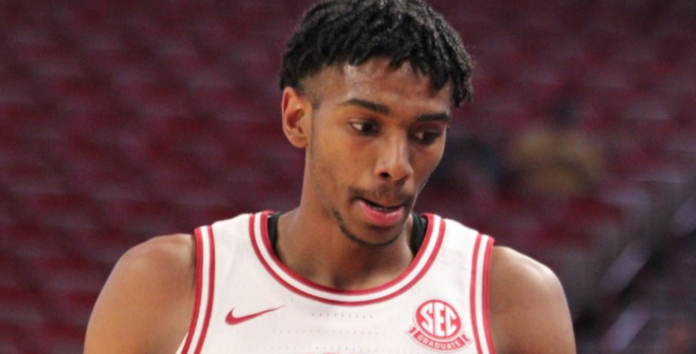 Throughout November and December, the Razorbacks defied all expectations by storming through their schedule with only one loss. The surprise factor didn’t stem only from the fact that Arkansas is in the first year of a new coach.

It also came from the shortness of Eric Musselman’s roster — literally and figuratively. Nearly halfway through conference play, the Hogs’ lack of height is catching up, a major factor in losses to LSU, Kentucky and Mississippi State.

Now, however, the lack of a deep bench is also starting to take a toll.

In SEC play, Musselman caps his rotation at seven players, with three of them (Mason Jones, Jimmy Whitt and Isaiah Joe) playing at about 35 minutes or more per game.

Heading into a pivotal road game against Alabama, the Hog will try to shake an SEC losing streak of three with three of their best players injured.

UPDATE: The Hogs were able to knock off Alabama, with Whitt pouring in a huge game. Joe, however, scored 0. Details here:

Isaiah Joe  – Joe’s tendonitis, which kept him from playing  against TCU last weekend, continues to bother him. To get more rest, he was held out of 60% of Thursday’s practice, Musselman said.

Desi Sills – In terms of shooting, Sills has been up and down this season. In terms of effort, Sills sets the standard for giving all-out effort night in and night out, regularly sacrificing his body on forays to rim that draw fouls and rack up And-1’s.

That body can take only so much, however.

Sills sprained his ankle in the Hogs last game, a loss to South Carolina, and is battling that now. He, too, is less than 100%.

Jimmy Whitt – This is the one that should worry Hog fans.

Whitt suffered a kneeing in the back of his calf against South Carolina that kept him out of all of Thursday’s practice. “He kind of has a semi-dead leg — it hit a nerve, Musselman said, adding Whitt is “the guy that we’re most worried about.”

Arkansas didn’t have Joe against TCU, and still won, but losing Whitt would present a bigger challenge. First off, the next game is on the road. Secondly, Whitt has been Arkansas’ second-most productive player in SEC play, behind only Mason Jones.

The traditional stats speak for themselves:

The advanced stats, per Sports-Reference.com, do as well.

Thanks to an outstanding true shooting percentage of 55.4%, Whitt has a Player Efficiency Rating of 18.1 — second-highest on the team. His Win Shares per 40 minutes (.123) also trails only Jones.

If Whitt has to sit out at Alabama (12-8, 4-3), expect fellow graduate transfer Jeantal Cylla to get the most playing time in his stead.

Here’s some more insight into that game, which airs at 5 pm on Saturday, from Musselman. He starts by praising Alabama’s head coach:

“Nate Oats does a great job. I really like watching his team play. I like to watch them on TV if we’re not playing. They’re fun to watch, one of the fastest pace teams in the country. They space the floor, play with interchangeable parts where guys can play multiple positions.”

“They shoot the three really well. [John] Petty’s shooting 47% from three… And he’s averaging over seven boards a game… They hardly ever take a mid-range shot. From an analytics standpoint, they probably do as good a job as anybody — meaning shots of the rim, pace, free throws attempted and three balls. They’re probably as good as anybody in the league. Any time you’re got a point guard with speed like Kira Lewis — he’s a phenomenal player.

“I think they’re a really, really talented team and it will be a challenging game for sure… We’ll have to have great transition defense, which we haven’t had. I don’t know why, because we don’t offensive rebound. But if we don’t get back on defense, they’ve proven that they can hang 90 on you easy.”

On where Arkansas needs to most improve:

“We do have shoot better percentage as a group. Like I said, as you look at our team’s [three point percent] and we’re .280 or whatever. It’s go to improve. The only way I know how to improve is maybe we got to deliver the ball better, more on target, more on time. Maybe we have to set better screen a lot of things. There’s a lot of thing we can continue to get better at, for sure.”

On bouncing back from a close South Carolina loss at home:

“[On film] we saw a lot of things we could do better. Having said that, I do think the team plays hard. Sometimes that’s the most important thing as a coach — that you can ask your teams to try to play with great effort. Again, we keep the scoreboard for a reason and we came up on the wrong end of it.”