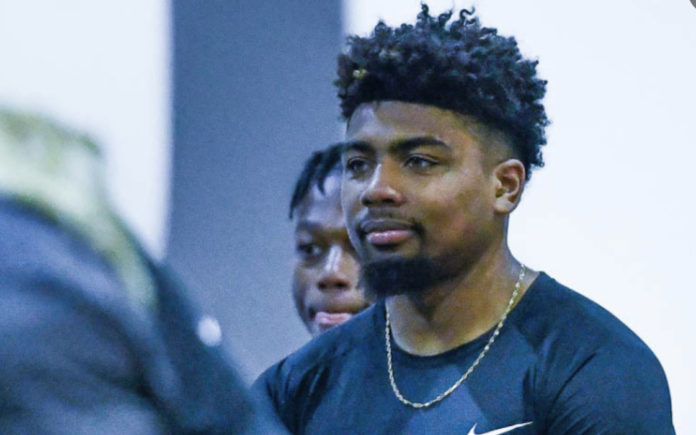 My college composition professors used to tell the class that starting a piece with a rhetorical question is a poor opening. It’s what junior-high students do when they’re first beginning to write essays.

So I started with that paragraph instead before landing on the hackneyed device.

Why in the world do we care anything at all about Pro Days or combines?

I write such a trite remark – and do so in first-person – because, frankly, thinking that pro days and scouting combines matter is, in and of itself, tired. Old hat. The world figured this out with Mike Mamula in the mid-1990s. Yet, somehow, the masses continue to think a player’s performance on one special day is going to outweigh everything that player did on the field.

Now, I’m not exactly old-fashioned. I don’t subscribe to antiquated measuring sticks exclusively like ‘the eye test.’ Sabermetrics in baseball are a good thing. The shift *was* a good thing. Sports need to evolve. But pretending that a player who measures well in running or weightlifting or jumping or whatever athletic endeavor s/he undertakes in a one-off evaluation six months before a season starts should outweigh results on the field is ludicrous.

That isn’t to say none of it matters. It’s just that the combine and Pro Days are more spectacle than anything else, especially for our football-obsessed sporting culture. They’re an excuse for TV time and column inches (the irony of such a statement is not lost on this writer, either). The size of a quarterback’s or wide receiver’s hands can give an indication to the possibility that they are a better thrower or catcher of the football. They’re not infallible, however.

Take Arkansas football’s best player last year, Treylon Burks. The man is a freak. He has hands nearly the size of the actual Greek Freak himself, Giannis Antetokounmpo of the Milwaukee Bucks. Antetokounmpo is is a 6-foot-11, 243-pound ‘small’ forward and perhaps the NBA’s best player. Burks is about 6-foot-2 and 225 pounds. His hands being the size of an elite basketballer is relevant. It’s just not all that useful for projection.

Dudley Dawson, a friend and fellow and sportswriter for Hawgs Illustrated, recently went on the Hit That Line to give his take on the whole situation. The opening of the below interview was tremendous. Dawson didn’t bother going to Arkansas’ Pro Day. It’s unclear why and I would never want to provide conjecture, but there’s a reason I didn’t go: I didn’t care.

Nor should you. Dawson outright said the day mattered little for Burks or even the other former Razorbacks in attendance. At least, not when it comes to long-term NFL futures. Certainly a player could jump out and have such a whale of a day they get an extended look in an NFL training camp they may not have received otherwise (think AJ Derby, Cody Hollister, as recent examples). For the best of the best like Burks, however, there was no real significant movement on projected draft boards.

Treylon Burks in the 2022 NFL Draft

Burks’ work on the field speaks volumes more. He left Arkansas after three seasons, before he could completely re-write the top of the Razorbacks receiving record books. Even as is, he’s the top-ranked receiver who spent just three seasons on the team when it comes to those accolades. Burks has lived solidly in the first-round projections since before Arkansas’ regular season began. Some had him going in the high single-digits. Others in the 20s.

Prognosticating about the NFL Draft, though, has become such a hobby and pastime for even the most casual of fans it’s like entering a bracket with your co-workers: someone is going to get it exactly right who probably had only a layperson’s familiarity with the whole ordeal.

The Warren, Arkansas, native had a slower 40-yard-dash time at the NFL combine earlier this week than scouts wanted to see. He ran it in 4.55 seconds. Not ideal for a position that usually fields the fastest players in the sport. You know how much his stock dropped? Negligibly. ESPN’s Todd McShay has him slotted at No. 22 to the Raiders.

“Burks provides excellent ball skills, the ability to break tackles and 6-foot-2 size in the red zone. His combine performance didn’t wow many scouts, but the tape shows why he produced 1,104 receiving yards and 11 touchdown catches in 2021,” McShay wrote.

“Tape shows why…” Yes. It does. Burks, of course, said the same thing following Arkansas’ Pro Day on Wednesday.

Frankly, I can’t remember someone catching him once he broke into open space. Besides, once he is captured, he’s hardly toast. With such a big frame, his ability to break tackles exceeds that of most of his brethren at the position. Unfortunately, “broken tackles” isn’t something measured at Pro Days or combines.

Sure, maybe one day Treylon Burks flames out in the NFL because he simply did not measure up in arbitrary measuring contests before he’d ever stepped foot into a pro practice. But in an age when so many guys who shock and awe at their pro days fall apart faster than the guys whose game-film suggested more quality than those numbers in a controlled environment might have, don’t count on it.

Burks is a freak, indeed.