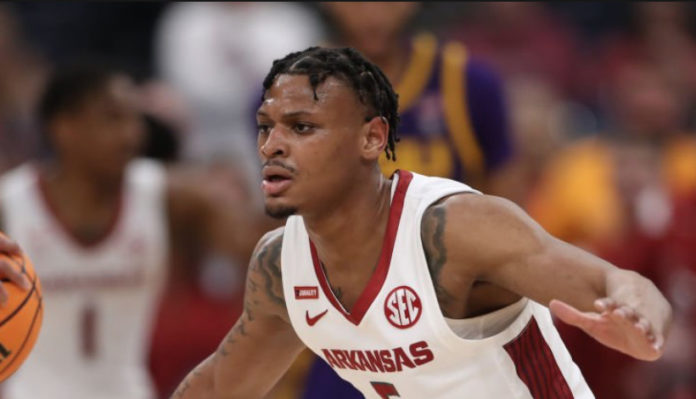 The Razorbacks carried a few question marks into the postseason, but none were bigger than the status of Au’Diese Toney. The 6-6 transfer tweaked his ankle in the second-to-last game of the season against LSU, causing him to miss the regular-season finale against Tennessee – a game in which Arkansas lost by only four points. After reports surfaced of Toney traveling to Tampa, FL with the team for the SEC Tournament despite being in a precautionary walking boot all week, his status became the center of attention for Razorback fans.

Toney has been the Razorbacks’ best perimeter defender all season and plays a vital role as a cutter and rebounder on the offensive side of the ball. While it’s hard to claim his presence would have pushed the Hogs to a win against the Volunteers, his absence against the three-headed monster of high-IQ guards was obvious.

Fortunately for Razorback fans, Toney made his return felt in their first game of the SEC Tournament, a 79-67 statement win over the LSU Tigers. Toney started hot, hitting the first shot of the game from behind the arc. He finished with 22 points, his highest as a Razorback and third-highest of his career, to go along with 10 rebounds to give him his third double-double of the season. His final dunk as time was expiring and the Hogs were already up 10 held an unspoken statement to both LSU and the rest of the teams set to face the Hogs: “I’m back.”

Now Arkansas turns their attention to 8-seeded Texas A&M after their surprising 67-62 upset over the Auburn Tigers. It too bad Auburn point guard Zep Jasper, whose layup attempt got annihilated by Quenton Jackson on Friday, won’t get his shot at the Hogs after all.

What to Expect When Texas A&M Has the Ball

Speaking of Quenton Jackson, the Texas A&M basketball offense runs through the senior guard, especially during their recent string of wins. Texas A&M has won seven of their last eight contests including their win against Auburn. In that span, Jackson is averaging 19.8 points, 3.4 rebounds, 2.1 assists, and 2.4 steals per game while shooting 63% from the field, 50% from 3-point range, and 87% from the free-throw line. In two games against Arkansas this season, Jackson scored 14.5 points on 47% FG, 14% 3P, and 91% FT shooting. The 6-5 guard has been on a tear, likely earning him a chance at being defended by Au’Diese Toney when they face the Hogs again.

Wade Taylor IV, a 6-0 freshman, has given the Hogs most trouble in their previous meetings, however. He’s averaged 18 points against the Hogs this season on 58% from distance, including a 25-point outburst in the Razorbacks’ overtime win in Bud Walton Arena. The two guards have also combined to average 10 free throws per game against the Hogs. The Razorback guards containing this pair of scoring Aggie guards could prove to be the key to Arkansas winning on Saturday afternoon.

Au’Diese Toney, as noted, stepped up in a major way to help Arkansas secure the victory against LSU. He’s not generally known for his scoring contributions, but this was Toney’s 11th game of the season to score double-digit points on 54.5% or better shooting from the field. Any time the Razorbacks can get a double-digit scoring outing from Toney, it’s a bonus.

Arkansas basketball transfer guard Chris Lykes joined Toney with an unexpected scoring performance of his own, pouring in 18 points that included a personal 7-point run by the undersized guard late in the game. He went 5-9 from the field and 7-8 from the free-throw line while playing a huge role in breaking LSU’s menacing full-court press. He also finished the game with only one turnover, a major bonus for the Hogs considering Lykes tends to play fast and out of control.

JD Notae quietly had a big game as well, scoring 19 points to go along with six rebounds, four steals, and three assists despite shooting only 4-14 from the field. He will undoubtedly find a little more consistency as the Hogs continue their post-season push, though he only shot 30% from the field in neutral site games prior to the victory over LSU on Friday.

Texas A&M averages the second-most steals (9.9) in the SEC during conference play, but they also average the second-most fouls per game (19.4) in the conference. They like to gamble defensively, something both JD Notae and Chris Lykes should be able to take full advantage of. Both guards thrive in getting to the free-throw line and converting once they get there.

Arkansas as a team is first in the conference in free throws made per game (16.7) and third in free throw attempts (22.3). The Hogs will have to continue to be aggressive against what is likely to be a worn-down Aggie squad coming off of two games in the last two days. Forcing Texas A&M into foul trouble will serve as a double-edged bonus for the Hogs – allowing them to get to the free-throw line and putting more pressure on the Aggies’ bench players.

The Hogs’ victory over LSU gave them three wins against the same team in a single season for the first time since 2001 when they swept the three-game series against the LSU Tigers. The win came in dominant fashion with Arkansas leading most of the second half and capping off the victory with an exclamation-point finish.

The Razorbacks will be riding high off of this victory as they continue to put stifling defensive pressure on the Texas A&M guards, holding them to shooting splits below their season averages. The Razorback role players like Toney, Umude, and Lykes will continue to have a major impact as coach Eric Musselman gets his team ramped up for the NCAA Tournament. JD Notae leads the way offensively like usual, and the Razorbacks advance to the SEC Championship game vs either Kentucky or Tennessee.