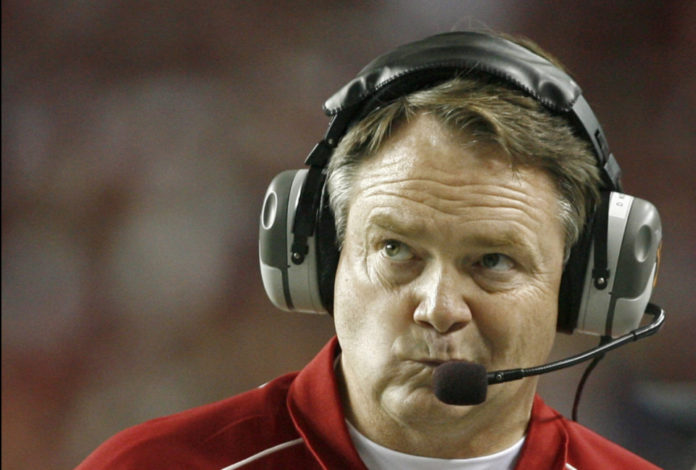 From the homeboy successfully lobbying  to come home over bigger names flirting with every opportunity knocking, to achieving spectacular early success, Pittman’s path of the 2020s mirrors Nutt’s of the 1990’s.

Right down to changing agents, from an Arkansas-based agent to the  same man – super agent Jimmy Sexton. Let’s look at the similarities.

Little Rock’s Nutt was the heralded Central High quarterback and childhood Razorbacks War Memorial Stadium ball boy who became a 1976 Razorback for Frank Broyles. With Ron Calcagni and Kevin Scanlon looming ahead on Arkansas’ quarterback depth chart under then head coach Lou Hotlz, he was largely forgiven for transferring post 1977 to Oklahoma State. But he never seemed to leave Arkansas entirely even when gone.

He quarterbacked Oklahoma State’s 1980 Cowboys against Arkansas, returned to Arkansas as a 1983 graduate assistant under Holtz and fulltime as 1990-92 receivers coach under Jack Crowe and Joe Kines. He was on Danny Ford’s first Arkansas staff when in 1993 Murray State  hired him as head coach.

When Broyles fired Ford after the 1997 season, then first-year Boise State Coach Nutt unabashedly sought the Arkansas job. Nutt’s No. 1 competition, Arkansas native/Ole Miss CoachTommy Tuberville, played it cool, coyly juggling  the Arkansas opportunity with what he had at Ole Miss and likely any other opening he could eye. Before becoming an Alabama U.S. senator, Tuberville hop-scotched from Ole Miss to Auburn, and after being fired at Auburn, abandoned Texas Tech during a recruiting weekend for Cincinnati.

Nutt’s contrasting Arkansas-only fervor won over the UA’s hiring committee, just as Pittman’s enthusiasm would win over Hunter Yurachek 22 years later. Nutt then won over the state debuting as an SEC West co-champion 9-3 off consecutive 4-7 teams of 1996 and ’97.

Those 4-7 teams had some talented players toughened by Ford but just needed an enthusiastically encouraging hand.

That fit Nutt’s M.O. to perfection.

Sam Pittman isn’t an Arkansas native but grew up an Arkansas fan in nearby Grove, Okla. He became as Arkansas as Old Main during his 2013-2015 tenure coaching Razorbacks offensive linemen (who other coach would compare himself to King Kong Bundy?). Pittman was exceedingly downhome popular with those he met and so successful and beloved by the Razorbacks he coached that players lobbied for him to Yurachek and boosters.

Later, as Georgia’s offensive line coach, his all-or-nothing seeking Arkansas stood out among other candidates like Lane Kiffin and Mike Leach. They had the head coaching pedigrees that Pittman lacked but so obviously juggled opportunities playing one off against another with Arkansas seemingly the least among them.

So Yurachek bought in to the coach who was all Arkansas and assured fans that “Arkansas will be my last job.” Arkansas’ athletic director has almost entirely been happily sold ever since, although we are not sure what he thinks of Pittman and Sexton’s widely reported ask for an extension that would nearly double his current contract.

Off the Chad Morris 2-10, 2-10 overall/0-16 in the SEC era Pittman inherited an abysmal situation compared to what Nutt inherited, but it wasn’t entirely dissimilar.

Players Pittman inherited like Grant Morgan, Bumper Pool, Montaric Brown, Treylon Burks, Myron Cunningham and Ricky Stromberg are winners that were just trapped on losing teams. And they needed a quarterback, the position Morris randomly spun like a roulette wheel but Pittman more than solidly provided. First with grad transfer Feleipe Franks in 2020 and nurturing Morris holdover KJ Jefferson to start in 2021.

A 3-7 entirely SEC season 2020 debut (that was just one bad call and two down to the wire games from being 6-4) heightened Pittman’s Arkansas profile. It went up a few more levels with this year’s 8-4 record heading into the Outback Bowl where odds can be found with all the NCAAF picks before the games kick off. Penn State comes in as 2.5 point favorites or -125, so close to a coin toss when picking.

However Pittman knows there’s some Arkansas apprehension believing his “Arkansas will be my last job” pronouncement. It stems upon his recent switch from Little Rock agent Judy Henry, who negotiated his Arkansas hiring, to Sexton.

Pittman was on guard last week when asked about his agent change.

He implies that type of representation doesn’t represent a threat to look elsewhere.

“I’ve said that I would never leave the University of Arkansas and I’m not going to,” Pittman said.  “Getting an agent doesn’t mean that I’m leaving.  I’ve said this is my last job and it’s damn sure going to be that.”

One way Pittman better assures longtime Arkansas football coaching tenure is doing what he and Sexton can to help his assistants and himself short of linking Pittman’s name to vacant jobs. And rebutting with a quick “No” if others link him to an opening.

Razorback Coaches Get While the Getting’s Good

Nutt got away with being  financially rewarded when Nebraska came in with a highball offer (the exact figure of which was later legally disputed) after the 2003 season while Nutt’s popularity was still very high.

Not long afterward, Nutt was linked to the LSU vacancy. That, combined with his 2004 Hogs dipping to 5-6, cost Nutt dearly,

It weakened him for forthcoming chasms. He didn’t have the horses by then to resist the Broyles’ push to bring Gus Malzahn in as an offensive coordinator, which Broyles too late realized wasn’t a good fit. It seldom is a good fit, after all, to force a coordinator upon a head coach when that coordinator isn’t the head coach’s preference.

The fallout from that and other issues dominated what should have been a heralded 2006 SEC West championship unselfishly starring Darren McFadden and Felix Jones. It ushered the end of the Nutt and even Broyles’ Arkansas eras by the close of 2007.

Gray mused that if an Arkansas football coach got linked to an opportunity elsewhere and didn’t quickly quash it, he’d better take it. Particularly, it can be added, if you have played Arkansas and only Arkansas as your ace card.