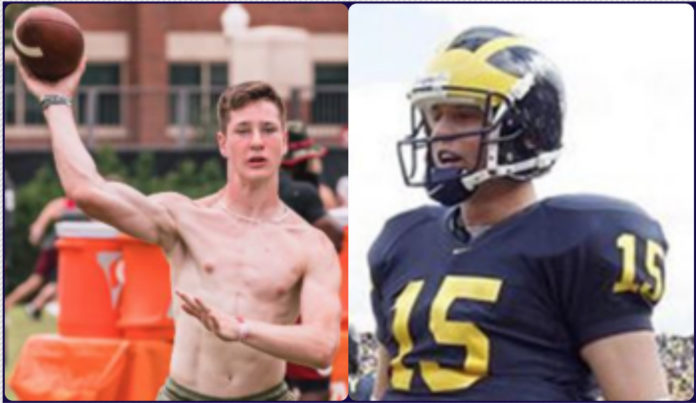 In 2006, one of the few 5-star caliber quarterbacks that the state of Arkansas has produced committed to play for the Michigan Wolverines.

That was Ryan Mallett, arguably the most naturally gifted native Arkansan ever when it comes to pure pocket passing.

Fast forward 15 years, and history may be repeating itself.

On Friday, the Michigan football program offered a scholarship to Kane Archer, a 13-year-old who has already shown potential to one day join Mallett and Mitch Mustain as the state’s only five-star quarterbacks in the modern era.

Archer is a nearly 6’1″ 172-pound Greenwood, Ark. native who is ranked by most youth football recruiting outlets as the No. 1 quarterback in the class of 2026.

That means Archer is a rising eighth grader. Yes, that’s young. And, yes, it’s hard to project how players this young will perform five, six years into the future.

In the past decade, we’ve seen a 13-year-old quarterback (David Sills) pledge to USC and wind up as a wide receiver. We’ve also seen a 14-year-old quarterback (Tate Martell) commit to Washington and kill it in the high school, but then bounce around like a pinball on the collegiate transfer market.

Clearly, five years out, there’s no such thing as a sure bet when it comes to college success — but that shouldn’t diminish the fact that Martell topped out at 5’11”.

Kane Archer is different. As you can see in the video clip below, he has the kind of physical frame — even in junior high — that should grow into the kind of 6’3″, dual-threat quarterback with 10″+ hands that major colleges seek. Already, he throws with the velocity of high schoolers:

And it matters that he’s already benefiting from plenty of high-level football camps and training from professional quarterbacks like Lamar Jackson.

Michigan is the second school to offer Kane Archer, who appears to be the all-time youngest Arkansan recruit to receive a major college football scholarship offer.

The Wolverines were on Archer because Michigan football coach Jim Harbaugh was familiar with Kane from the national youth football circuit, according to Best of Arkansas Sports’ Tommy Tabler (Tabler’s interview with Kane Archer is forthcoming on this site).

As you see in the above Tweet, Michigan isn’t shy about marketing the fact that Tom Brady, whom many agree is the greatest quarterback of all time (besides Terry Bradshaw), was a Wolverine.

The fact Brady played for UM in the late 1990s was something the Michigan football program could have used to entice the last Arkansan quarterback it pursued: Ryan Mallett.

Years before he rewrote the record books for the Razorbacks, Ryan Mallett was just a fan trying to get into Arkansas football games for free.

A Batesville native, Mallett moved with his family to northwest Arkansas when he was four years old.

While living in Lincoln, he used to help his older sister park cars at Reynolds Razorback Stadium. That job came with benefits. “We got to go sit on the grassy knoll [on the north side] and I used to try and catch the field goals,” Mallett said in a Hog Pod interview with Bo Mattingly.

“That was my way to get in the game without having to watch it on TV or listen to it on the radio.”

When he was in fifth grade, his family moved to Texarkana where his late father, James Mallett*, coached. They lived on the Arkansas side but Mallett would attend Texas High, on the Texas side, in part because of his mom and dad taught on the Texas side.

It also meant that he honed his skills against much tougher competition than if he had stayed on the Arkansas side. (Kane Archer is now doing the same against out-of-state competition by playing for the Kansas City Outlaws youth football team.)

Although he was a diehard Arkansas football fan, he chose not to attend Arkansas because of the drama surrounding the program in 2006-07.

“There was just a lot of stuff going on in the Hill, and I just didn’t want to be a part of it.”

A rumor circulated online right before this time that Houston Nutt, then Arkansas’ coach, wanted to switch Mallett from quarterback to tight end while recruiting him the summer before his junior year. But that played “absolutely no part of me not deciding to go to Arkansas,” Mallett told Mattingly.

“I had been to the Arkansas camp for eight years, so I’ve done all those drills. I just wanted to go catch the ball and I wasn’t really doing too much, I was doing some one-on-ones.”

“Well, my coordinator from high school calls my dad because he heard about it. He said, ‘Nope, get him out of there. He better not get hurt before a season.’ So it got blown up to a way bigger deal than it was.”

As much as some fans (and Wally Hall) questioned Nutt’s decision-making, why would he not want to see the No. 4 recruit in the nation keep doing things like the below at the college level?

Some of Mallet’s high school highlights are simply jaw-dropping:

As Mallett recalls, Michigan started recruiting him in the winter of his ninth-grade year, when Michigan played Texas in the Rose Bowl.

The Texas coaches were already familiar with Mallett through his high school coach. So, when Michigan’s quarterback coach asked his Texan counterpart if there were any good quarterbacks in the area, the first name that came up was Mallett’s.

From then on, that Michigan football coach pursued Mallett.

“Every day that he could, he wrote or texted or called me from then on — when it was recruiting period, not dead period, and all that good stuff.”

In the end, Mallett chose to join Jim Pace and Zach Adami as the best Arkansans to ever play for the Wolverines.

“I loved it at Michigan, actually,” Mallett said.

“Just running on that banner and there’s 110,000 people there, it was pretty cool. I think it’s even more now, with the new boxes they got in there and they play night games, but to me it was a pretty cool feeling being 18, 19 years old.”

That first time Mallett experienced that, he was supposed to play in the second half against Appalachian State. But he stayed on the sidelines while watching this all-time upset unspool before him:

As a freshman, Mallett threw for 892 yards with seven touchdowns and five interceptions.

Good, but nothing like the greatness he would achieve later as the Razorbacks’ quarterback.

“As much as I love my teammates there, I didn’t see myself even probably getting on the field that next year with that offense they brought in,” he said. Arkansas, then coached by Bobby Petrino, was a better first.

Mallett announced he was transferring out of the Michigan football program after a single seaosn.

“My decision to leave was also the best decision for my career type move.”

“I mean, that’s what it comes down to. Even back then there was rumors I was homesick and all that. I was like, ‘No, this is the best decision for me.”

The Arkansas football program hasn’t yet offered Kane Archer, but if he keeps improving at this rate, it seems likely the Hogs will offer at some point.

While the fact Missouri and Michigan have offered him is newsworthy and shows how legit this precocious talent is, it’s also worth adding another caveat: Almost all college football coaches offering teens who won’t step onto campus for another five years can’t guarantee they will still be there in half a decade.

The average tenure of major college football coaches, after all, just keeps getting shorter and shorter.

The chances aren’t great that Jim Harbaugh, on the hot seat five years into his Michigan football coaching tenure, will still be there in 2026.

Arkansas football fans hope Sam Pittman will still be their coach in five years, but a lot can change between now and then. The chances of Arkansas offensive coordinator Kendal Briles still being in the same position in half a decade appear very small.

Consider that if Briles again improves the Arkansas offense in 2021, even keeping him from going off to become a head coach this winter will be hard enough.

So, all the caveats aside, let’s just enjoy Archer’s moment with Missouri and Michigan for what it is: further proof that the state of Arkansas produces, on a per capita basis, some of the best (jr.) high school talent in the nation.

And read this exclusive interview with him here:

Just the past week, Ryan’s father passed away in Farmington at the age of 64.

A Wynne native, “Jim Mallett was the type of coach every parent would choose their athlete to have. He was tough, but loved his athletes and encouraged them to be their best on and off the field,” his obituary states.

“He taught them and his children to be leaders not followers.”

“Being a devoted family man, Jim was happiest when he was surrounded by his children, grandchildren, and all of his nieces and nephews.”

“Jim’s boisterous, loud laugh was one you don’t forget. His sense of humor and the many pranks he played will live on in the memories of many with whom he coached and taught.”

He had two children: Ryan and Lauren.

Nate Allen, the longtime Arkansas sportswriter, gave me some good insight into where Mallett ranks among the best to ever come from the state.

“Of the native born Arkansas quarterbacks I have covered since 1973  Ryan Mallett and Brad Taylor by far sported the strongest arms,” he emailed me.

“Both were hellacious competitors capable of making a team play beyond itself. Scott Bull was not skill gifted but big, strong, tough and a leader with enough talent to get Frank Broyles’ last SWC championship and play in the NFL for the San Francisco 49ers.”

“Matt Jones was the most dangerous of any Arkansas quarterback I ever saw.”

“I remember those wanting him to play receiver, which I knew was absurd. When you’ve got one above all others that needs the ball, and a team that needs him to have the ball, what better way for him to get the ball than snapping it to him directly?”

Arkansas’ top-rated commit is from Michigan: