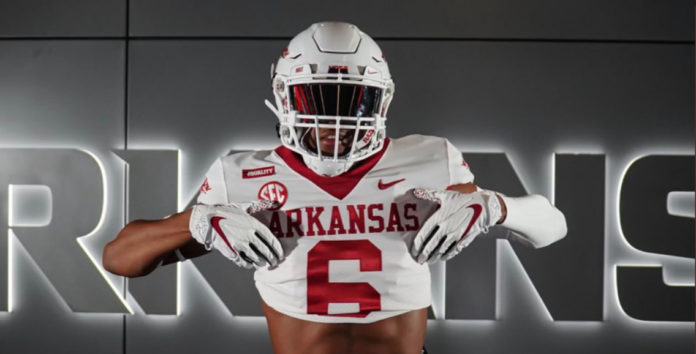 The class of 2022 in Arkansas football is one of the most talented that the state has seen in recent years. In this list, I’m looking at its best players.

I rank these rising seniors based this on what I feel the prospects mean to their respective high school programs (how irreplaceable they are) and the number of Division I programs that have pursued them in recruiting. You’ll notice this Top 10 list of prep Arkansas football players shows just how widely distributed the talent is throughout the state.

In the list below, I provide the college program to which the recruit has committed, as well a high school preview for the 2021 season, and a look back at how they performed in 2020.

The four-star prospect out of Joe T. Robinson is a beast on the offensive line, although he has also played on the defensive line. Harris was offered his first athletic scholarship as a freshman. The young man is a powerhouse at 6-7 and 375 pounds. Harris has earned 14-scholarship offers.

The offer sheet is an impressive one including Alabama, Georgia, Miami, Memphis, Louisiana Tech, Oklahoma, Texas A&M, Mississippi State, Missouri, TCU, Tennessee, Texas State, and Ole Miss. Success for Harris has the possibility of transitioning to success for the Joe T. Robinson Senators. Robinson has a strong rushing attack led by Daryl Searcy, who has racked up offers from Arkansas State and North Texas.

Look for a strong season out of Robinson with a deep playoff run if injuries can be avoided.

The Fayetteville wide receiver is one of the most explosive receivers in the country. Sategna uses his excellent speed to create separation from the opposing defensive backs. He ran the 100-meters in 10.9 seconds, and he uses that speed well effectively on the football field.

Last season, Sategna hauled in 41 receptions for 823 yards and eight touchdowns. Sategna, works effectively at the outside wide receiver spot or in the slot. Fayetteville is a loaded football team at the skill positions and have playmakers on the defensive side of the ball.

The Purple Dogs are a team set for a deep playoff run and possible conference championship.

The Clarendon wide receiver has played all over the field for the Lions. However, where McAdoo is going to be at the next level is the wide receiver position. McAdoo has incredible athletic ability, as the highlights below show. He does a great job of using his athleticism to keep the opposing defensive backs off balance.

Clarendon is a talented team, and the potential is there for a deep playoff run. Keeping McAdoo and Dax Courtney involved is going to be key for the Lions.

Chamblee is the anchor for an impressive Maumelle Hornets’ offensive line. Over the past two seasons, Chamblee has done a fantastic job at the left tackle position. Chamblee has the quick feet that college scouts are looking for, and the size at 6-6 and 290-pounds to be a force at the next level. Maumelle is a talented team; however, the Hornets have to find a way to get through Pulaski Academy and Little Rock Christian.

Fans should expect to see the Hornets play into November.

Joe Himon is one of the most versatile running backs in the state of Arkansas. He is all over the field for the Pulaski Academy and former Bruins head coach Kevin Kelley.

Last season, Himon rushed for 1,925 yards and 23 touchdowns. However, he was not done there, Himon was on the receiving end of 80 passes for 1,068 yards and nine touchdowns. The Pulaski Academy running has excellent speed, running a 4.48-second forty-yard dash in May.

The Bruins are always a talented team so a deep playoff run, and an excellent shot of a state championship may be on the horizon for this team under new head coach Anthony Lucas, the former Arkansas football great.

Pulaski Academy certainly has the potential to accomplish this goal.

Jointer is a playmaker and a threat to score from anywhere on the field. He is a running back that Parkview is going to rely heavily upon again this season. Last season, Jointer racked up 1,105 rushing yards on 162 carries and he was able to punch the ball in the end zone 10 times.

Jointer has terrific speed; he runs the forty-yard dash in 4.4 seconds. The Parkview Patriot has 30 scholarship offers with some of the headliners being Indiana, Arizona State, Florida State, Colorado, and Kansas State. He is going to be a big part of Parkview’s offense and the potential is there for both him and the Patriots to have a strong season.

One of the most improved teams in the state last season was the Parkview Patriots. White is a player that has played both the safety and linebacker positions with equal effectiveness with a nose for the football and explosive pursuit of the ball carrier. He is a fierce hitter and 22 programs have taken notice of his talent.

Parkview being in the same conference as Lake Hamilton, Greenwood, and Benton means they play a loaded conference schedule. However, the Patriots have plenty of talent so a playoff run should be expected.

The running back that is going to see plenty of carries this fall is Isaiah Broadway. The Sylvan Hills Bruins operate out of the flexbone offense and the quarterback and running back get plenty of usage. Broadway battled injuries last season in rushing for just 203 yards and four touchdowns.

However, Broadway did not lose any of the 4.5-second forty-yard dash speed while earning 19 scholarship offers. Plenty of powerhouse programs like Michigan State, Washington State, Baylor, Houston, and Utah to name a few are in the mix for his services. Sylvan Hills won 6-A East conference championship, and should they avoid injuries this season, expect the Bears to make a playoff run in November.

The talent in the wide receiver position grouping is incredibly strong this season. Nimrod is a playmaker with impressive hands. He simply won’t drop passes thrown in his vicinity. In 2020, Nimrod caught 35 passes for 781 yards and 12 touchdowns.

That’s led to Nimrod picking up 16 scholarship offers with Arkansas, Illinois, Indiana, Kansas State, and Washington State as some of the powerhouse programs in contact with Nimrod. Bentonville is an extremely talented football team that could make a deep run at a 7-A West conference title and do signifiant postseason damage.

Davillier has received scholarship offers from Nebraska, Penn State, Auburn, Georgia and Oklahoma to name a few. The Maumelle Hornets are going to be a difficult team to square off against this season. A deep playoff run is not out of the question for the Hornets.

A list like this is never easy to do because of the fact the state has plenty of talented guys that could have easily been on the list. Here are a few guys who have earned honorable mention: Timothy Dawn Jr.-Camden Fairview-Baylor commit, Daryl Searcy-Joe T. Robinson-Undecided, Kaden Henley-Shiloh Christian-Arkansas commit, Kaiden Turner-Fayetteville-Indiana commit, J.J. Hollingsworth-Greenland-Arkansas commit.

I love doing preseason lists, because I like having the opportunity to go back to see what I got correct and where I was wrong. Whether right or wrong, the bottom line about the list is that all the players on it are going to produce one way or another.

Fans should enjoy seeing such talented prospects on Friday nights.

To see a quarterback who could show up on this list in a few years, make sure to check out this feature on Kane Archer: