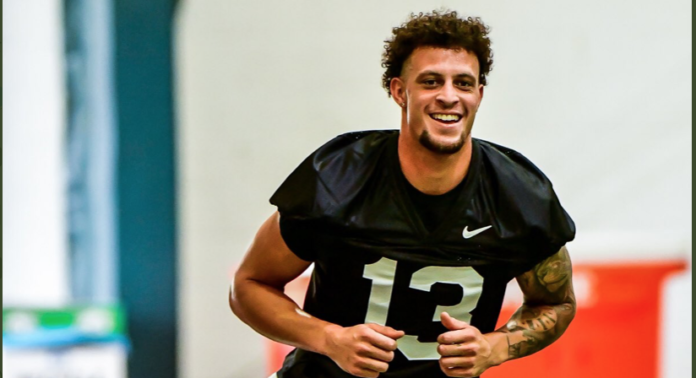 There may be some debate about the best quarterback in Razorback history, but for more than a decade now there hasn’t been any question about the identity of the strongest-armed gunslinger in program history.

That title unequivocally goes to Ryan Mallett, the nearly 6’7″, 245 pound missile thrower out of Texarkana who shattered passing records left and right in the Bobby Petrino era. Mallett had one of the strongest arms college football has ever seen.

In high school, Mallett threw a ball 86 yards, which is very impressive by any standard.

Arkansas’ likely starting quarterback for 2020, Feleipe Franks, has the strongest arm of any Razorback since Ryan Mallett. His strength, size and pretty delivery have earned rave reviews in Arkansas’ fall camp so far.

So much so that the Arkansas Democrat-Gazette’s Tom Murphy compared the 6’6″ 238 pound Franks to the Razorback great.

“Every pass that I’ve seen Feleipe Franks throw, either on video, been released by the school, or what I saw Wednesday, has been on the line, has been tight spirals,” Mallett said. I’ve seen nothing wobbly.”

The biggest difference, Murphy noted, is that Franks is more mobile than Mallett. “Even though he’s coming off the ankle, severe ankle injury with surgery, he’s just going to be more mobile.”

Murphy is referring to the season-ending ankle sprain that Franks suffered in the third game of 2019. At Florida, Franks had a 13-3 record as a starter in the 2018 and 2019 seasons before being lost for the year against Kentucky with a dislocated ankle. That’s when Kyle Trask took over and led the Gators to 11 wins to secure the starting job, prompting Franks’ eventual transfer.

But Franks had already proven himself a high-caliber quarterback before then.

Feleipe Franks finished the 2018 season with one of the best seasons from a Florida QB since Tim Tebow. As a redshirt sophomore, he had  2,457 passing yards on 188-322 throwing (58.4%), 24 passing touchdowns, seven rushing touchdowns, and another 350 yards on the ground. Perhaps his most impressive stat was only throwing six interceptions, which was down from eight interceptions in 2017, despite him throwing the ball over 90 times more. His 24-6 TD-INT ratio was 17th best in the nation.

In the same way that Mallett benefited from the coaching of Bobby Petrino to take his game to the next level, Franks enjoyed learning under quarterback whisperer Dan Mullen at Florida. (Mullen has also coached great college quarterbacks like Alex Smith, Tim Tebow and Dak Prescott.)

Now, Franks is under the tutelage of Arkansas offensive coordinator Kendal Briles. Briles and the Arkansas staff will use Franks in different ways than he was used at Florida.

“Unlike Mullen, Briles isn’t likely to use Franks as much in the QB run game,” writes Donovan Keiser of SI.com. .”Briles likes to push the pace and get aggressive with his playcalling, which fits Franks’ skillset like a glove. Briles is a fan of stretching the defense vertically, which is one of Franks’ biggest strengths as a quarterback provided his arm power. Arkansas will be willing to go for it all, as they will be the underdog in almost every single game they play this season. They’ll play with nothing to lose, which could be dangerous for any SEC that they will face.”

Here’s a nice Franks to Burks connection from today. The Hogs could use 30-35 of these this season pic.twitter.com/WrBR8ObZTN

Murphy noted that Franks has the Mallettesque ability to squeeze in passes into almost any hole in the defense.

Relying on a cannon arm can come with a downside, too. Mallett’s biggest weakness at Arkansas was overconfidence in his arm, which often led to interceptions.

The same has been the case with Franks. As Yahoo Sports notes, “The holes in Franks’ game are sometimes glaring. He will stare down his targets, throw high and wide and try to squeeze passes into tight windows that shouldn’t be attempted.”

If Franks can overcome this weakness while getting above-average protection from an improved offensive line, he has the chance to put together a season for the ages.

“I’m not going to sit here and say I’m going to be the person who makes that decision. I want us all to feel good about it. I feel like I’m going to have probably a pretty strong opinion, but hopefully Feleipe will be what we think he is. There’s still going to be competition, but I would say it’s going to be his job to lose.”

“I think it’s going to take a couple of weeks to figure out exactly which guy we feel like can lead us to victories,” Briles said. “You’ve got to get in the fire. You’ve got to go in scrimmages and obviously we’re going to protect our quarterbacks, so they’re not going to get hit. But we have guys like Feleipe who have game experience. And, shoot, really all of them. Jack and John and KJ, all of those guys have played. That doesn’t bother me.”

The Pig Trail Nation analyst said: “I’ve felt all along that the only thing that would keep him from being the starter is if that ankle injury was causing a problem. Clearly it is not. I’ve been impressed with Franks since the 2018 season. He’s got a strong arm and unlike Arkansas main two QBs from last year, he can run which gives him options that they didn’t have. Do yourself a favor if your not familiar with what he did at Florida. There’s a lot of YouTube video of his games at Florida. Watch that stuff. Dan Mullen doesn’t put bad quarterbacks on the field.

For more insight from Irwin, including his take on an SEC coach who disparaged Kendal Briles, see this Q & A: