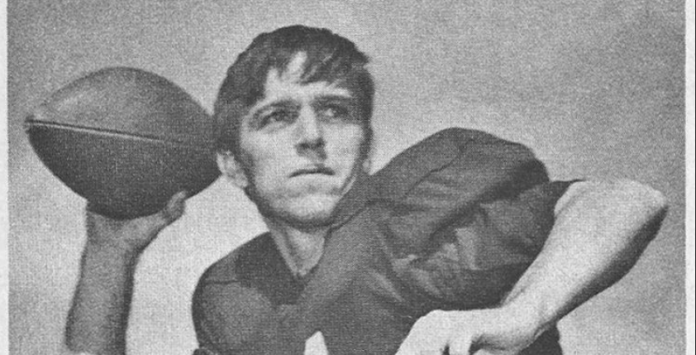 Below is Part 2 of my feature on former Arkansas quarterbacks which originally ran in Arkansas Life magazine.  Click here to see Part 1. – Evin Demirel

Joe Ferguson
Years Lettered: 1970-72
Ranks with Mitch Mustain as the most highly touted high school quarterback to ever sign with Arkansas. The record-setting dropback specialist also went on the most successful pro career of any Razorback QB.

After College: After an 18-year NFL career, worked in real estate before a 1997-2000 stint as Arkansas’ quarterbacks coach. Then re-entered real estate, becoming a vice president for Lindsey & Associates.
Residence: Bella Vista, Ark.

After College: Played three seasons with San Francisco 49ers. Since 1979, has been the CEO of Pace Industries, LLC, the leading die cast manufacturer in North America.
Residence: Fayetteville

Ron Calcagni
Years Lettered: 1975-78
First quarterback of the Lou Holtz era, Calcagni led Arkansas to an 11-1 record including a stunning 31-6 upset of Oklahoma in the Orange Bowl. Heading into the season, the Hogs were been picked to finish sixth.

After College: Played in the Canadian Football League for three years, then started a coaching career that has included stops at high school, CFL and college levels (including a 1983-86 stint as QB/wide receivers coach at Arkansas State University). Has coached Pulaski Heights Middle School in Little Rock since 2009.
Current Residence: Conway, Ark.

Kevin Scanlon
Years Lettered: 1978-79
Led Arkansas to a 10-2 record in 1979 for a share of the SWC championship as conference offensive player of the year. His 66.2% completion rate that year remains an all-time record.

Tom Jones
Years Lettered: 1979-82
His tenure wasn’t as successful as predecessors’ but did help lead the Hogs to a mid-season 42-11 romp of No. 1 Texas in 1981. It was the program’s largest win ever over Texas.

After College: Moved to Little Rock and worked for a general contractor until 1987, when he returned to his hometown of Ruston, La. There, he took ownership of Triad Builders, a mainly commercial construction business, from his father “Dub” Jones. He still works in the same building as his 88-year-old father, a former Tulane All-American football player who later coached Hall of Famer Jim Brown at Cleveland.
Current Residence: Ruston, La.

After College: Worked for Chambers Bank in his hometown of Danville until a few years ago. On his Yell Country farm, has raised cattle and pigs – up up to 2,500 at one time.
Current Residence: Belleville, Ark.

Quinn Grovey
Years Lettered: 1987-90
An explosive triple-option threat, this former Arkansas quarterback led the Hogs to consecutive SWC titles in 1988-89. In 1988, the Hogs went undefeated in conference for the first time in 23 years.

After College: After a brief stint in the Canadian Football League, Grovey returned to northwest Arkansas in 1994. Has since become a human resources manager at Home Depot and is entering his 16th season reporting Hog games for the Arkansas Razorback Sports Network.
Current Residence: Fayetteville, Ark.

Years Lettered: 1992-95
A starter for much of his four seasons, most memorable wins came near the start and end of that tenure. In 1992, Arkansas announced its arrived in the SEC with a 25-24 upset of No. 4 Tennessee. Three years later, Lunney led Arkansas to its first win over Alabama and first SEC West championship.

After College: Worked as an assistant at Tulsa and San Jose State before an 8-year stint as offensive coordinator and quarterbacks coach at Bentonville High School. In January, was hired as Razorbacks’ tight ends coach.
Residence: Rogers, Ark.

Clint Stoerner
Years Lettered: 1996-99
Led Arkansas to a SEC West co-championship in 1998, and a 27-6 Cotton Bowl win over Texas the following season. Arkansas’ most prolific passer of 20th century.

After College: Played for Dallas Cowboys, then in AFL as well as NFL Europe. Moved to Little Rock and has worked in insurance since 2010. Helps run Stoerner & HaVas Insurance Agency, Inc., and since May has co-hosted a morning sports show on 93.3 FM.
Residence: Little Rock

Like BestOfArkansasSports.com? Support more features like this by shopping for your favorite Razorback gifts, ornamentation, books and films at our Amazon store!

Matt Jones
Years Lettered: 2001-04
The best running former Arkansas quarterback of all time, became the program leader in total yards (8,392) and touchdowns (77). Also, ahead of the pack when it comes to total gasps caused. Jones led the Hogs through a six overtime game and a pair of seven-overtimers.

After College: Drafted by the Jacksonville Jaguars as a wide receiver and last played in a regular season NFL game in 2008. Moved from northwest Arkansas to Little Rock in 2012 and became co-host of a sports show on the Buzz 103.7 FM.
Residence: Little Rock

After College: In 2009, returned near his home in the DFW area to coach quarterbacks and teach world history at Byron Nelson High School..
Residence: Northlake, Texas.

After College: Drafted by Oakland Raiders. Waived, but signed to Oakland’s practice squad in September.

The above originally ran in Arkansas Life magazine. Click here for Part 1.