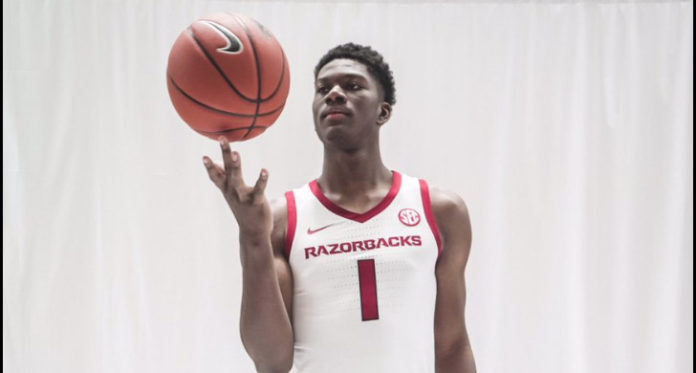 On the court, Eric Musselman has gotten off to the best two-year start in Arkansas basketball history.

He’s also put together one of the best recruiting classes the program has ever seen with a class of 2020 showcasing four four-stars in Moses Moody, Jaylin Williams, Devo Davis and KK Robinson.

For all Musselman has already accomplished on the Hill, however, one thing he hasn’t yet been able to do is land a consensus five-star player. Sometimes, getting such a player is a matter of being in the right place at the right time, as it was with Mike Anderson and Bobby Portis or Nolan Richardson and Corliss Williamson (who would have been a five-star if such rankings existed in the early 1990s).

Sometimes, however, it’s a matter of being a ridiculously good recruiter who has produced a winning program many blue-chip recruits across the nation wanted a piece of

Nolan Richardson certainly was that, landing the equivalent of five-star players in Darnell Robinson from California and Kareem Reid from New York City.

Kijani Wright, a 6’9″ five-star inside player who appears to be sculpted from 228 pounds of granite, has the Arkansas basketball program in his top 7.

Wright is an extremely efficient player who doesn’t waste time either from beyond the arc with a compact, fluid touch or inside with an array of hooks and more traditional post moves, as you can see here:

Wright, whom ESPN ranks as the No. 16 recruit in the class of 2022, also takes a cerebral approach to the game that will serve him well in college and beyond:

“I don’t think I have a game where it’s like I go out there and score every time,” he told Gilbert Arenas in an episode of “No Chill.” I like to facilitate, pass the ball, give my teammates the ball.”

Wright has only taken an official visit to four schools so far, with the most recent being Arkansas last week.

“It’s really special to meet them face to face and really have that in-person bond,” Wright told the Arkansas Democrat-Gazette’s Richard Davenport.

“Everyone here is really genuine,” Kijani Wright added. “Nothing is fake really, so I really value when people are true to themselves and what they mean.”

“A source told me on Arkansas’ side of things from their perspective, that it couldn’t have gone much better,” Arkansas basketball reporter Kevin McPherson said on Pig Trail Nation.

“…He said that Arkansas exceeded his expectations and what his preconceived notions were, Arkansas’ coaching staff, what he saw on his visit, taking in practice both days that he could, during his visit early in the week — everything pointed to him that he could see himself as a Razorback and playing in Fayetteville.”

As far how Musselman and the staff would actually employ Wright, Wright told Davenport:

“They play 5-out, so of course being a stretch 4 I would be able to handle the ball, shoot the ball, really play position-less basketball, which is what I want to play as well as what Coach Muss envisions me to play if I were to come here.”

Signing Wright won’t be easy with other elite programs like Stanford, Kansas and Michigan State in the mix.

But the biggest threat of all is USC.

Wright is from Los Angeles, so his hometown USC Trojans are going to carry a lot of clout simply by proximity.

Like the Hogs, the Trojans are also a program on the rise. They reached the Elite Eight in March as well, and head coach Andy Enfield has already produced two bigs who have or will go in the NBA Draft lottery in Onyeka Okongwu and Evan Mobley.

Through AAU circles, Wright is highly familiar with these Trojans, as well as Enfield and his staff.

Wright plays for the Compton Magic, just as Mobley and Okongwu did before him.

I keep in contact with Coach (Andy) Enfield and Coach (Eric) Mobley,” Wright said in January.

“I have visited their campus, practice facility, and gymnasium. They have had and are still having success with guys from my Compton Magic summer team in Onyeka Okongwu and the Mobley brothers.”

“I feel they will let me play freely and help the team out as much as possible.”

So, is it pretty much a sealed deal? How much of a chance does Musselman and the relatively rural northwest Arkansas have when it comes to Kijani Wright?

“Yeah I’m a LA city-type of kid, but I feel like I fit in pretty much anywhere,” Wright told Davenport.

“I pretty much have a versatile personality. Never have a problem with people and I’m always looking to engage with anybody.”

“Just engage with people and just make them know my presence and just be friendly with anyone.”

So far, Wright has officially visited USC, Texas and Arkansas. He plans to also officially visit Kansas. Michigan State, Florida State and Stanford are also possible visits ahead of an expected college announcement before his senior year begins.

Toward the end of Eric Musselman’s time in Nevada, Musselman had built the Wolfpack up to such a level that he was able to get five-star recruit Jordan Brown out of northern California over the likes of Cal and Arizona.

Even though Brown underwhelmed in his lone season in Nevada, getting such a big name to a mid-major campus is probably Musselman’s single most impressive recruiting job so far at the college level.

But Nevada was pretty close.

The same can’t be said for Arkansas and Kijani Wright. That distance, and the ties USC and Wright already have, makes this signing especially challenging. Still, it’s possible Wright is looking to spread his wings and fly a bit, just like Alex Collins did coming out of south Florida as a blue-chip running back years ago.

If that’s the case, Arkansas could be the right fit.

Learn more about Wright’s trip, as well as other Arkansas basketball recruits, here:

And here’s a deep dive of an interview with Wright: